GIA has hosted its popular Alumni Association parties for more than 20 years during the annual Tucson gem and mineral shows. The festive events are full of delicious food and drink, dancing and socialising with friends and colleagues from across the globe.

But for one industry couple, the 2015 party was more than an enjoyable evening of networking – it was the backdrop for a life-changing night that would put them on new personal, professional and educational paths.

Robert Gessner, AJP, was enjoying the gem shows as part of his first visit to America. A geologist and field explorer from South Africa, he had been looking forward to the alumni party for months.

“I was going to reunite with all the field gemmologists, scientists and writers and editors whom I had hosted and got to know during trips to the mines in Africa over the years,” says Gessner, who worked for Gemfields at the time, after nearly a decade with TanzaniteOne.

As Gessner signed in for the party, a woman in line caught his attention. Los Angeles-based designer Melissa Spencer, GJG, was chatting with her GIA classmates, and wearing an oversized cocktail ring on her ring finger. He dismissed any notions of romance, but approached her to ask for a dance once GIA President Susan Jacques opened the dance floor and silent auction. 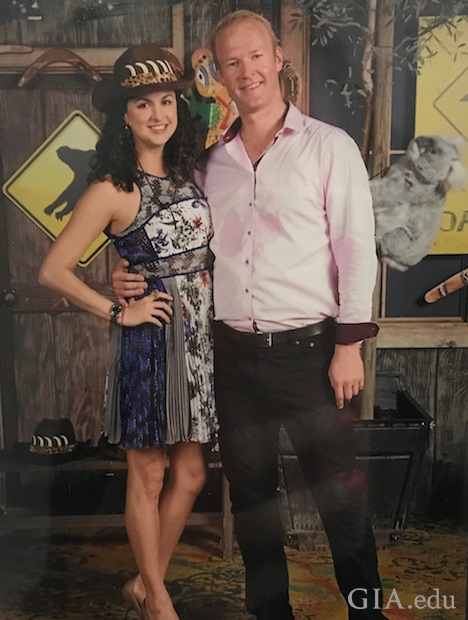 This photo was snapped at the annual 2015 GIA Alumni Association party in Tucson – the night that Robert Gessner and Melissa Spencer met. Spencer notes that by the time the picture was taken, “I’m wearing the heliodor ring on my index finger, so Robbie would no longer think I was taken.” Photo by GIA

When the two left the dance floor for refreshments, Gessner worked up the nerve to confirm her relationship status.

“I asked, ‘On such a fine evening as this, where is your husb...’ and whoosh, off came the ring,” he laughs. “Melissa said she wasn’t married and only wore the ring because it was one of her favourite designs and she wanted to impress fellow jewellers. It was like the stars and galaxies aligned. That was all I had to hear – we spent the rest of the night on the dance floor together and have been inseparable since then.”

The meeting changed everything for the couple: Gessner was already “being groomed” to become the general manager of Gemfields’ emerald mine in Zambia, but when he returned home the following week, he turned in his resignation letter.

“When you know, you know,” Gessner says.

Spencer, who had worked for high-end designers including Peter Norman and Steven & Co., had already followed her “lifelong dream” and opened her own company, Spencer Fine Jewelry, the previous year. Her Spencer Collection showroom, featuring a collective of designers, was thriving in Beverly Hills, and she was also involved in the local chapters of the GIA Alumni Association and the Women’s Jewelry Association. 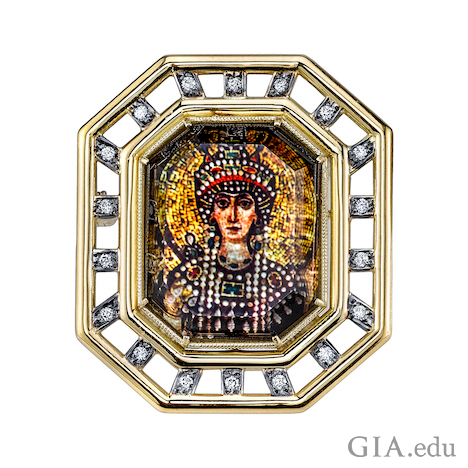 Award-winning designer Melissa Spencer, GJG, has created a proprietary process utilising photographs, rock crystal quartz and mother of pearl that’s become part of her signature pieces, Spencer Portraits. The Spencer Portrait Collections range in theme from butterflies to safari animals to angels, but the designer is primarily inspired by the Victorian era. This Spencer Portrait, Empress Theodora, showcases a print from the Mosaic of Theodora at the Basilica of San Vitale, in Italy. The 18K yellow gold piece, featuring mother of pearl, 15 carats of rock crystal quartz and .27 carats of diamonds, can be worn as a pendant or brooch.

The couple built their relationship over a long distance, with Spencer in California and Gessner in Africa, while he made plans to relocate to California. His goals were to earn his Graduate Gemologist diploma at GIA’s World Headquarters in Carlsbad, which he had considered since watching several of his mining colleagues earn their diplomas through Distance Education – and to propose to Spencer.

Gessner followed through, earning his GG on campus in March 2016, and presenting Spencer with a blue sapphire engagement ring. The couple married in the spring of 2017, each wearing jewellery that Spencer had designed to reflect their histories and journey as a couple, and settled in Los Angeles together.

Spencer, a Texas native raised by parents who nurtured her early love of design, has continued to find success with her company. She has won multiple awards, including the Carelle-WJA Award (in honour of Brooke Tivol McGrath) in 2016, and the JCK Editor’s Choice Award in 2017 for her Victorian-inspired designs.

Spencer’s signature design, Spencer Portraits, utilises a proprietary technique that took her over a year of experimentation to perfect. In the vein of the hand-painted portrait miniatures and reverse-intaglio carvings that inspire her, Spencer uses rock crystal quartz and mother of pearl to transform photographs into gemstone jewellery.

“I aspire to add my contemporary take to the legacy of sentimental jewellery,” she says. 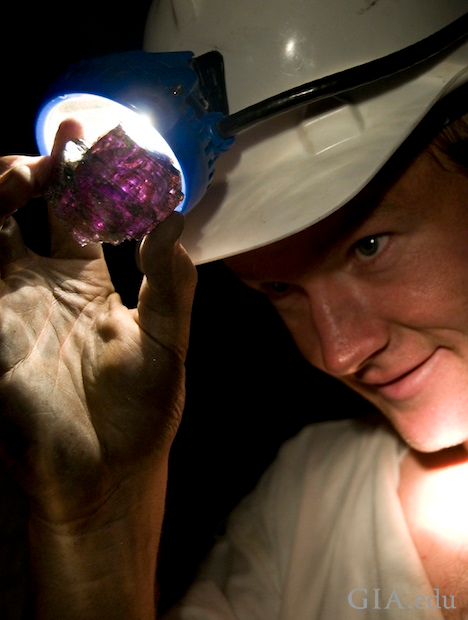 A large gem-quality piece of tanzanite is illuminated by Robert Gessner’s headlamp shortly after it was found. Most tanzanite requires heat treatment to attain its purple violet hue, but this piece was attractively coloured without heating. Photo by Brendan Laurs/GIA

Gessner, meanwhile, has opened his first business, Gessner Gems, in Los Angeles, and focuses on “the curatorship and sourcing of fine coloured gemstones for designers, jewellers and private clients”. He travels around the world to conferences, shows and industry events, and serves as a geology consultant to the colorued gemstone mining operations in East Africa where he previously worked.

Both Gessner and Spencer point to their GIA training as a foundation for their success, and say that they appreciate what Spencer calls the “genuine relationships and friendships” formed with classmates from around the world. Of course, the most important connections they made were not in a Carlsbad classroom, but at a “Down Under”-themed networking event in Tucson.

“I lost my heart at the GIA Alumni Party that year,” says Gessner, “and Melissa is taking wonderful care of it.”

Shenzhen: The Frontier of China’s Gem and Jewellery Industry

All jewellery professionals are familiar with the city of Shenzhen, a global jewellery manufacturing centre and the leader of China’s fast-growing gem and jewellery industry. Join the GIA team as we tour the city and discover more about its leading jewellery brands.