Demand at the 1-4 June JCK Las Vegas show met the expectations of the trade, despite declining attendance.

Finished jewellery exhibitors at the Mandalay Bay venue reported good orders – slightly better than last year for a number of them – but added that the show is always more about meeting, greeting and making new contacts than it is about writing business.

“Buyers looking for important pieces don’t usually place their orders here, but they come by and we talk with them,” said a designer in the Luxury Pavilion. “All the business is done later.”

Manufacturers with more commercial lines said all of their products are available for order online, so the show has become more of a place to listen to client concerns and take suggestions.

More and more jewellery manufacturers have been producing designs at multiple price points in the past few years. That trend accelerated this year, to the point where some lines offer a combination of rock crystal and manufactured crystal glass with gemstones set in vermeil and sterling silver, instead of 14k and 18k gold or platinum. Jewellery designs seen at the show trended toward thin swirling lines and many mixed precious and non-precious materials to maintain attractive prices.

Female self-purchase has become a very important niche for jewelry makers, so many are creating lines in the $500-$1,000 (£380-£760) price range to appeal to women who might buy jewellery on an impulse or put fine jewellery in a category competitive with other accessories. 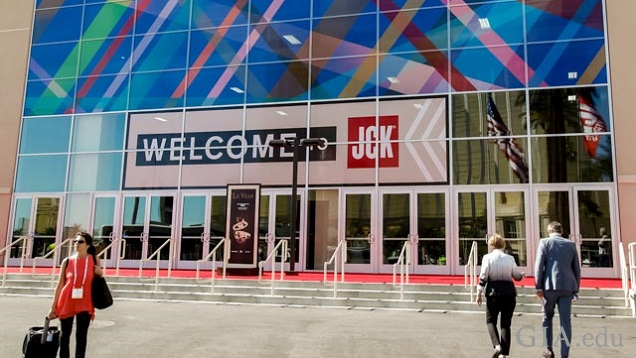 Attendance at the JCK Show was reportedly down from recent years. Photo courtesy of JCK

The story was similar at the Couture Show, which ran concurrently with the JCK show, where the emphasis is on designer jewellery shown by many of the best-known names. Diamond dealers at the show reported steady demand, but found cautious retailers.

“The major chains were here, and independents. Most were just buying what they needed in the short term and larger goods (generally 3 carats-plus) only against customer calls,” said one exhibitor.

There was interest in higher-end fancy pink and blue coloured diamonds, but supplies were few and calls were limited to stones under a half carat.

Coloured stone demand at the American Gem Trade Association show was generally slow throughout the week. Dealers reported that buyers were looking for unheated ruby and sapphire, fancy colour sapphire and some smaller stones for colour accents.

While the official buyer count was not released by the end of the shows, most exhibitors believed it was significantly down from past Vegas shows. The number of U.S. retail jewellers has declined by some 2,000 in the past three years, according to Jewelers Board of Trade figures, and international buyers, who used to comprise a significant portion of the show’s attendance, have other choices, including a greatly expanded Hong Kong show.

In addition, exhibitors noted that many clients order online, skipping the shows altogether.