Gems are valued for their beauty, rarity and durability. Durability is a gemstone’s ability to withstand wear, heat and chemicals. The concept of durability consists of three properties:

Hardness
The hardness of a diamond is a result of its very compact crystal structure. “Diamond has an indentation or scratch hardness that is five times that of carbides. [Figure 1] illustrates the hardness of diamond compared to other materials according to both Moh’s [sic] and Knoop’s hardness scales. However, diamond is relatively brittle and will chip or fracture if it is not handled and protected against shock” (V. C. Venkatesh and S. Izman, Precision Engineering, 2007, p. 50). Diamond is the hardest known natural mineral on both the Mohs and Knoop scales, which characterise a mineral’s scratch resistance through the ability of a harder material to scratch a softer material. 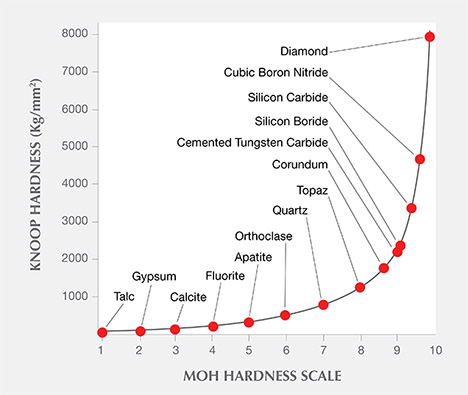 Figure 1. A comparison of the Mohs hardness scale and the Knoop hardness scale, a
micro-hardness test where a pyramidal diamond point is pressed into the polished
surface of a sample with a known load for a specified time and the resulting indentation
is measured with a microscope. Illustration modified from V. C. Venkatesh and S. Izman,
Precision Engineering, 2007, p. 50.

Toughness
Diamonds can chip or fracture from hard impact, especially in areas where the carbon atoms are not tightly bonded. These areas, called cleavage planes, are the major source of damage to diamonds (figure 2). The toughness scale used in scientific literature is called a fracture toughness scale, but it is rarely mentioned in gemmology. The toughness scale measures (in erg/cm2) the work required to separate two surfaces of a crystal along a certain crystallographic plane. Values for diamond generally range from 5,000 (along the cleavage planes) to over 8,000 (in the “hardest” direction). Compare those values to 225,000 for nephrite and 120,000 for jadeite, which are tougher, and 600 for corundum, which is not as tough. 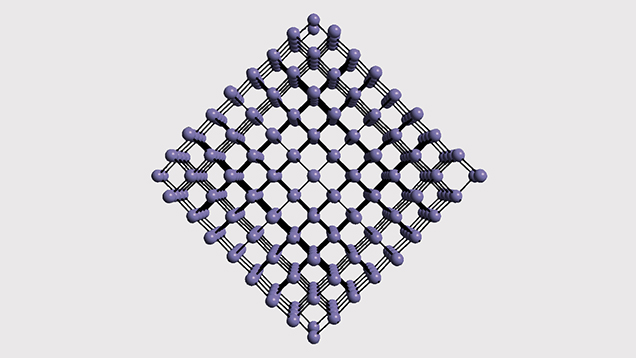 Even though diamond is the hardest natural material, it can chip and fracture in the course of normal wear. Diamond is formed in the cubic crystal system and has four perfect cleavage directions. A cleavage plane is the weakest direction in the molecular arrangement of the crystal. Diamonds are tougher in the directions where the atoms are bonded tightly together and less tough where they’re not so tightly bonded. The most common form of the natural diamond crystal is an octahedron (figure 3), and our focus will be on that typical shape. Cleaving is the splitting of a diamond crystal parallel to one of its triangular, octahedral planes. While not the perfect example, compare wood, which has a single grain typically split by an axe with ease. A natural diamond crystal can only be cleaved parallel to one of the triangular octahedral faces (figure 4). 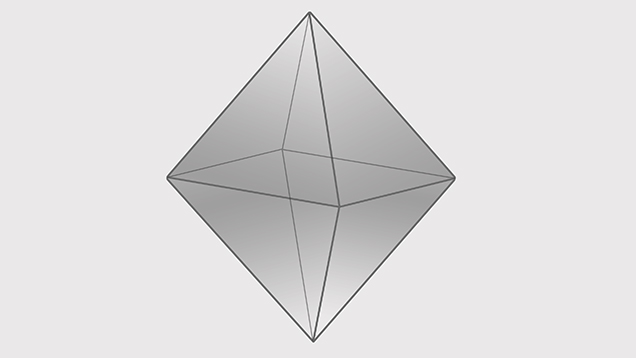 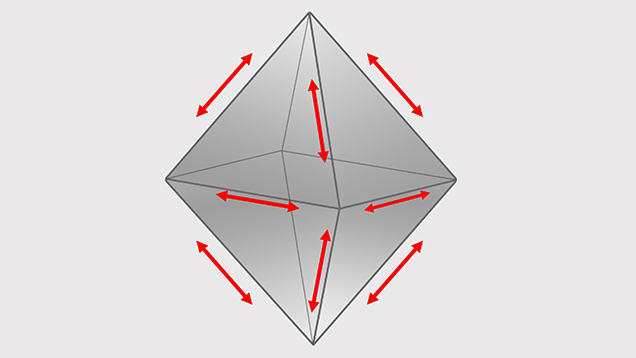 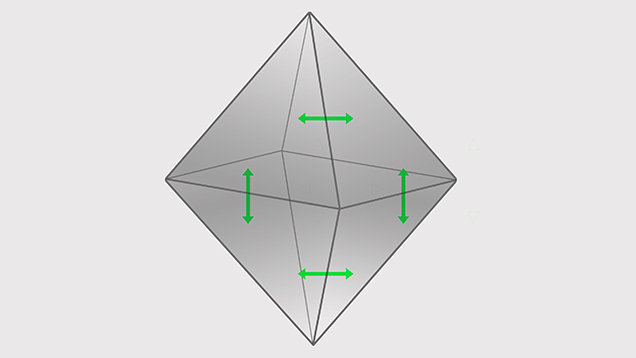 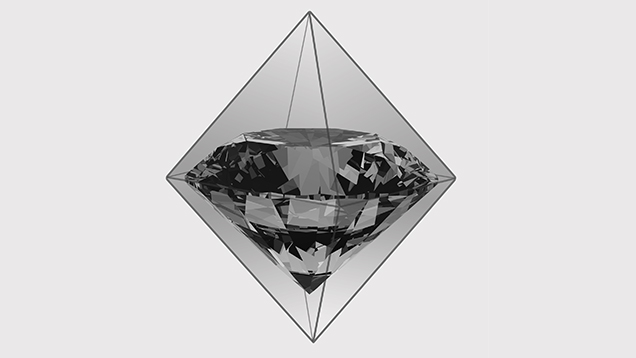 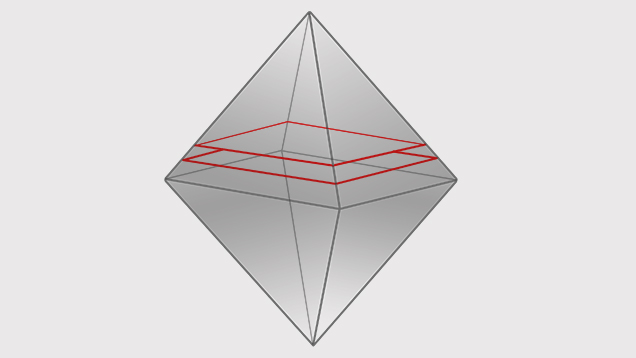 Figure 8. When sawn, the lower plane (lower red line) will eventually yield two princess-cut diamonds. If the crystal was being cut to yield round brilliants, the sawing line would be the higher line (upper red line). Illustration by Al Gilbertson, © GIA.

Remember that diamonds are tougher in the directions where the atoms are bonded tightly together, less tough where they’re not so tightly bonded. Look at the location of the corners on a princess cut, which are very vulnerable to chipping since they lie close to the cleavage plane. Cutting styles like these, with pointed corners or ends, are often set with prongs to protect the corners from chipping. Even so, a hard blow to a prong at a corner of a princess cut (figure 9) can cause a chip to run down the side of the diamond. This is not exactly at the cleavage plane, where the carbon atoms are furthest apart, but very near to it. When chips occur, they rarely look like smooth flat planes of cleavage. Rather, they appear to be stepped, because they are not directly on the cleavage plane (figures 10 and 11). 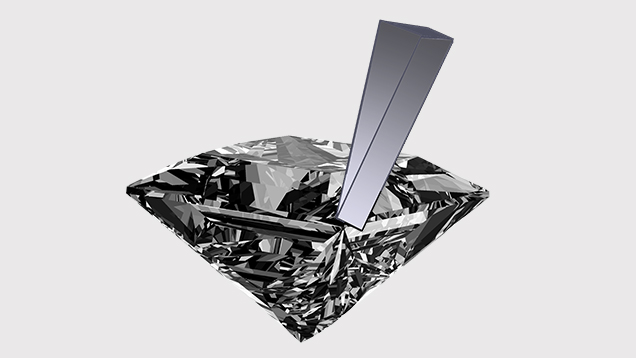 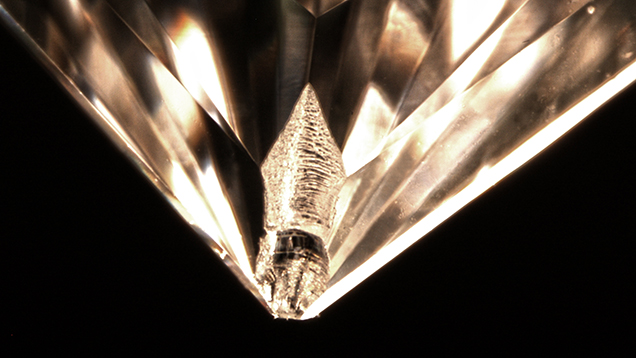 Figure 10. The chip at the corner of this princess-cut diamond has a stepped look since it is near but not directly on the cleavage plane. Photo by James Gibson, © GIA. 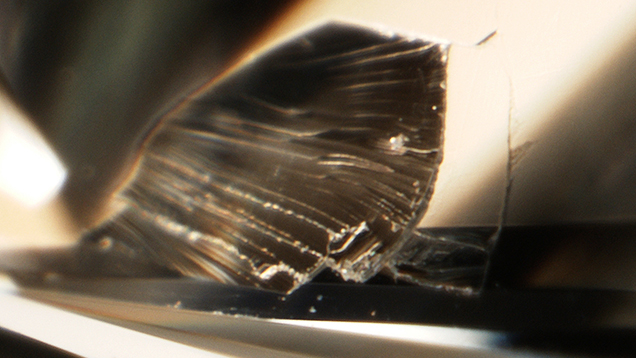 HOW TO MINIMISE THE RISK OF DIAMOND CHIPPING

Chips typically occur when the girdle (edge) or point of a diamond strikes something hard. Bathroom and kitchen counters, as well as jewellery items with diamonds worn next to each other, are common causes of chips.

1. Avoid shapes with points or sharp corners
Any shape of diamond with points or sharp corners is more exposed to chipping at those locations (figures 11 and 12). Round, oval and rounded-corner cushions don’t have that point exposure. A more recent cutting technique called chamfering is used by some in the diamond trade and is believed to improve durability for princess cuts. Chamfering places a very small flat facet on the corners (figure 13).

Figure 12. Corners for emerald cuts, triangular shapes, radiants and princess cuts are at higher risk and need an adequate girdle thickness to minimise their exposure to chipping. Here an extra facet at the corner of a princess cut brings that corner to a sharp point, resulting in a very high risk of being chipped. Photo by James Gibson; illustrations by Al Gilbertson, © GIA.

2. Protect the culet
At one time, almost all standard round brilliant cut diamonds and many other shapes were cut with a small facet at the culet. This was to protect the culet from chipping. Now most diamonds come to a sharp point at the culet, and thus all culets with points are vulnerable (figure 14). Once they are set in jewellery, however, there is little risk of damaging the culet.

4. Chose a setting that protects the diamond
Vulnerable points or corners are better protected with bezels, partial bezels or V-shaped prongs.

5. Use caution with tension settings
A tension setting holds a diamond in place using a groove cut into the metal that the girdle fits into, and the two ends of the ring press tightly against the diamond’s sides. A jeweller with experience in tension settings will be very careful about the condition of the girdle before allowing a diamond to be set in this manner.

6. Regularly inspect prongs for damage
A very common cause of chipping is that the prongs holding the gem in place in a piece of jewellery become bent or broken. If a diamond is loose in the mounting, it is at higher risk of getting chipped. Prongs protect their corners, points and sides. If the prongs become bent or broken due to wear and tear, they are not doing their job: protecting your diamond.

7. Don’t wear a diamond that has already chipped
If a diamond already has a chip, some think they can take care of the mounting later. That knife-edged portion of the diamond that is chipped has an extremely high risk of getting chipped even more badly. Stop wearing it until you can have it repaired. 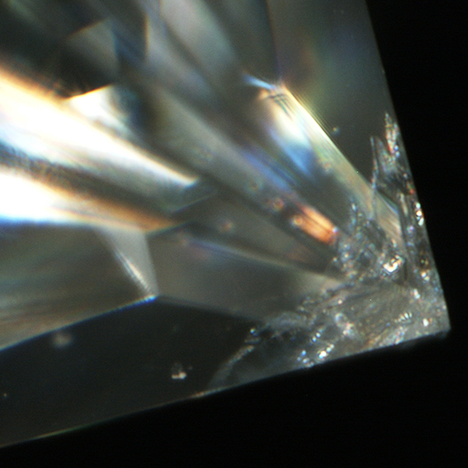 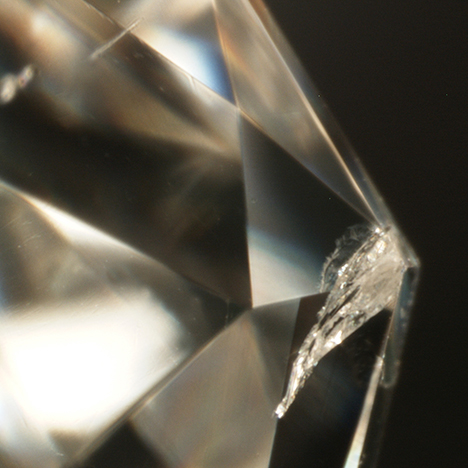 Figure 18. The corner of this radiant cut has a large feather that places it at risk of further
damage. Photo by Mitch Lam, © GIA. 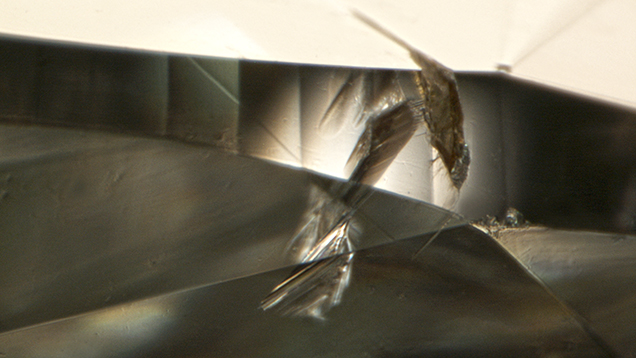 There is no such thing as perfect toughness. Any gem will break, not just chip, if it is hit hard enough. Diamonds are very tough, but remember that if a cutter can purposely cleave (split) a diamond by giving it a sharp blow in the right direction, you can achieve the same thing if you hit it hard enough accidentally. You are more likely to damage a diamond at the girdle or at a point. Diamonds with exceptionally thin places on their girdles are very vulnerable. To avoid damage, you should only wear your diamond jewellery during activities where you are unlikely to hit them hard against solid objects.