The U.S. stock market plunged about 7% in the two weeks leading up to the various Las Vegas shows, which ran from May 30 to June 3, injecting an air of caution into business. All told, jewellery designers and manufacturers of finished jewellery reported decent, if measured, demand, while loose diamond and gemstone dealers said business was down from last year.

Manufacturers said retailers came to buy but were cautious about placing large orders. “‘Let’s wait and see’ was the way a lot of discussions ended,” said one exhibitor in the JCK Plumb Club, an association of larger companies.

Continuing the trends of the past two years, jewellers have been incorporating more colored gems into their lines because they usually cost less than diamonds and often result in higher margins.

Judging by the jewellery designs on display at the shows, rainbows, tutti-frutti and various other wild, splashy color combinations were the major look across most price ranges. Designers favored multi-coloured tourmalines, fancy colored sapphires and various colored garnets at the middle and high ends, and dyed glass and quartz in the lower price points.

Coloured stone exhibitors at the American Gem Trade Association show, not surprisingly, found more calls for such material this year, especially at the lower end. 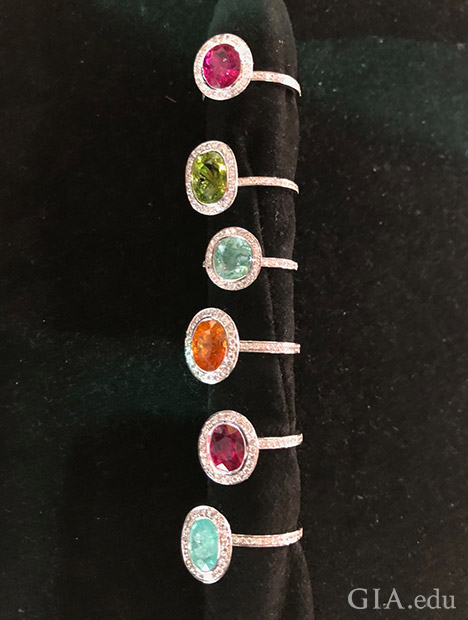 Multi-colour tourmaline pieces were popular, such as these rings by Caroline at AGTA. Photo by Russell Shor/GIA

Diamond dealers, blunted by economic and political uncertainty; excess inventories, especially in sub-caraters (retailers can have their choice of thousands of such stones from online sources); and banks tightening terms of memo deals, saw less traffic and slower buying at the JCK Show.

To boost demand for diamond jewellery this fall and next year, the Diamond Producers Association (DPA) will begin aggressively targeting women who buy pieces for themselves.

The $10 million campaign #ToMeFromMe will be directed at “older millennial women.”

The DPA noted that spending by women in self-purchased jewelry averaged $1300 last year and represented 32% of U.S. diamond jewellery sales.

Despite slow diamond demand at the show, there were a number of new diamond origin tracking services at the JCK Las Vegas show. In addition to the GIA Diamond Origin Report, De Beers and Alrosa introduced their own mine-to-market diamond tracking; the Cullinan Diamond Report debuted as an identification system to track high-value, previously mined diamonds; and Sarine offered a service charting a diamond’s progress through the cutting processes. 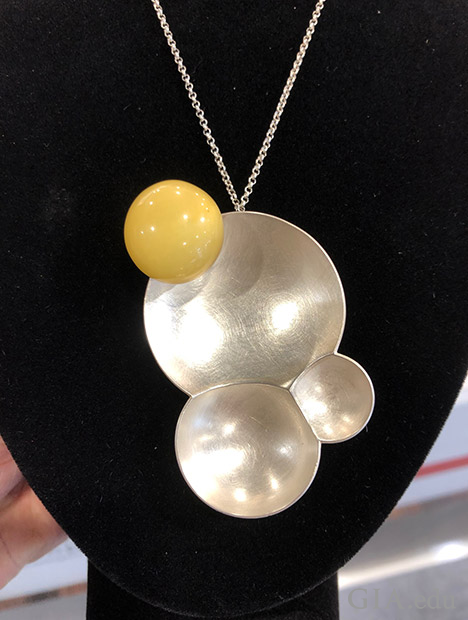 Designers looked increasingly to affordable gems to create a bold look, such as this approximately 20 mm Baltic Amber sphere mounted on to textured silver at the Polish pavilion at JCK. Photo by Russell Shor/GIA

Although calls for loose, natural diamonds were down this year, talk about laboratory-grown diamonds was even livelier than last year. About 50 companies selling lab-grown diamonds exhibited at the JCK Show, which was substantially up from last year, but prices were significantly lower. This led to intense speculation about where this market was heading.

Much of this talk was addressed at a seminar held by De Beers’ Lightbox, a line of laboratory-grown diamond jewellery the company debuted as last year’s Vegas show.

Emily Condo, brand strategy consultant for Lightbox, reported that a survey showed 44% of consumers still have not heard about laboratory-grown diamond brands and that 37% of consumers incorrectly labeled such diamonds as “simulants.”

She reported that the survey found that a majority of consumers were neutral or favorably inclined toward laboratory-grown diamonds because they offered them a choice, especially toward “lighter” occasions, such as non-romantic gifts and everyday wear. Consumers also expressed strong price resistance as prices rose: 78% said they would not spend more than $1,000 on a laboratory-grown diamond.

Lightbox, which sells its laboratory-grown diamonds for $800 per carat plus the cost of mountings, reported that after a year of selling online, 89% of those sales were for 0.5 total carat weight pieces and of those, 51% were colorless, 27% pink and 22% blue. 68% of purchasers were women buying for themselves, the majority of whom were in the 25-34-year age group.

The company noted that its production was set to reach 200,000 carats a year in the second quarter of 2020 after its factory in Oregon goes online. 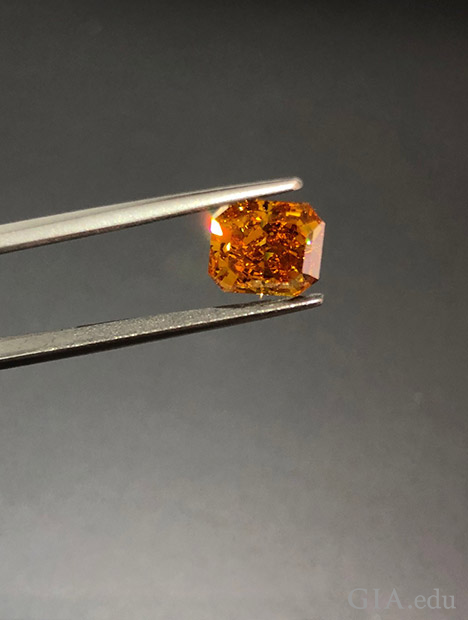 A 3.01 ct Fancy Vivid orange diamond offered at JCK Luxury. Demand at the high end was muted this year as retailers took a cautious approach. Photo by Russell Shor/GIA

How best to meet consumer’s requests to have the most information about where their jewellery comes from was the topic of two industry panel discussions during the shows.

Participants agreed that best business practices have to begin internally with employees and customers to ensure they are “ingrained into the company’s DNA” in order to have lasting success.

“People want to believe in a company that has values,” Corey said.

Ethically sourced products occupied much of the discussion, with van Veken stressing that it was a shared responsibility across the entire value chain.

One of the most difficult areas for the incorporation of sustainable sourcing practices is artisanal mining. Shah explained that such miners are the backbone of the coloured stone industry, “so they must be well taken care of.”

Zerouki added that, to empower artisanal diamond miners, De Beers developed Gem Fair, a program that gives them the best returns on their diamonds by bringing them all the way into the downstream market.

“Trust and transparency are the new equity,” van Veken stressed. “People want to have confidence that their purchases do some good.”

Exhibitors generally liked the changes, saying the new venues were much easier to navigate.