How do you “wow” people who have seen it all?

That was the question on McKenzie Santimer’s mind in 2014 as she began to think about how to transform a feature case at GIA’s New York campus into a display that would “engage, inspire and promote the gem and jewellery industry."

Santimer, GIA’s manager of exhibits and in-kind gifts, and Terri Ottaway, GIA museum curator, knew stopping students in their tracks would be no small order. The Institute’s New York campus is perched in the heart of the city’s Diamond District on 47th Street, near the high-end displays of Fifth Avenue.

Students walk by dazzling displays every day on their way to class.

On top of that, the GIA museum team is based at the Institute’s Carlsbad, California, world headquarters. Nearly all of the planning for this exhibition would take place 3,000 miles from its installation site.

A newly released time-lapse video by GIA shows how the pair meticulously constructed a display full of award-winning diamonds, huge rock crystal quartz, unusual carved gems and pieces of jewellery representing some of the most recognisable and influential eras of design.

“It’s a slice of Carlsbad on the East Coast,” Santimer says. “We brought things to New York that you otherwise couldn’t see there.” 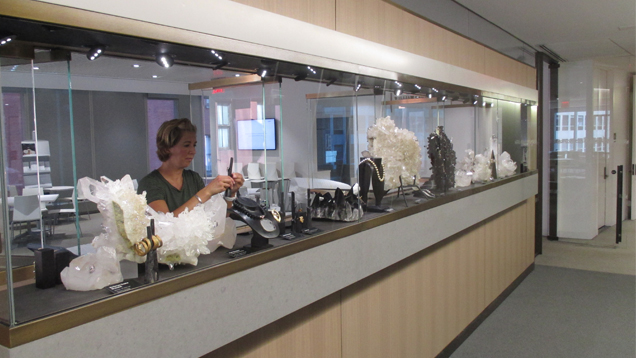 McKenzie Santimer, GIA’s manager of exhibits and in-kind gifts, says the ambient light in the student commons made it a challenge to “create drama” in the oversized, two-sided glass display case. Santimer is confident the exhibit will “wow Fifth Avenue walkers.” Photo by Terri Ottaway

While the team made two years’ worth of planning look effortless, their behind-the-scenes work was anything but.

“It’s not glamorous,” says Santimer, recounting the logistics and minutiae involved with any museum exhibition. There is the enormous task of object sourcing, as well as layouts and taping, label writing, and shipping and installation concerns. They also need to secure insurance policies that protect important pieces while they are en route and once they arrive at their destination.

In Carlsbad, Santimer and Ottaway have some access to support staff, and a rotunda that lends itself to thematic displays that can be constructed during regular work hours. In New York, however, extra staffing was limited and both ambient lighting and the double-sided glass feature case presented unusual design challenges. Nearly every aspect of the work would simply take more coordination.

On the other hand, the space at GIA in New York presented some exciting opportunities.

GIA occupies three floors of the two and a half-year old International Gem Tower. The eighth floor houses the education department and is accessible exclusively to the 150-plus New York students, staff and VIP visitors. There are several classrooms, a library, locker rooms and a student lounge, all with what Santimer describes as a “modern zen” aesthetic.

“It’s a special experience for students to be there, and is almost a sanctuary and juxtaposition of the loud, vibrant city that’s just outside,” she says.

Within that commons area is the feature display case: 20 feet long, 16 inches wide and 30 inches tall, the case is lined on one side by a corridor, and by chairs and a student lounge on the other. 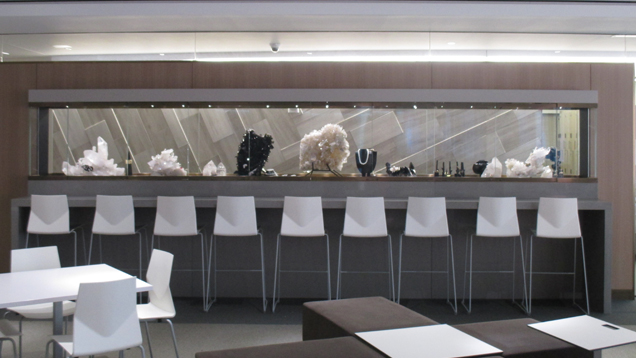 “Students can pull up at the bar, plug in their laptops and have a cup of coffee right in front of it,” says Santimer. “It’s beautiful, but because of the two visible sides, it is a real challenge for a curator and designer to make it pretty from both viewpoints. And because of the ambient lighting, it’s very challenging to create drama.”

The exhibit, the second in that space, would complement the already-installed 15 small, education-focused wall niche exhibits lining the hallways of the eighth floor.

Gemmological Treasures from the GIA Museum

Though there was no formal theme, Santimer and Ottaway decided to play to GIA’s strengths and zero in on gemmology.

The pair began by replacing the petrified wood and bamboo from the previous display and replacing it with a foundation of 783 carats of rock crystal and smoky quartz. They acquired the American-mined minerals – the largest of which weighs 75,000 grams and measures 12 x 9 x 7.5 inches – from the Ron Coleman Mining Company in Hot Springs, Arkansas in 2014 at the Tucson gem and mineral shows.

“The quartz was our canvas, and buying it was a great opportunity,” Santimer says. “There aren’t many minerals large enough to fill a display this big, and there aren’t a lot of them that are pretty on both sides. Quartz crystals grow large, and it’s a mineral that we knew everyone would recognise. Terri and I see possibilities everywhere, so when we came across these crystals in Tucson, we immediately thought, ‘This would work!’”

Next, Santimer and Ottaway decorated the quartz with a combination of 44 pieces, 29 of which are jewellery, objets d'art, and loose gemstones, from the GIA Collection.

“We had to ask ourselves what was going to pop and stand out against the quartz,” Santimer says. “So we broke it up into smaller vignettes and motifs, based on different periods, colours and themes.

We used 88 total carats of diamond jewellery and a smattering of art deco, contemporary and Victorian pieces, as well as unusual carved gems such as a star sapphire. There are DeBeers-award-winning pieces and organic pieces like a cow bone brooch.”

There is also avant-garde jewellery from Brazilian designers, South Sea pearl necklaces and snake bracelets – one made of Victorian-style jet beads, the other of 15K gold.

The quartz pieces, in addition to serving as a foundation for the entire display, represent the entire cycle of a quartz – from the rock crystals to a 202.80-gram sword-shaped letter opener and “The Cyclops”, an 8,783.50-ct flawless, colourless natural quartz gemstone with a round brilliant-cut pavilion and a step-cut crown. 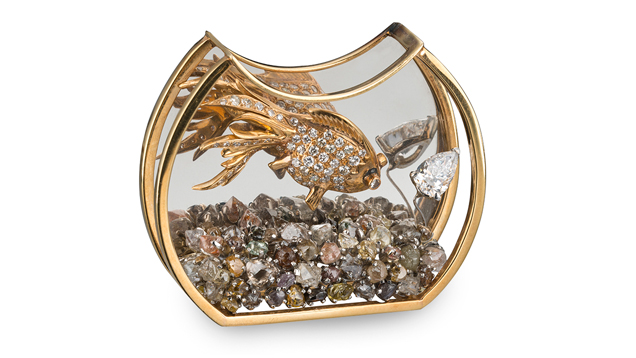 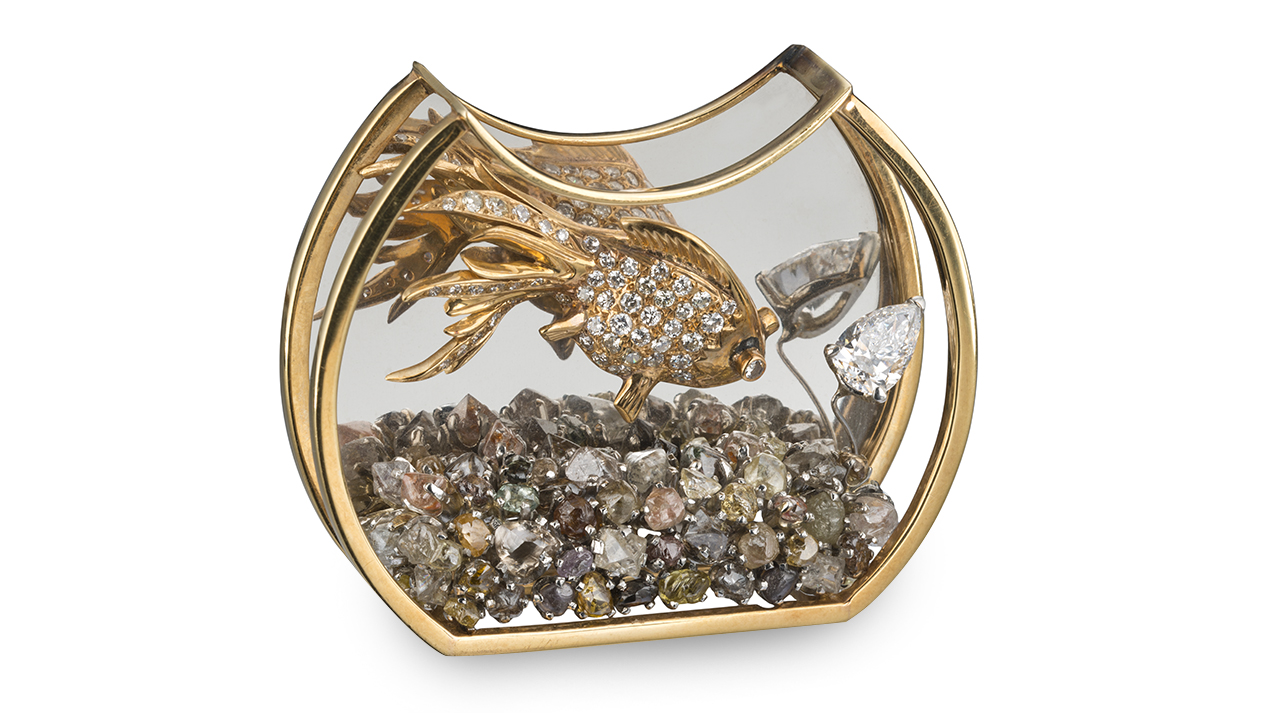 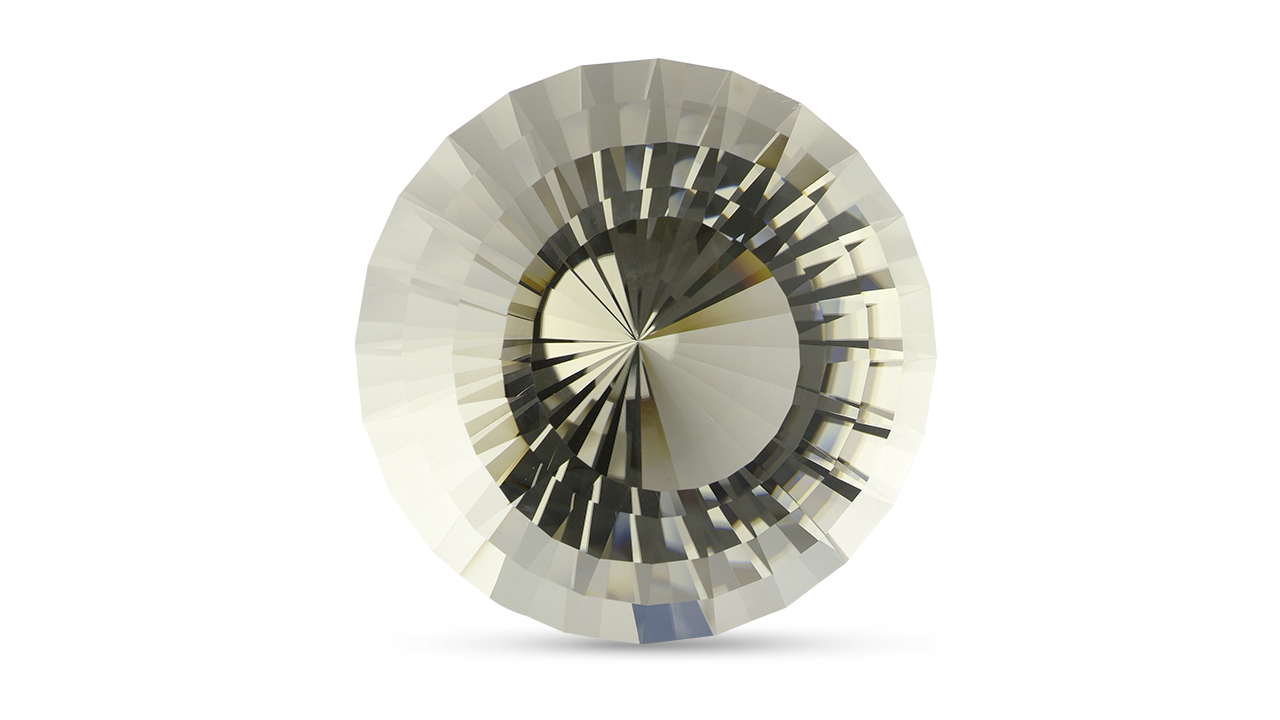 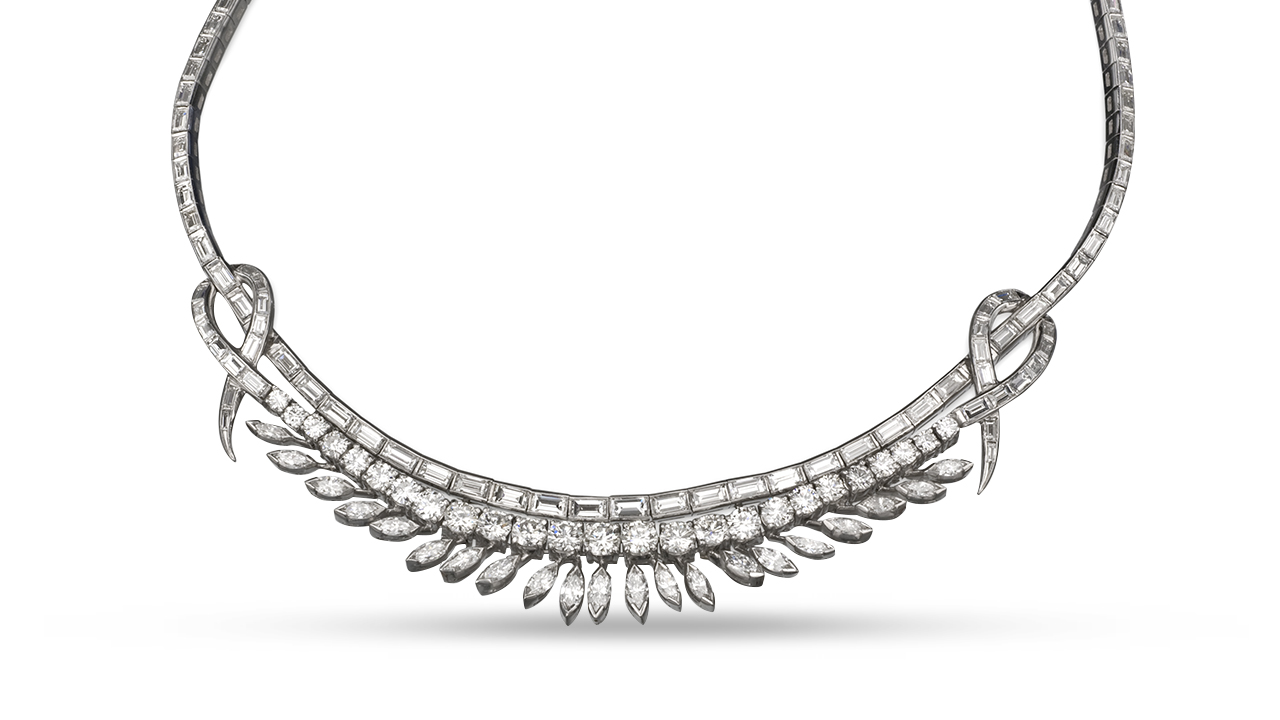 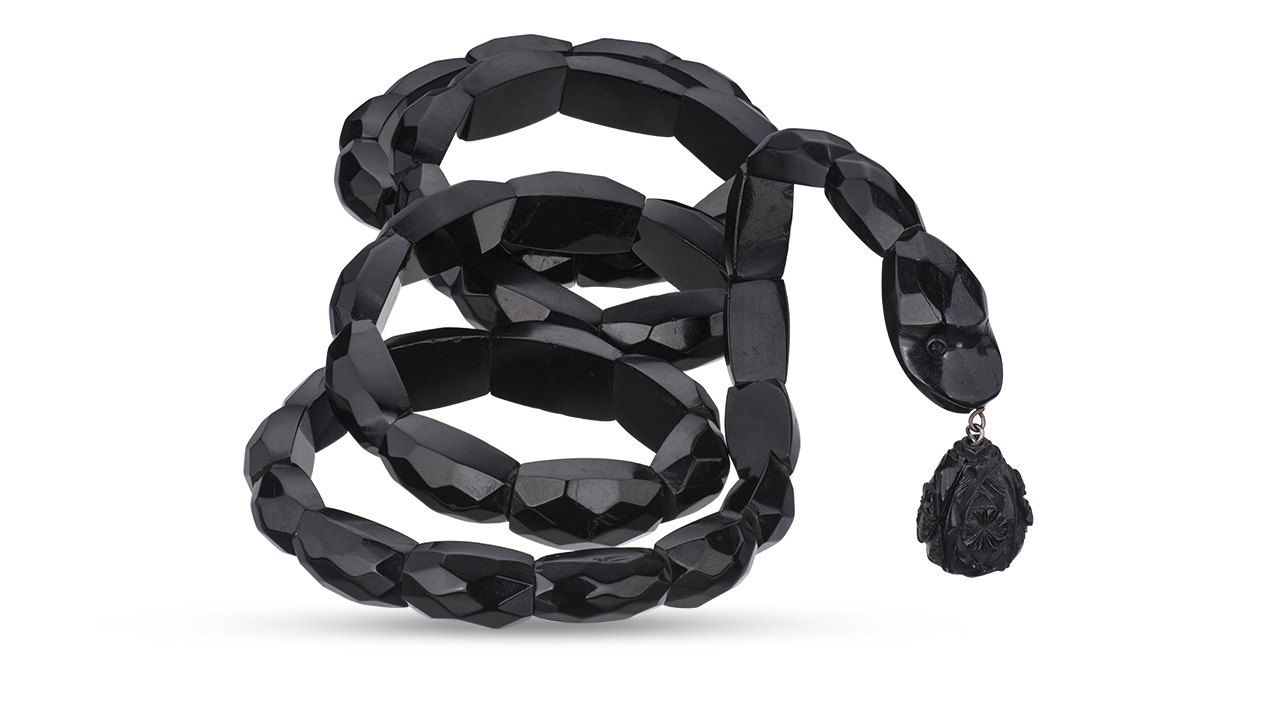 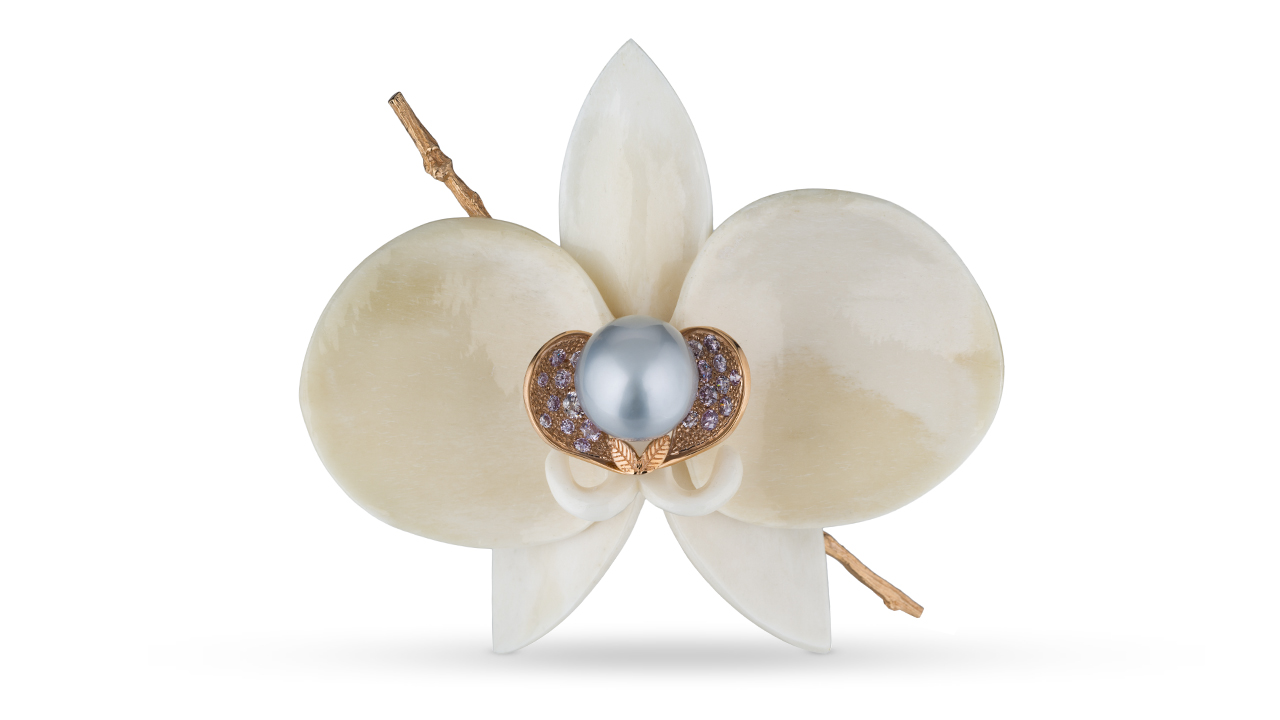 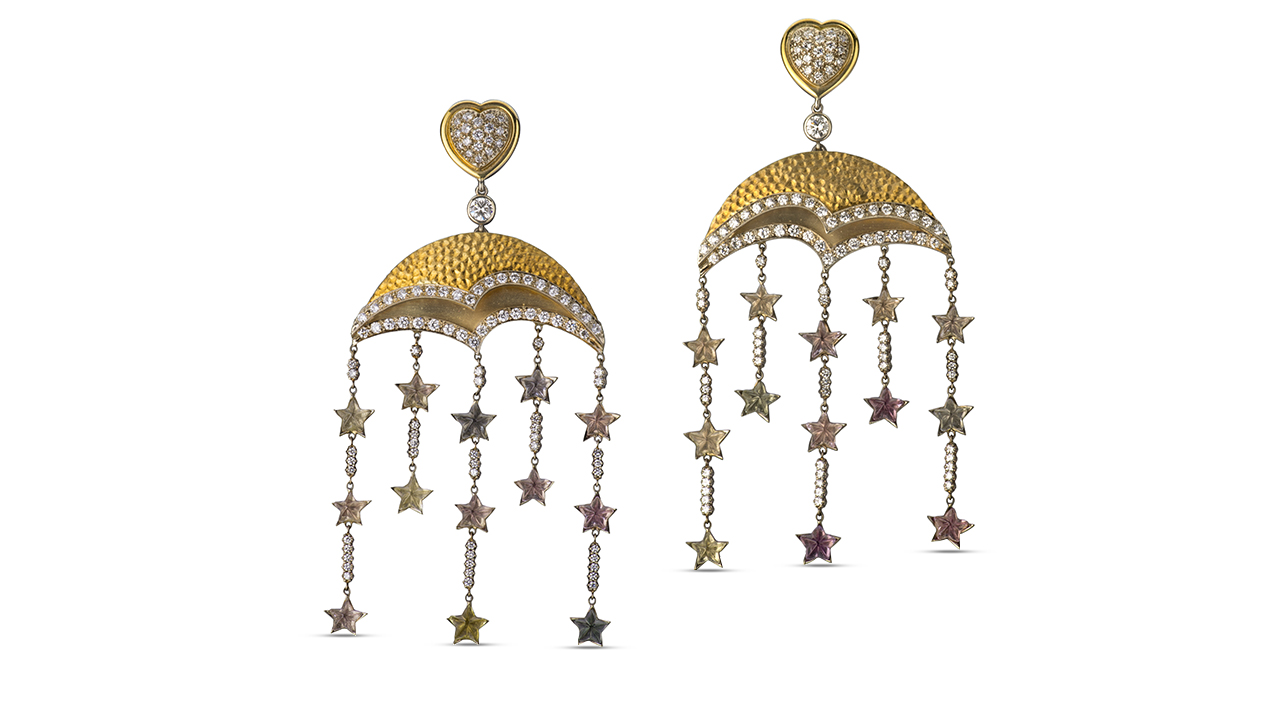 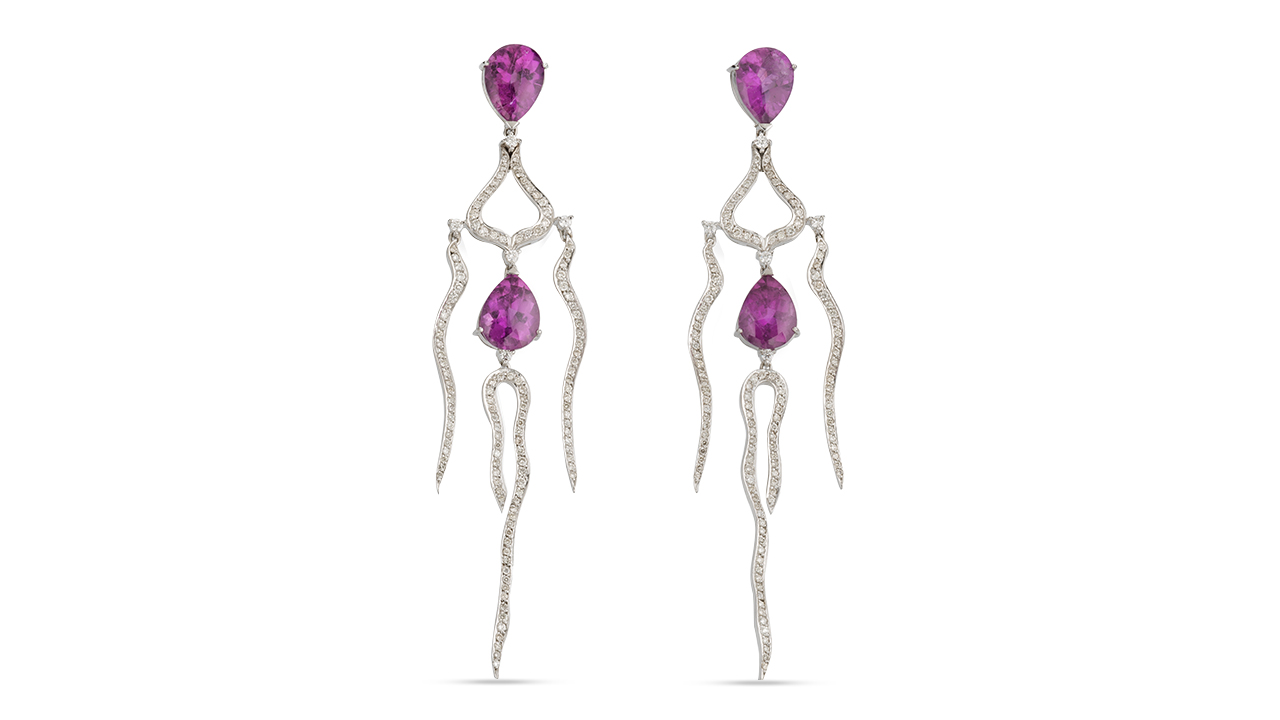 Since the commons area is in use during the week, Santimer and Ottaway had to work back-to-back weekends, and set up a staging area in an unused classroom. And since only one side of the feature case has doors, they had to creatively fit themselves into awkward spaces and narrow openings during the installation.

As the time-lapse video shows, the scope of their task was large, but resulted in a one-of-a-kind exhibition.

“We had very high expectations and are very proud of this display,” says Santimer, who is already thinking about how to “up the ante” when it comes down in two to three years. “We feel like this exhibition is perfectly at home in New York and are confident that we could ‘wow’ even Fifth Avenue walkers.”

Museum Exhibition: 25 Years of Design from the AJDC

A selection of more than 150 works of jewellery and objets d’art created by 40 AJDC designers.
Read More

Explore the wondrous world of diamonds featured in this book and museum exhibition.

Visitors to the GIA World Headquarters in Carlsbad, California can experience a vast and vibrant world of gems and jewellery. Exhibits showcase the science and beauty of gems and minerals, along with expertly designed and crafted jewellery.