“Adventure is in my blood,” says Robert Gessner, a GIA Graduate Gemologist (GG) and Cape Town-born geologist who is the owner of Gessner Gems, a sourcing and curatorship firm for coloured stones.

Gessner’s parents are of European descent – his maternal grandparents were Dutch diplomats who retired to South Africa, and his father’s family came from Germany before settling in Mozambique. When the Gessners married and started a family in South Africa, they never stopped exploring.

“I was fortunate growing up in a family that loved the outdoors and travel,” says Gessner, the eldest of four children. “By the age of 16, I’d travelled most of South Africa. We were always seeing something new, and it became etched on my soul. Now, there is no adventure to a new destination that I’d pass up easily. I love to meet new people, be exposed to their culture and see their country’s beauty.”

The family’s shared enthusiasm for exploration extended to the natural world.

“My earliest exposure to rocks and minerals was through monthly magazine supplements that my mum purchased from our local newsstand,” Gessner says. “They included a mineral and gemstone in a little display box, and as the months went by, the file of information about our earth, rocks and minerals – as well as the collection of specimens itself – grew into an impressive display. The beauty, variety and perfection of each gem had me hooked.”

Though his family had lived and travelled around South Africa, it wasn’t until he went to the University of Cape Town that Gessner says the world truly opened up for him. He graduated with a Bachelor’s degree in geology in 2002, and said the discipline gave him “direction, a goal and access to a professional career”.

A self-described “eternal optimist”, Gessner submitted his almost-empty CV to a local recruiting agency. Within weeks, he was contacted about a position as a geologist in Tanzania and accepted straight away.

“It turned out to be the early years of the company that became Tanzanite One, the biggest, most technological coloured gemstone miner and supplier of tanzanite to the world,” he says.

“My favorite thing about my career has been seeing the beauty of the finest gemstones and specimens and hearing stories from the owners who display them,” says Robert Gessner, inspecting a piece of tanzanite rough. He recently joined William Noble Rare Jewels as a colored gemstone specialist, and owns Gessner Gems, which specializes in sourcing and curating colored gemstones. Photo by Brendan Laurs/GIA

Some of Gessner’s new colleagues were earning their Graduate Gemologist diplomas through GIA’s Distance Education programme, and he was intrigued. “It was the first time I’d heard of GIA,” he says. “I wanted to get involved.” He earned his Accredited Jewelry Professional diploma in 2008.

“After 13 years of coloured gemstone mining and exploration in East Africa, I was looking for my next opportunity,” he says.

Gessner started with a trip to the United States – his first ever – in 2015 for the Tucson gem and mineral shows. As a GIA alumnus, he knew about the Alumni Association’s annual dance party, and he knew he would have a chance to network and discover new paths within the industry.

“It was life-changing,” he says. “It was a 10-year reunion for me, meeting with all the field gemmologists, scientists, writers and editors and professionals from our industry whom I had hosted, met and got to know in the mines.”

As a specialist in African coloured stones, such as tanzanite, tsavorite and Zambian emeralds, investigating gemstones from South-East Asia and South America also piqued his interest.

“Seeing all the gemstones and minerals from around the world lit a spark to learn all about them,” he says. “For continued career growth, studying at GIA was a no-brainer.” 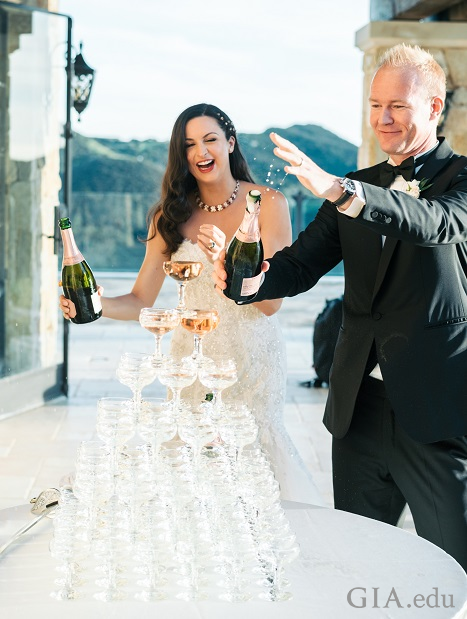 But the life-changing moments in Tucson didn’t stop with professional and academic changes. He met a Southern California jewellery designer named Melissa Spencer at the alumni dance party and after just a few dances, Gessner – who was being groomed for a position as general manager of Gemfields – knew he would not be returning to Africa.

“When you know, you know,” he says. “There was an immediate connection, like the stars and galaxies aligned. We have been inseparable since then. Our meeting at the GIA Alumni Association party was meant to be and changed our lives.”

Gessner returned to Zambia the next week and resigned from Gemfields. He also enrolled in GIA’s Graduate Gemologist programme in residence at Carlsbad – much closer to Spencer, a GIA GG who was living in Los Angeles. Gessner graduated from GIA in March 2016, and married Spencer in March 2017.

“I enjoyed every single moment, particularly while in residence,” he says. “GIA’s practical and theoretical education platform and resources, including the staff and library, are world-class. The lab classes and practical work are vital and, supplemented by the literature and theory, they lay the foundation for a career. The relationships and friendships that I made there – and continue to make through GIA – helped equip me for success.”

Gessner Gems has just turned two years old and Gessner is thrilled to connect clients with fine coloured gemstones from around the world.

“I share knowledge about gems with each client – its source, if known, what makes it different from other sources, if and why the gem is treated, and the romance of its geological origins in describing its rarity,” he says.

In addition to his own business, Gessner has recently accepted a position as a coloured gemstone specialist with William Noble Rare Jewels in Dallas, Texas. He has also begun writing for trade publications, including GemGuide and AGTA’s Prism magazine.

In the same way that geology – and eventually, gemmology – opened doors to learning and adventure around the globe, Gessner hopes that sharing his knowledge will open doors for others.

A Visit to the Kagem Open-pit Emerald Mine in Zambia

Join GIA on location at the Kagem emerald mine in Zambia to get an overview of what may be the largest emerald mine in the world. It’s an operation that is helping to revolutionise the coloured gemstone industry.