A report on Colombia’s unique trapiche emeralds is the cover feature of the autumn 2015 issue of Gems & Gemology (G&G), which also offers an analysis of large synthetic diamonds produced in Russia and a detailed look inside the Letšeng Diamond Mine in Lesotho (the leading source for mega-sized diamonds).

Colombia’s trapiche emeralds show a distinct pattern that resembles a wheel with six spokes. They are found only in the black shales of the country’s western emerald zone near the legendary mines of Muzo, Quiopama and Coscuez. 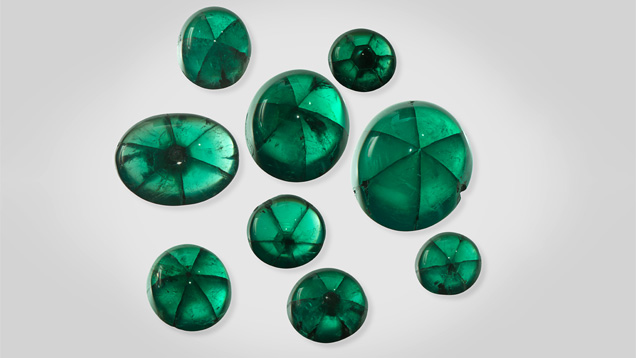 These trapiche emeralds, all from Peñas Blancas, range from 5.09 to 22.74 carats. Photo by Robert Weldon/GIA. Courtesy of Jose Guillermo Ortiz, Colombian Emerald Co.

The researchers, Dr Isabella Pignatelli, Gaston Giuliani, Daniel Ohnenstetter, Giovanna Agrosì, Sandrine Mathieu, Christophe Morlot and Yannick Branquet, performed spectroscopic and chemical analyses on the samples to determine how they formed within their geological setting. They determined that super-pressurised fluid within the black shale helped grow the emerald seed crystals and provided a unique growth environment for them to form into trapiches.

In the past five years, the vast majority of synthetic diamonds appearing in the gem market have been manufactured by the Chemical Vapour Deposition (CVD) process, which has been viewed as more efficient than the older High Pressure, High Temperature (HPHT) method, especially for colourless stones.

A Russian manufacturer, New Diamond Technologies, however, has introduced a line of large HPHT-grown colourless synthetics and offered 44 samples to GIA for analysis. 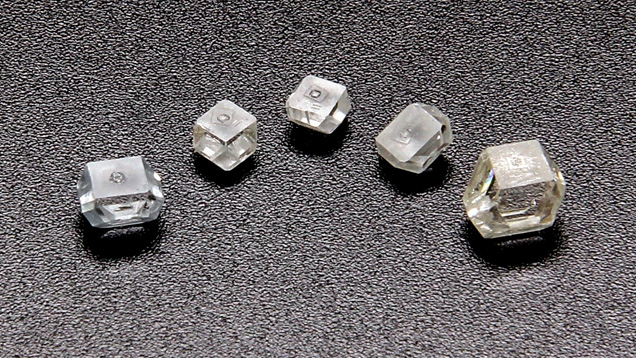 GIA researchers Ulrika F.S. D’Haenens-Johansson, Andrey Katrusha, Kyaw Soe Moe, Paul Johnson and Wuyi Wang analysed the samples using a combination of spectroscopic and gemmological techniques to characterise the quality of the material and determine the means of distinguishing them from natural, treated and alternative laboratory-grown diamonds.

These samples had weights ranging from 0.20 to 5.11 carats, colour grades from D to K, and clarity grades from IF to I2. Importantly, 89% were classified as colourless (D-F), demonstrating that HPHT growth methods can be used to routinely achieve these colour grades.

The Letšeng-la-Terae diamond mine in Lesotho is the world’s most consistent source of type IIa diamonds (those with exceptionally low nitrogen content), which account for about one-quarter of its production. The mine claims six of the 20 largest diamonds ever discovered: 478, 493, 527, 550, 601 and 603 carats. The largest of these, the Lesotho Promise, was found in 2006 and sold to London jeweller Laurence Graff for $12.4 million.

This remote village, deep in the Maloti Mountains near the Letšeng mine, is primarily dedicated to agriculture and sheep herding. Villagers also form the workforce for the diamond mine. Basuto ponies, such as the one seen here, are esteemed for their speed and surefootedness in the steep, rocky mountain passes. Photo by Robert Weldon/GIA.

The report by Russell Shor, Robert Weldon, A.J.A. (Bram) Janse, Christopher M. Breeding and Steven B. Shirey, also notes that Letšeng’s diamonds are unusual in that a majority are dodecahedral in form, which are very rare in other sources. Despite its bounty, Letšeng has had a difficult history because its ore grade is extremely low – about 2 carats per 100 tonnes – and was not economic to run until recovery technology and diamond prices improved to allow profitable operation. 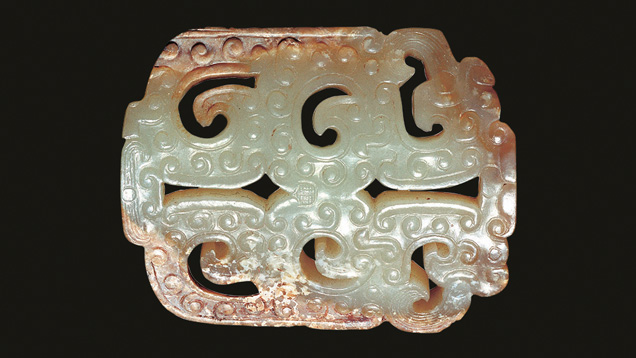 This ancient pendant was discovered in the tomb of Marquis Yi, ruler of Zeng State during the Warring States period (ca. 475–221 BC). © Hubei Provincial Museum.

The authors used a new statistical analysis method based on linear discriminant analysis (LDA) and trace-element data from laser ablation−inductively coupled plasma–mass spectrometry (LA-ICP-MS), to achieve significantly improved origin determination (an average of 94.4% accuracy) for these nephrite samples. This technique could be applied to other gemstones to determine their geographic origins.

This section of G&G features a discussion on unusual graining structure in a very light pink diamond with a uniform colour plane intersecting with a cone of strain that fits perfectly into a colourless hole; an HPHT-treated yellow diamond whose treatment was discovered by spectroscopic analysis; and an emerald with strong colour zoning along the pavilion facets that demonstrates the importance of proper orientation and cutting. Other lab notes include a look at irradiated green-blue CVD synthetic diamonds that are the product of new growth technology; a natural green jadeite carving with areas that had been dyed green; and an examination of three large, natural abalone pearls. 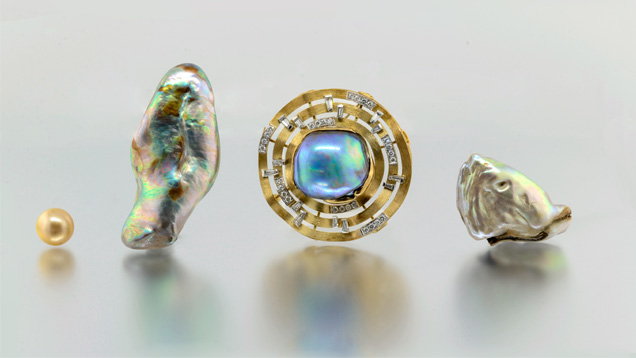 The Micro World section shows a Fancy Intense purplish pink diamond with an intricate geometric pattern of planar cracks and strain-induced bodycolour; an otherwise colourless rough diamond that has an eye-visible bluish-green stain near the surface caused by radiation; blue octahedral crystal inclusions within heliodor cabochons that are determined to be gahnite, a rare zinc-rich member of the spinel group; and a trapiche pezzottaite reportedly found near the Thai-Myanmar border. 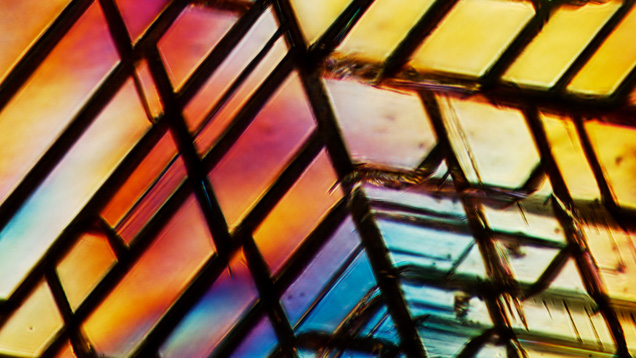 Between crossed polars the diamond shows high-order interference colours consistent with the strain causing the cleavage network along the octahedral planes. Photomicrograph by Jonathan Muyal; field of view 0.62 mm.

Other features in this section include glassy melt inclusions in alluvial Montana sapphires, molybdenite inclusions in colourless topaz, and a lighting technique from gemmological microscopy, Modified Rheinberg Illumination, that provides false-colour contrast to enhance inclusion scenes.

GIA pursues a wide range of scientific investigations to gather and analyse data on gemstones.

Diamonds Under the Scope

Peer through a microscope and discover another world of gems. Inclusions reveal the gem’s journey from deep within the earth to its surface.

Circumnavigate the boreal reaches of the globe from Greenland, proceeding in an easterly direction to Canada to explore polar gems.