After announcing that it would reduce rough diamond allocations for the near future, De Beers abruptly shifted course. Its April cycle sale, which totalled $575 million (£443 million), was about 15% higher than the previous cycle in February. At the same time, Russia’s Alrosa announced that its sales were down by 37% during the first quarter compared to last year.

Before De Beers’ 1-5 April sale, the company informed clients that it would limit allocations because of the closure of its Victor mine in Canada and reduced production from the Venetia mine in South Africa, which is undergoing the transition from an open pit to an underground operation.

While these changes have affected production, the entire diamond industry is struggling with high stock levels of both rough and polished, especially smaller, lower quality goods destined for mass market jewellery. Consumer demand has been insufficient to reduce these levels. Diamond manufacturers, faced with ever tightening credit, have said they would welcome lower supplies of some goods. The well-publicised bankruptcy in Antwerp of one of the world’s largest diamond companies, with about $2.5 billion (£1.9 billion) yearly revenue, has not helped.

De Beers is faced with pressures to ramp up sales, however, and is beginning talks with the Botswana government, which owns 15% of De Beers, for a new five-year renewal of the contract that forms the basis of their 50-50 mining and marketing operation, Debswana. Debswana operates, among others, the Jwaneng and Orapa mines, two of De Beers’ largest diamond sources. In past contract talks, Botswana has proved to be a tough negotiator and has won considerable concessions, including the establishment of a substantial local diamond manufacturing base and the move of De Beers’ headquarters to the capital, Gaborone.

De Beers has also been under a great deal of pressure from clients and others to allow the identification of the diamonds produced at its mines. In the past, it has been reluctant because many of its clients also buy from Alrosa, Rio Tinto and other producers and mix all of the rough in their cutting operations. It has made a u-turn, however, and is allowing its clients and their customers to identify specific diamonds as Diamond Trading Co (DTC)-sourced, all the way to the consumer level. De Beers still does not disclose a specific country of origin, arguing that all of its diamonds are produced according to its best-practice principles and sustainable mining efforts. The company still will not allow clients to use the De Beers name, which is reserved for its retail operations, and imposes certain conditions on how the DTC name is to be used.

On 28 March, GIA announced the GIA Diamond Origin Report service, which uses scientific evaluation to confirm diamond’s geographical origin. The reports will be available from 30 April.

The US Federal Trade Commission (FTC) has issued warning letters to eight producers for failing to conspicuously note that their diamonds were not natural. Lost in the fine print was an additional warning against claiming that such diamonds were more beneficial to the environment – a central part of the competitive strategy of laboratory-grown diamond producers, vis-a-vis natural stones.

The US FTC statement:

“Some companies described their products as ‘eco-friendly’, ‘eco-conscious’, ‘sustainable’, etc. Marketers must have a reasonable basis for any environmental claim they make. Furthermore, according to the FTC’s Green Guides, companies should steer clear of general environmental benefit claims because it’s unlikely advertisers can substantiate all reasonable interpretations of those claims.”

In the five or so years since laboratory-grown diamonds have been widely available, “eco-friendly” and “conflict free” have been major selling points for their producers. This taps in strongly to the millennial audience that these producers see as their target consumers.

JCK reported that the companies notified by the US FTC have made changes in their online promotions to make it clearer that their products are man-made.

The cutting of the 1,109 ct Lesedi La Rona diamond is complete, with the signature stone being a 302.37 ct cut-corner square. The rough diamond is the second largest gem quality stone ever found, the largest being the 3106 ct Cullinan found in 1905. The 302.37 ct Graff Lesedi La Rona is the sixth largest polished diamond – and the third largest colourless – in the world behind the 545.67 ct Golden Jubilee yellow diamond; two colourless diamonds from the Cullinan (520 and 317 cts); the 407 ct Fancy Deep brownish yellow Incomparable; and the 312 ct black Spirit of de Grisogono.

London jeweller Laurence Graff, who purchased the rough diamond in 2017 for $53 million (£41 million), said it took 18 months to cut. Several months ago, Graff revealed 66 smaller satellite diamonds, ranging from under one to 26 cts, made from the stone, while diamond cutters tackled the challenge of getting a signature polished diamond of over 300 cts from the remainder. The diamond proved too large for conventional scanners and laser units, forcing the cutting firm to adapt its equipment to accommodate the stone.

Graff did not reveal the total weight of the diamonds polished from the rough crystal, but those who handled the rough have described several inclusions and an internal fissure that potentially lowered the yield.

The Lesedi la Rona was found in November 2015 by Lucara Diamond Co. at its Lerowe Mine in Botswana. Its name translates to “Our Light” from the Tswana language. 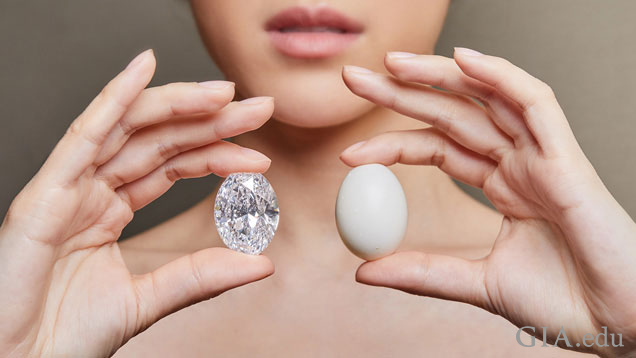 The buyer was a Japanese executive who named the diamond Manami Star, after his daughter. The auction house noted that the diamond was cut from a 242 ct rough found in De Beers’ Jwaneng Mine, Botswana.

In New York on 16 April, Christie’s sold a pair of Fancy Vivid blue diamond earrings, 3.06 cts and 2.61 cts respectively, to an undisclosed bidder for $6.7 million (£5.2 million), about 10% above its top estimate. While the pair of diamonds achieved a higher-than-expected price, the per carat price of $1.2 million (£925,000) was well below what similarly graded diamonds have sold for in the recent past.

The sale was 88% sold by value, but did not feature potential record-breaking diamonds or coloured stones, which reflects some caution at the ultra-high end of the spectrum in today’s auction market.

All eyes are on Las Vegas as the jewellery business slows down in other parts of the world.

Diamond Quality: A Short History of the 4Cs

You’ve heard about the 4Cs of diamond quality (colour, clarity, cut and carat weight). But how did they become so well-known? Here’s a little diamond history.