The Curious Life of Patrick O’Shea: From Ballistics Detective to Gemmologist and Jewellery Designer

He was a ballistics detective for 19 years with the New York City Police Department, who played a part in 10,000-plus felony/homicide investigations. A long-standing member of the Free and Accepted Masons. A student of history and esoteric symbols, who also had an informal partnership with an expert in symbols who plied his knowledge to crack seemingly unsolvable crimes.

O’Shea’s unusual journey continued with a GIA Graduate Gemologist® diploma and a career that evolved into designing custom-made jewellery for the Masons that showcases the group’s sacred symbols.

“We live in a universe surrounded by a language far more eloquent than words. I use signs and symbols – the language of this alphabet – to represent the glorious mystery surrounding us,” O’Shea said of the imagery that informs his jewellery designs.

But before our story can go further, we must revisit O’Shea’s past.

Born in the Bronx, O’Shea spent nearly two decades on the police force as a ballistics detective on the mean streets of 1980s South Bronx. Days were spent going from one homicide scene to the next. When his fellow detectives were perplexed by evidence at a crime scene, O’Shea and Dr Marcos Coronas, a New York City police detective and professor of comparative religions, cults and symbology, would examine it, looking for clues like tattoos, drawings, a ring, books – anything that might shed light on the reason for the crime.

“Sometimes Coronas would say, ‘That’s nothing. It’s a symbol for protection against bad luck. Other times he would say, ‘This is a clear message that the murder was an act of revenge.’ Or, ‘These guys are up to something really bad,’” O’Shea said. 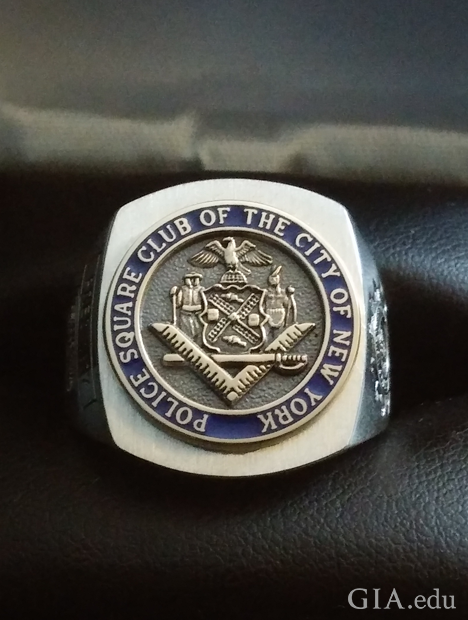 O’Shea’s ring for members of the New York City Police Department Club who are Masons displays many meaningful icons, such as the American eagle presiding over the imagery, which stands for patriotism. The windmill refers to the Dutch origins of New York and the Indian and pilgrim stand for the inhabitants of early New York. The truncheon represents equality and the angle of its placement means “The job isn’t finished”. Individuals who want to wear the ring must be active or retired New York City police department officers and Master Masons. Courtesy of Patrick O'Shea
#TEXT#

O’Shea’s last years on the force were spent as an expert ballistic wounds witness for the court. After his retirement, he became a bodyguard for New York’s wealthy.

“When the Great Recession of 2008 hit, all my clients started handing me their jewellery for safekeeping,” he said. “They figured if they trusted me to protect their lives, I could also protect their valuables.”

O’Shea already had an interest in gems and jewellery – he used to sell silver jewellery on the side when he was a detective – and his new work inspired him to study with GIA. He was a long way into his coursework in 2015 when his wife was diagnosed with cancer, so he put his studies aside to care for her. By the time he could resume it, he had exceeded the allotted completion time and had to start all over again. He finally passed his 20-stone exam after several attempts at GIA in Carlsbad.

“The classes at GIA in Carlsbad were astounding,” O’Shea said. The opportunity to handle gems and study them under the helpful eye of an instructor made it possible for him to turn theory into skill. He also noted that his work as a ballistics detective, which involved viewing bullets in a variety of lighting environments, prepared him well for gem identification.

The gemmological adventure resumed. But his first attempts to break into the industry were unsuccessful.

“I was an Irish-looking cop and I’m trying to talk to nice Hasidic men who wouldn’t acknowledge my presence,” he said. “Then I went to the GIA Alumni Association.”

An older gentleman, Rabbi David Altman, was speaking at the meeting. O’Shea had a detective’s hunch that Altman was a Freemason. His intuition was correct and the two became friends. Altman’s family had been in the gem trade for generations and began to introduce O’Shea to his business associates in the Diamond District.

“All of the sudden, I could do business on 47th Street,” O’Shea said.

Good fortune struck again when O’Shea was walking through the Diamond District wearing a ring he had made that was stamped with Masonic symbols. A passerby – Jilber Ezgilioglu, also a Mason – immediately, recognised them and the two began chatting. Several conversations later, they became creative partners: O’Shea a gemmologist and Ezgilioglu a master craftsman in old-world jewellery manufacturing techniques. 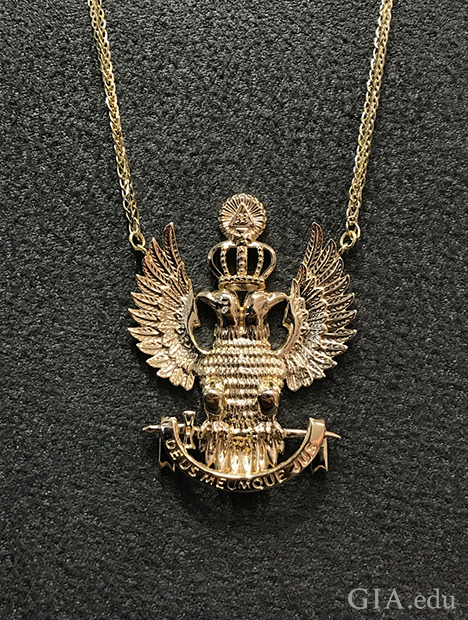 This piece (approx. 35 millimetres by 30 millimetres), created to celebrate the 300th anniversary of the founding of Free Masonry in England, jumpstarted O’Shea’s career as a designer. It is rich in symbolism: the double-headed eagle is an ancient symbol for the nobility of rule, with one head standing for wisdom in temporal affairs and the other for spiritual wisdom. The Latin words engraved on the banner can be translated as “God and my moral rightness”. The sword represents justice; the triangle represents geometry; and the sun represents the light of the Deity. Courtesy of Patrick O’Shea

O’Shea founded Happy Diamond Guy Masonic Rings in 2014 and began to design jewellery earnestly. Then a big break came. The Sovereign Grand Commander of the Northern Jurisdiction of Scottish Rite Masonry asked to O’Shea to make a pendant for his wife to wear to the celebration of the 300th anniversary of the founding of Free Masonry in England. He designed a double-headed eagle with spread wings – a dramatic creation that turned heads.

“People loved the piece and posted pictures of it on social media. All of the sudden, I started getting calls from Masons around the world – Japan, New Zealand, Canada – asking if I could make pieces for them,” O’Shea said.

And so a successful business was born.

O’Shea gets a steady stream of requests from fellow Masons to make custom Masonic rings, and bracelets and earrings for their partners. All of O’Shea’s work is custom, but he and Ezgilioglu are considering creating a line of less elaborate, more affordable Masonic jewellery.

As part of their business, O’Shea and Ezgilioglu (and occasionally Altman) visit jewellery stores that are selling coloured stones in bulk. Jewellers who specialise in diamonds – even in the Diamond District – often know little about coloured gemstones, according to O’Shea. Thanks to his GIA education, which he describes as “overwhelmingly informative”, O’Shea is able to sort through the thousands of carats worth of gems placed on a table, separating the beautiful stones they want to buy from the inferior ones and simulants.

O’Shea has earned such a reputation for his expertise that diamond dealers frequently contact him to evaluate pouches of coloured stones they have in their offices. Other shop-owners get O’Shea to visit their premises to evaluate gems they have come across on their travels.

If O’Shea ever needs assistance in an area outside his expertise, he turns to his address book, which is filled with GIA business cards.

“One thing GIA taught me was how to separate a great stone from a good stone, from a poor stone. You can’t just figure this out; you’ll just be guessing. You need an education for this, and GIA is the place to get it,” O’Shea said. 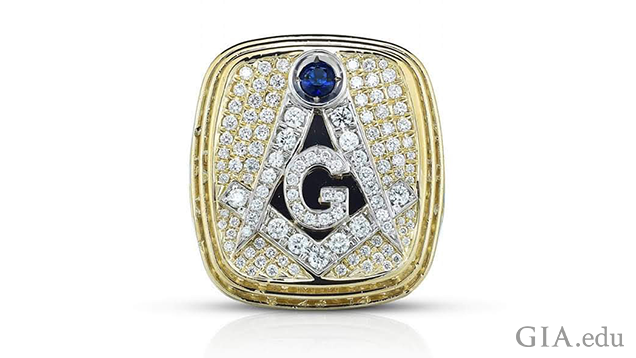 In one of O’Shea’s rings for the Masons, the “G” stands for the Great Architect of the Universe and geometry – the “noblest of sciences” – among other things. The compass, with a 0.10 ct sapphire centre, stands for discernment and wise conduct. The ring is 14K yellow gold with 2+ ct diamonds and a 14K white gold compass. Courtesy of Patrick O'Shea

O’Shea remains deeply loyal to his Masonic roots and its philanthropic activities. The Masons in New Jersey, his current state of residence, adopted dyslexia as its cause and provide free schools and a free training programme for school teachers. O’Shea’s chapter has gone further, raising enough money to donate a building for the children.

And O’Shea’s design business continues to grow. He notes that all his work is built for the ages, made with superior workmanship and materials so that pieces can be passed down from father to son.

“I consider myself extremely lucky. I’m the go-to guy for Masons in Northern New Jersey,” he said. “I’m also making jewellery for the upper echelons of the Masons. It’s a beautiful thing.”

While Dan Brown continues to write best-selling novels with riddles spun around symbols, O’Shea is turning the symbols of Masonry into Masonic jewellery. The gemmological adventure continues.

Members of the American Jewelry Design Council (AJDC) shared advice with GIA students when they visited the Carlsbad campus.

Learn the essentials for becoming a jewellery designer and technology professional.