Clothes, handbags, shoes and accessories that sport multiple solid colours, usually in bold and bright shades called colourblocking, have reappeared on the fashion scene in a big way in the last few years, but the trend is not new. It first appeared in Yves Saint Laurent’s 1965 collection, which was inspired by the artistic styles of modern Dutch artist Piet Mondrian, whose paintings were a collection of geometrical and colourful shapes. This 1960s mod fashion may be passé, but just as trends in fashion often return and thrive again, colourblocking feels new.

In the gem world, this style is found in the artistic combinations of colour in multicoloured gemstones appreciated for their colour zoning or banding. Colour banding in gems occurs in shapes or distinct layering. Agate, for instance, often forms in geometric shapes, while tourmaline and fluorite form in bold lines and stripes. 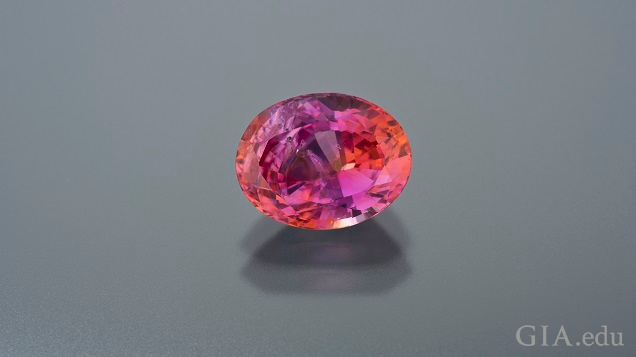 Agate and quartz crystallise in zones when chemical or physical conditions change during their formation. When iron is present during the formation of quartz, it can produce citrine, amethyst or ametrine. As the name suggests, this gem is a combination created by colour blocks of amethyst and citrine. Depending on how the colour zones are oriented during cutting, the two blocks of colour (yellow and purple) can be emphasised.

Alternatively, these colours can be merged through cutting to produce rich, purple hues of amethyst with honey-colour citrine. The result is a striking gem that evokes romantic Bolivian sunsets. The Anahí mine in eastern Bolivia is the only commercial source of ametrine, one of the most exotic multicoloured gemstones. Bolivia claims it as its national gemstone. 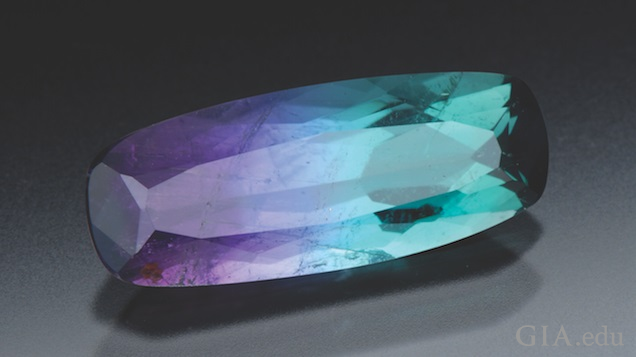 Copper is the trace mineral that produces the turquoise color in this tourmaline, colorblocking the complimentary colors. Courtesy of Mayer and Watt, Maysville, Kentucky. Photo by Robert Weldon/GIA

Tourmaline, more than any other gemstone, is found in every hue and it often has two or more colours visible in a single specimen. The chemical variations during tourmaline’s crystallisation determine its colour. Multicoloured tourmaline can form in zones resembling blocks of colour as in bicolour tourmaline – in a great number of colour combinations. Black or brown tourmalines get their colour from iron. Brown to yellow tourmalines are coloured by magnesium. Lithium produces tourmalines that are blue, green, red, yellow or pink.

Tourmaline derives its name from the words “tura mali" loosely translated to "stone of mixed colours" in the Sinhalese language of Sri Lanka. Ancient Egyptian legend tells us that tourmaline passed over a rainbow on its long journey from the centre of the earth and took on the spectral colours.

Liddicoatite is a calcium-rich lithium tourmaline named in honour of Richard T. Liddicoat in recognition of his more than 60 years of service to the gem and jewellery industry. Beautiful zones and bands in liddicoatite form in bold colourful patterns due to the changing mix of elements. Colourful slices of liddicoatite are often concentric bands of pink to red, green, blue and light brown. 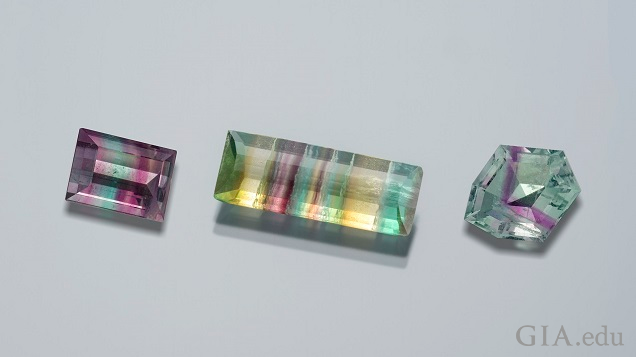 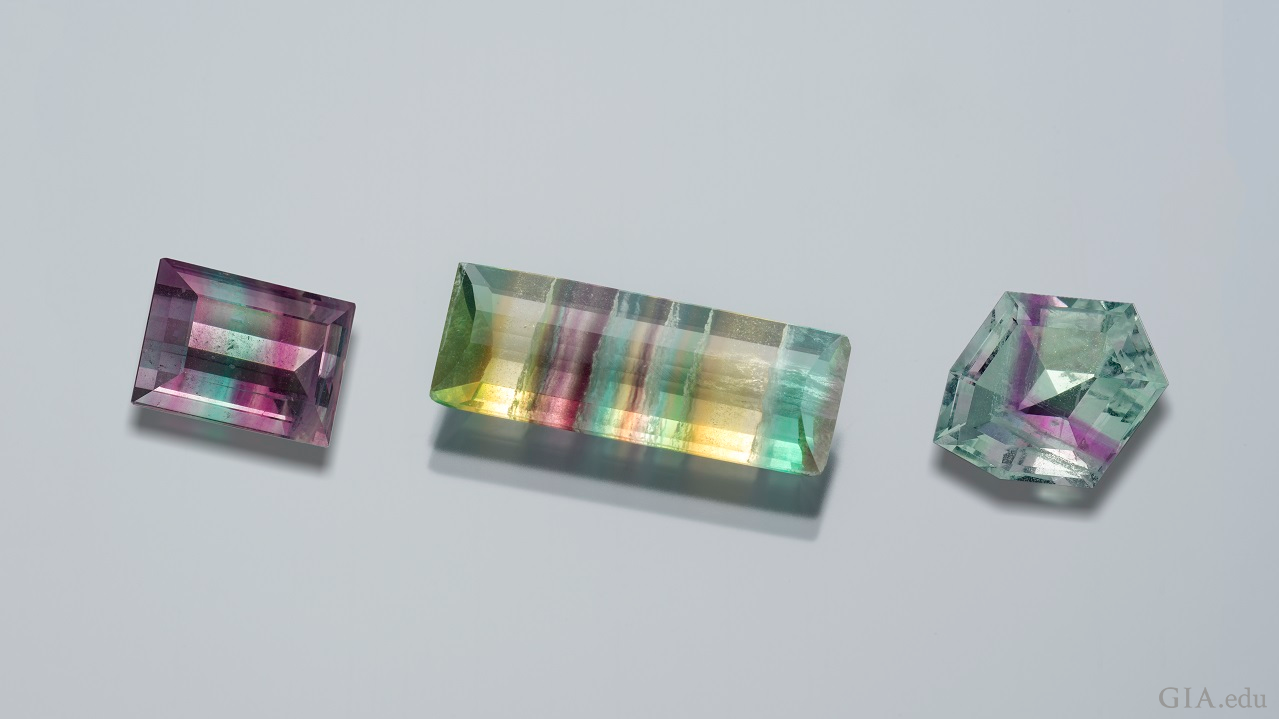 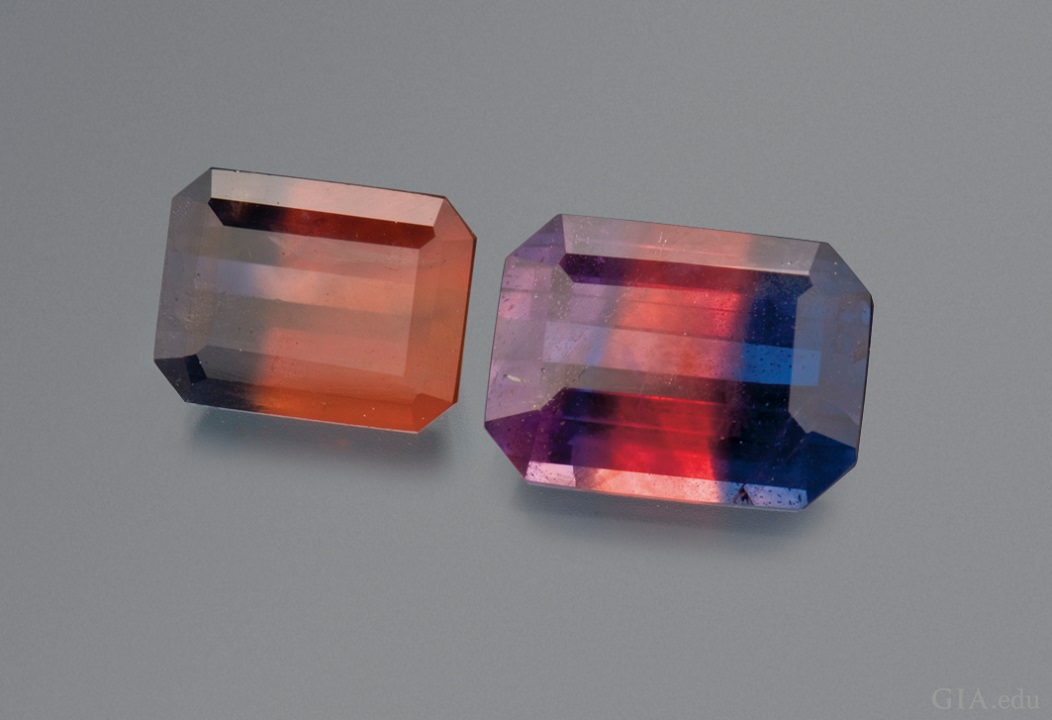 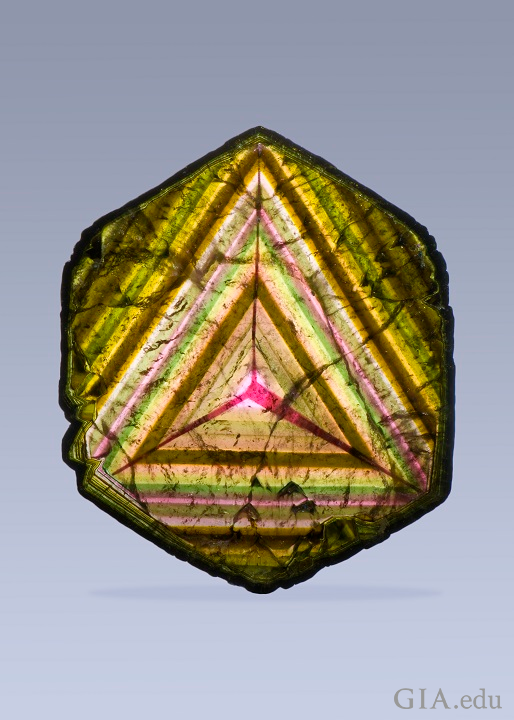 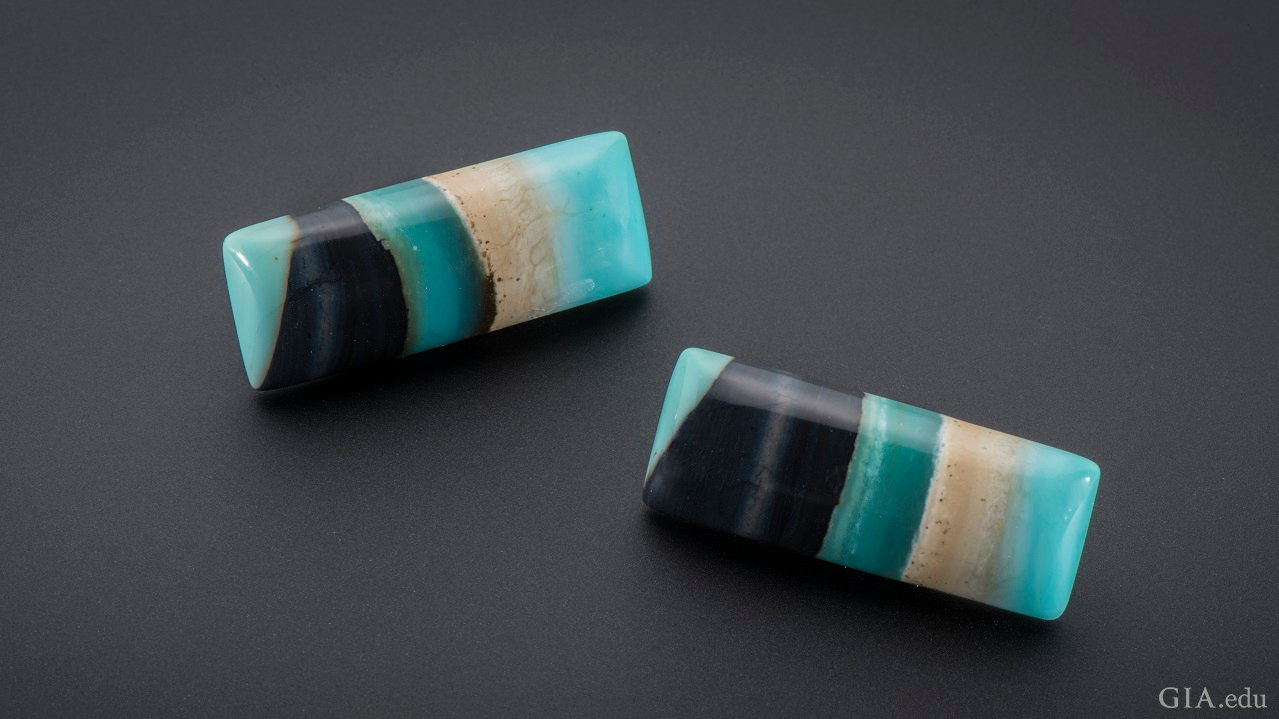 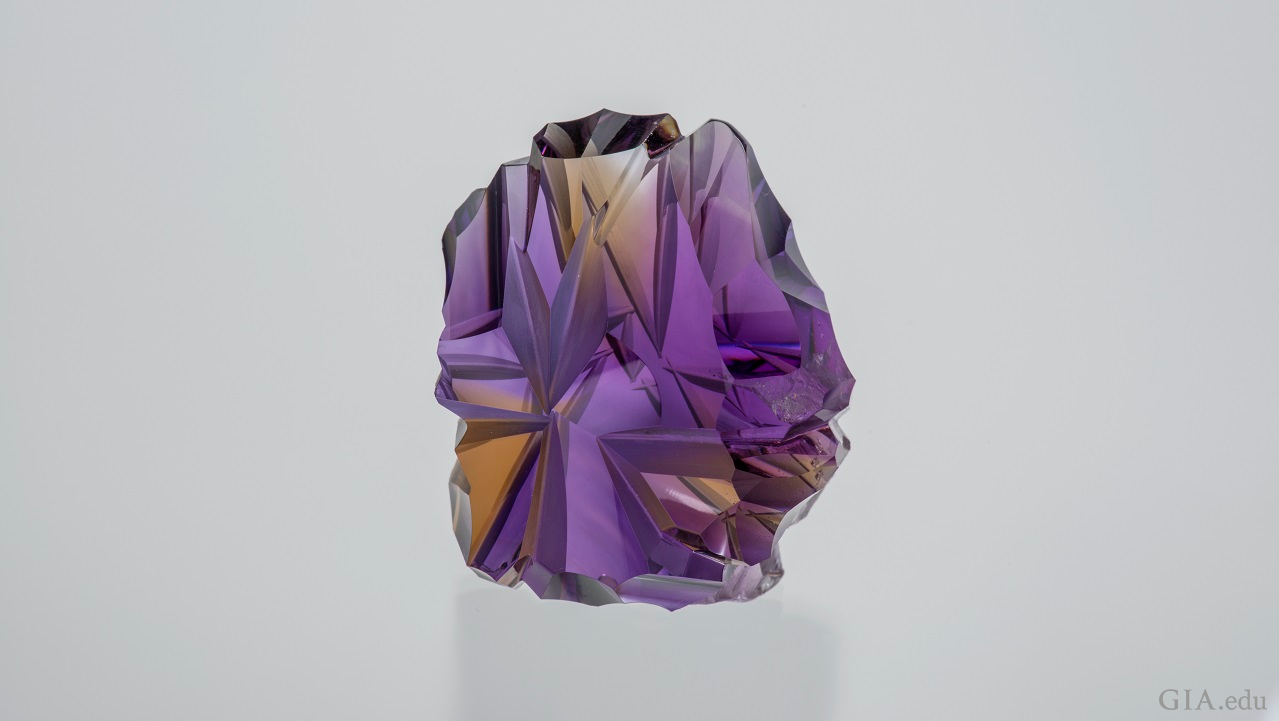 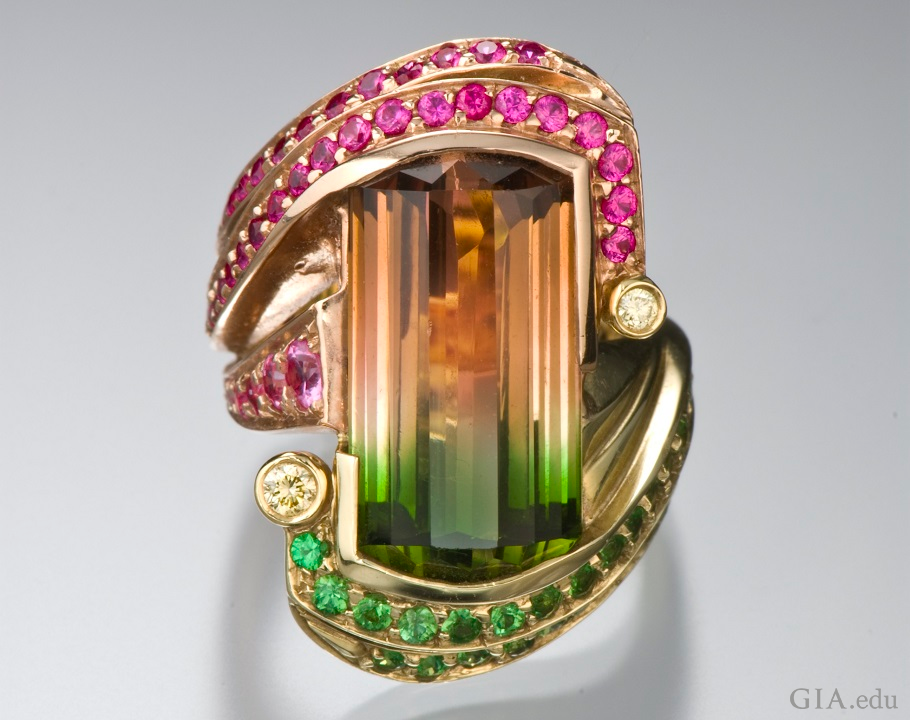 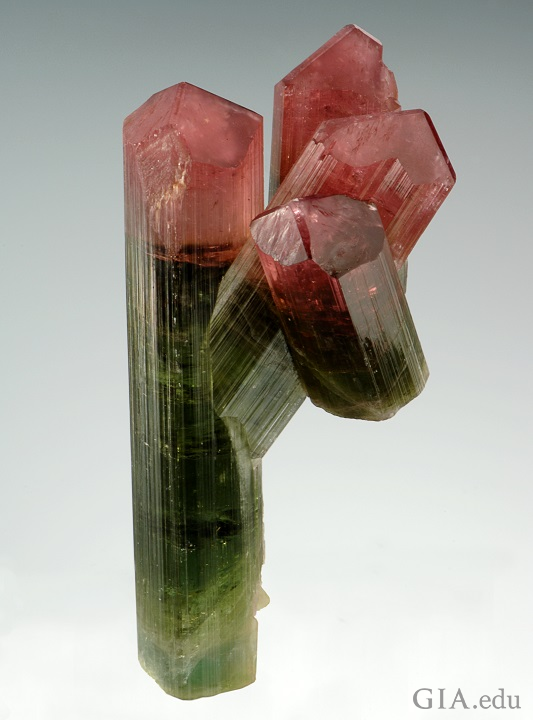 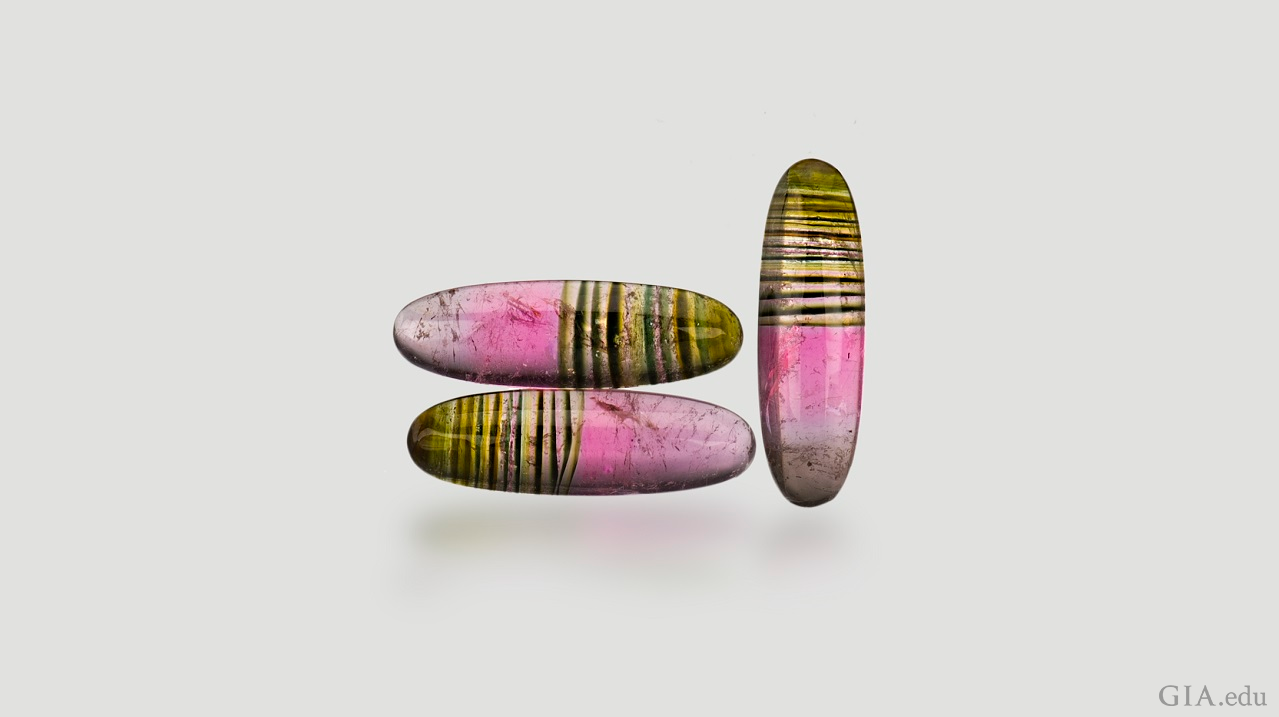 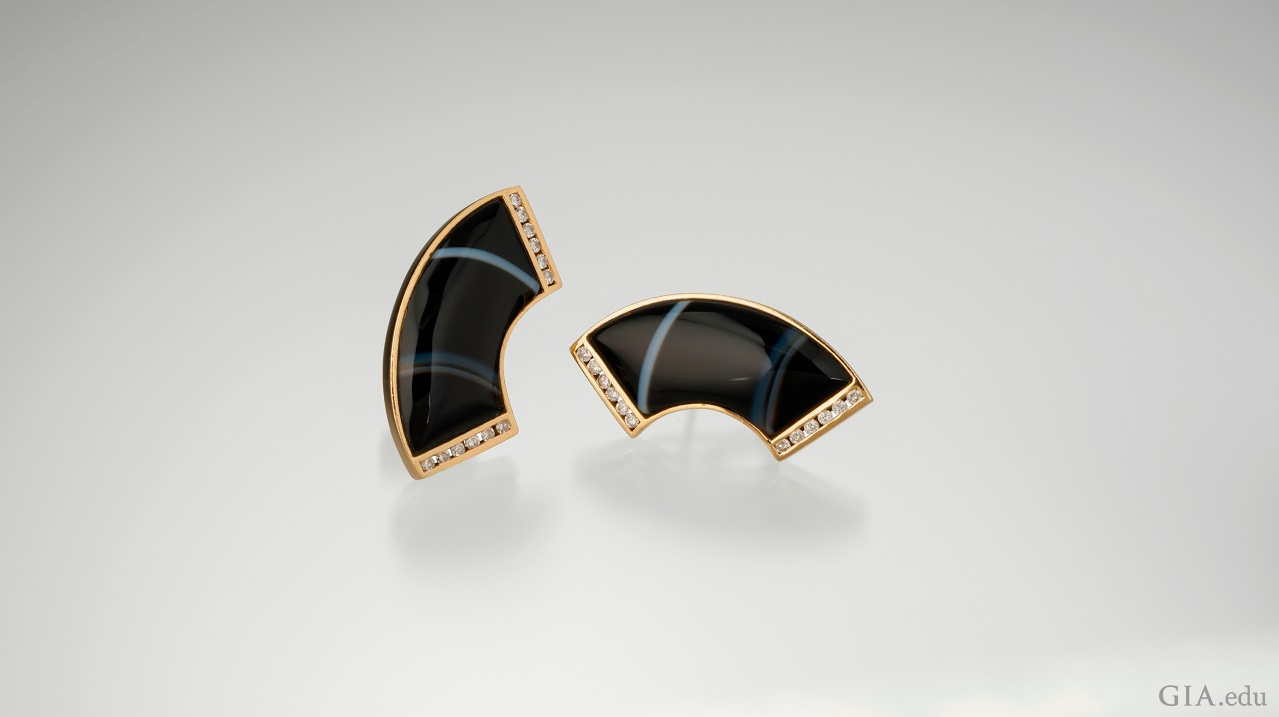 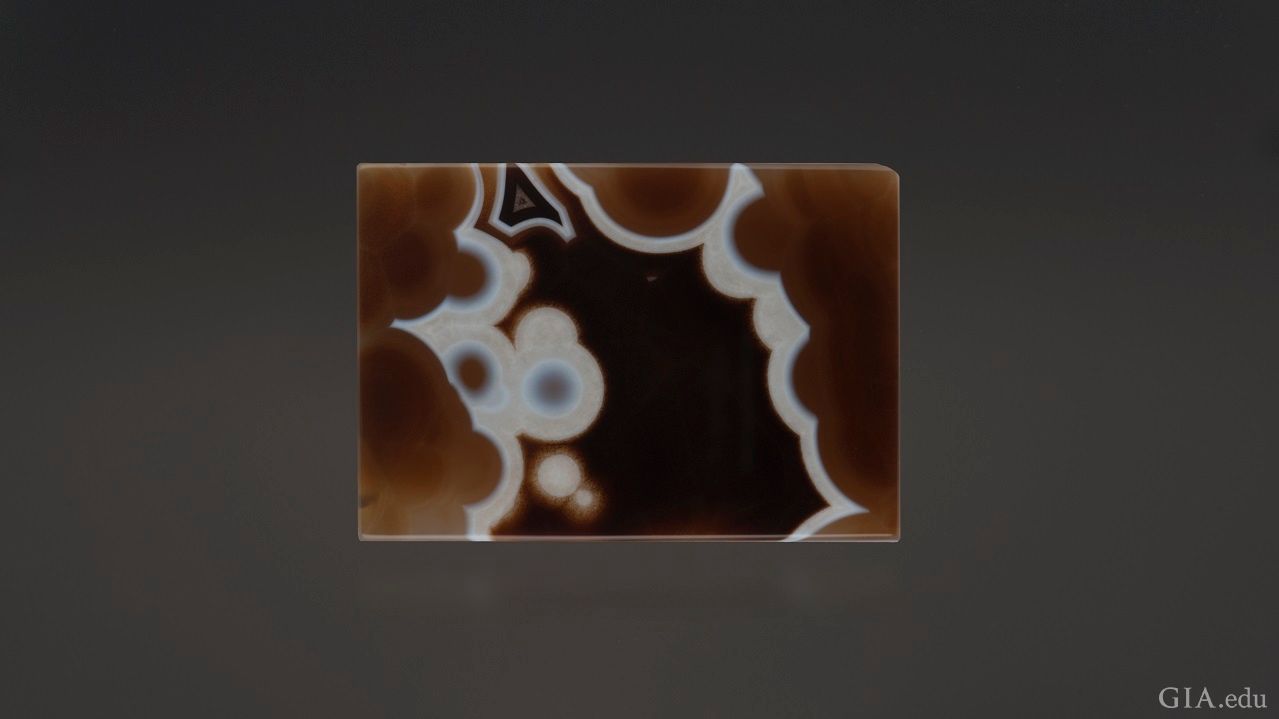 Fluorite also occurs in every colour of the spectrum and is a favourite multicoloured gemstone. It is popular with collectors because of its bold colours. Its cubic crystal growth results in a variety of crystal shapes. The word "fluorescent" is derived from the mineral fluorite since many specimens fluoresce strongly, exhibiting a prismatic colour variation when viewed in ultraviolet light. The softness of fluorite (4 on the Mohs hardness scale), suggest it is best carved into ornamental objects. Rarely faceted, cut fluorite is a collector’s prize, especially when it shows great variety of colours in one gem.

The colourblocking trend in fashion may be a recurrent theme, but the popularity of multicoloured gemstones exhibiting a similar effect is enduring.