The organisation acknowledged that American consumers are concerned about political and economic uncertainties and worried that tariffs will bring higher prices – another survey found that new tariffs will cost households $862 (£665) this year on average – but noted that they are generally in good financial shape, which should cancel out most concerns.

Specific to jewellery, the Edge Retail Academy, a consulting firm for independent retail jewellers, noted that sales of coloured gemstones have been strong all year and that, while unit sales of coloured stone jewellery have only increased by 2%, dollar volume is up 16% as consumers seek higher-priced pieces. The Edge also noted that diamond jewellery sales were running about 5% ahead of last year.

Another survey from RetailDive, a news service for retail executives, said that tariffs may add as much as 15% to popular gift products, such as smartwatches, TVs, audio gear and, this quarter, video game consoles and even smartphones. Like the NRF, the RetailDive survey found that, while they are increasingly anxious about the gyrating stock market, political rhetoric and trade wars, consumers still have the means to keep spending.

Not everyone is benefiting from consumers’ spending mood. RetailDive reported that a record 7,300 retail stores have closed in the US this year. Much of this number comes from the decline of large, regional shopping centres that have been losing business for years, and this has been accelerated by the fact that their traditional “anchor” stores have seen their own sales deteriorate.

After the Christmas season, there remains a big question mark. At least one major bank’s forecast sees US retail slowing down.

UBS, a major Swiss investment bank, is predicting a 2% decline in US retail jewellery sales next year, in the wake of a slowing economy and a bearish stock market. It believes the stock market will decline by an average of 13% next year, putting a brake on consumer sentiment and dampening demand for luxury products, including jewellery.

The bank predicted, however, that Chinese demand would begin to recover because consumers there will have adjusted to the effects of the trade war. A majority of them remain optimistic for the coming year, but report says that consumers will likely opt for pieces with lower price points.

In Hong Kong, however, the ongoing protests caused August retail sales of jewellery and watches to plunge 47% from the same month last year, the government statistics agency reported. Tourism was down 39% and visitors from the mainland were down 41%. 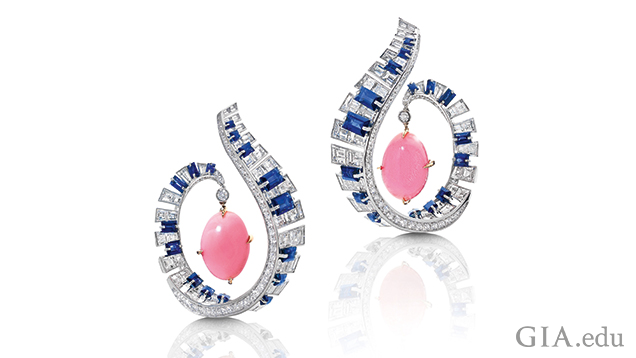 Hu's Ellington earrings feature a conch pearl, suspended from a scroll surround designed as piano keys. They are set with rectangular sapphires and baguette diamonds in 18K white and pink gold. They sold for $278,819 (£215,177). Courtesy of Sotheby's

A jewel designed by GIA alumna Anna Hu, on commission from Sotheby’s, drew a winning bid of $5.8 million (£4.5 million) at the auction house’s 7 Oct Hong Kong sale. The necklace features a GIA-graded 100 ct Fancy Intense yellow diamond set in the shape of a Dunhuang pipa, a traditional four-stringed Chinese musical instrument that is depicted in an ancient mural in Dunhuang. The piece sold for well above its pre-sale estimate and was the costliest of four items in her Silk Road collection, all of which sold at the auction. 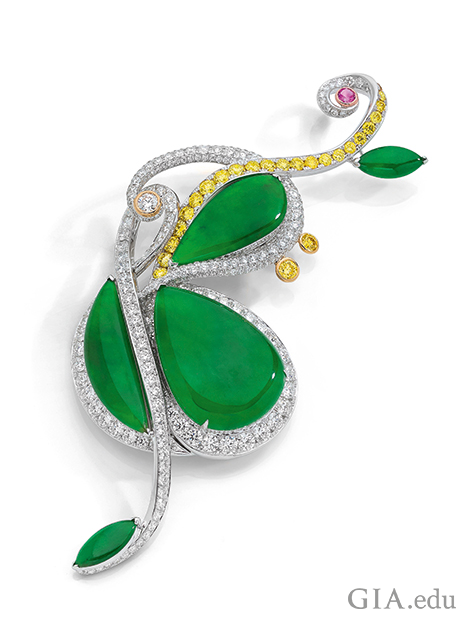 Hu’s stylised cello brooch is set with jadeite cabochons of emerald green colour and accented with brilliant-cut diamonds and diamonds of yellow tint, highlighted by a circular-cut pink sapphire, mounted in 18K white and yellow gold. It sold for $278,819 (£215,177). Courtesy of Sotheby's 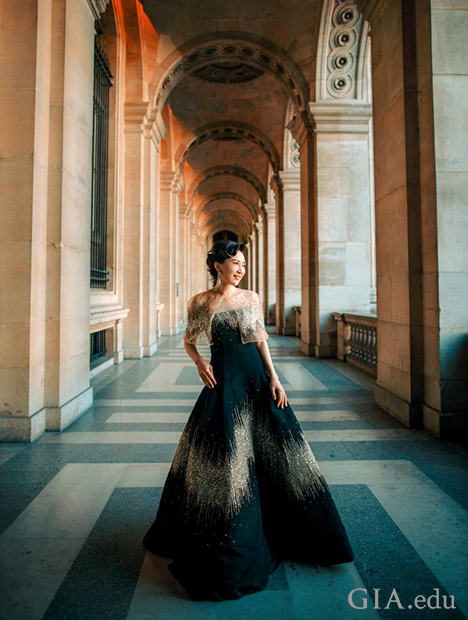 In addition to sale of the Hu pieces, a buyer paid nearly $20 million (£15 million) for a 10.64 Fancy Vivid purplish-pink diamond. At $1.9 million (£1.5 million) per-carat, the price was below prices paid for pink diamonds auctioned several years earlier, but still strong.

As expected, De Beers kept its September cycle sales low -- $295 million (£228 million) – which is slightly higher than August, but 39% below the $482 million (£372 million) it allocated the corresponding month last year.

De Beers is permitting clients to refuse up to 50% of their allocations and continues to offer to buy back 30% of the 2 to 10 ct rough diamonds it has sold this year. Such buy-backs are unprecedented for De Beers, but with industry banks no longer funding rough purchases that they deem unprofitable, the company has little choice. Prices of polished diamonds have to rise for the banks to resume lending and the only way that can happen is to reduce supplies in dealers’ hands.

The Financial Times reported that De Beers’ yearly sales are running 27% lower than last year’s levels. De Beers said its priority is to help the industry recover from this period of soft prices and oversupply that continue to sap profitability and undermine polished prices, which also continue to ebb.

Diwali, the holiday during which the Indian gem and jewellery industry takes a traditional two-week break, begins on 27 Oct. Sometimes manufacturers extend the break during periods of slack demand, so the industry will be watching closely to see how many of them delay their re-opening and for how long.