Encouraging demand at the March Hong Kong Gem and Jewellery Show has buoyed the industry’s mood. Demand for diamonds and finished jewellery products was better than expected, prompting the belief that the Chinese market has finally found its level after two years of sharp declines.

Expectations were fairly low going into the show, but the steady buying of better quality commercial goods under a half carat was a good indication that broader segments of the market had returned to buying jewellery.

Coloured gem prices remained stubbornly high, despite the decline in Chinese demand. Gem sellers report that primary dealers who control much of the quality emerald, sapphire and ruby trades are sufficiently capitalised to hold stocks until they believe buyers will meet their price demands. These dealers raised prices last autumn in Hong Kong, even as demand from that part of the world ebbed, and Tucson saw no real concessions. As a result, the market is somewhat paralysed and demand, as noted previously, is rising for substitute colours (tanzanite for sapphire, spinel for ruby).

Dealers at the March Hong Kong show believed buying at trade shows last year was overly cautious and that jewellers in China needed to restock, even if at a lower level. Retail sales in all categories decreased by 3.1% in Hong Kong last year. And while figures for mainland retail sales have not yet been compiled, the three main retail jewellers that together claim 12% to 15% of the country’s jewellery sales − Chow Tai Fook, Chow Seng Seng and Luc Fook − all reported double digit declines. Further limiting growth is the fact that these chains have cancelled or postponed store openings, the source of much of their growth over the past decade.

The Baselworld Fair in Basel, Switzerland opened amid modest expectations in line with the better than expected March Hong Kong Show.

Exhibitors in the Basel gem hall still displayed very large sapphires, emeralds, rubies and diamonds, but also carried more affordable stones that had been scarce in previous editions of the show.

One dealer noted that there was still interest in the rarest and finest gems from some of the extremely wealthy buyers who frequent the show, but stones such as 10 carat-plus diamonds of medium colour and clarity were not selling as well as they had done a number of years ago.

Luxury designers are striving to retain a striking look, but are making their lines more affordable by adding less expensive coloured stones of strong hue to make their statement.

"It’s about strategic placement and what catches the eye," said one designer. "And less emphasis on gem content." 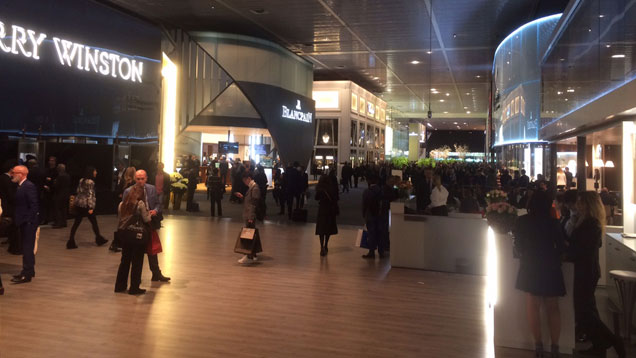 Baselworld showcases many of the world’s high-end jewellery brands and is expected to attract 150,000 visitors from more than 100 countries. Photo by Russell Shor/GIA

As noted in the previous report, this price reduction was apparently enough to give manufacturers some breathing room and return to profitability – particularly because some goods were lowered far more than the 7% average. Rough dealers reported that they were also able to get reasonable premiums on De Beers’ goods from this sight.

Alrosa sold $300 million (£208 million) worth of rough in February after a $480 million (£333 million) allocation in January. The company, which had been selling slightly under De Beers’ prices last year, has held the line this year. Still, reports indicate that its clients bought all or most of their allocations even though they were allowed to leave as much as 30% on the table.

The reduction in prices, along with the severe production cutbacks in the second half of 2015 that took up much of the excess stock in the market, have been driving this recovery. Some worry, however, that speculators have been pushing up demand, which will lead to higher rough prices or, once again, put too much rough and polished into a market that is still slowly recovering.

De Beers’ CEO Philippe Mellier is optimistic that supply and demand are in sync and said his company continues to take a cautious course.

The 1,111 carat rough diamond unearthed in Botswana last year will be sold by Sotheby’s later this year, according to a report in Rapaport Diamonds. Lucara Diamond Corp., the company operating the mine where the stone was found, believes high-net worth individuals and investors may also be interested in buying the diamond, the second largest rough diamond ever found, leaving open the possibility that it may never be cut.

The company told Rapaport it has received offers as high as $40 million (£28 million) for the stone, but believes its value is well above $60 million (£42 million).