The Amber Room: Born From Vanity, Reborn From National Pride

The Amber Room, nestled in the Catherine Palace near St Petersburg, Russia, draws some 7 million visitors yearly, but perhaps no other work of art has been the subject of so many international upheavals as this man-made wonder.

Born from a new king’s extreme vanity, it was created through a succession of court intrigues that saw its designer and head craftsmen banished; sealed a diplomatic pact between Prussia and Russia, then, more than 250 years later, was plundered by invaders; and, ultimately, was recreated during Russia’s most tumultuous period since its revolution.

While I’d heard of the Amber Room – the opening of the reconstructed version in 2003 made the international news – and visited the original site in Charlottenburg Palace in Berlin, it took a visit to the Amber Museum in Gdansk, Poland to grasp how exquisite amber art could be. Furniture pieces and chests fashioned by the same craftsmen who helped build the original room, as well as contemporary pieces, were on display. And beyond aesthetics, the room had a compelling history – both the original and recreated versions.

The basic history of the room was well-documented, but the Polish historian Walter Gierlowski, working from original notes left by the designers, wrote an extremely detailed account of the room’s construction, which he provided to the Baltic Amber Association. Ewa Rachon, project director of the association, kindly provided translated copies of Gierlowski’s work for me.

Rachon also provided contacts for the two primary designers of the reconstructed room, Alexander Krylov and the daughter of Alexander Zhuravlov (one of the researchers for the second Amber room project in 1979). Both were able to provide detailed papers on the research that went into the project and the challenges it faced.

The final piece of the puzzle was the result of a happy coincidence at a 2017 trade show in Munich, where I was able to interview at length the two principals of the amber studio who executed the design, Marina Trutanova and Boris Igdalov.

Thanks to all of them, the article and photos published in the Winter 2018 Gems & Gemology is a complete, detailed history of both the original and recreated Amber Rooms from as many first-hand sources as possible. 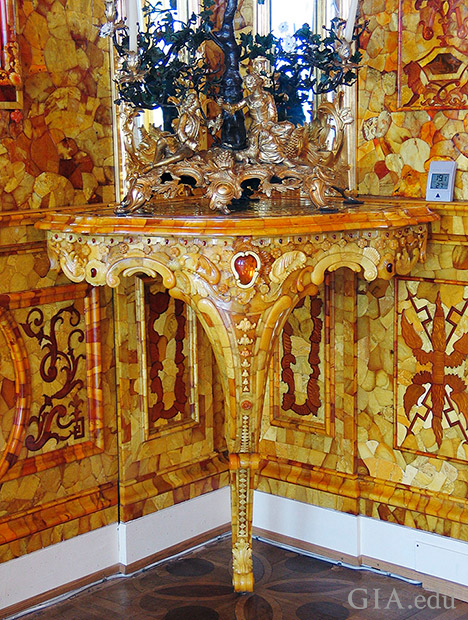 A corner section and end table showing the detail of the multi-hued recreated amber mosaics, the bas-relief employing darker shades of amber and the table itself, which is also coated with amber. Photo courtesy of Amberif

The story begins in 1701 when Frederick, the Prince elector of Brandenburg, was elevated to king of Prussia. His realm extended from Koningsberg in modern-day Russia, westward across the Baltic coast through Poland and most of northern Germany. He made Berlin’s Charlottenburg Palace the centre of his rule and one of his first actions was to commission a room made entirely of amber.

His choice of amber was not a royal whim. The southern Baltic coast had been a major source for the material – petrified pine resin – since before recorded history and was highly prized by the ancient Romans. It was also a staple of the economies of Danzig (now Gdansk in modern Poland) and Konigsberg. Objects made of amber – chests, dressers, immense mirror frames – were presented to foreign diplomats to seal alliances and in this tradition, Frederick desired the greatest amber treasure of all.

The designer of the room, Andreas Schluter, created it as a series of panels: amber mosaics backed by wood. In addition, the design called for amber bas-relief wreaths, cameos and elaborate mirror frames to be applied over the amber mosaic. Other decorative carved amber elements – flowers, garlands and figures – were to be mounted on the cornice above the wall panels. Schluter recruited Danish craftsman Gottfried Wolfram, who was renowned for creating furniture and objects from amber, to execute the room.

The project went slowly. After six years, Wolfram’s workshop had completed only a quarter of the panels, frames and decorative elements. By then, Schluter had fallen out of favour with King Frederick – so out of favour that the King replaced him with his guard captain, Eosander von Goethe. When Wolfram complained about his lack of payment, Goethe sacked him and ultimately forced him to flee back to Denmark.

Two other amber craftsmen, Gottfried Turau and Ernst Schacht, were hired to take over the project, and by 1713 they had completed most of the panels and decorative elements. King Frederick died that year, however, and his successor, King Frederick William I disdained such extravagance and ordered a stop to all work. The wall panels and carvings were locked in the Berlin armoury, where they languished for three years.

Frederick traded all of the completed amber panels with Russian Czar Peter I in 1716 in exchange for a company of 40 grenadiers to seal an alliance between the two against Sweden. Thus, the Amber Room became a Russian treasure.

The Russians ran into a major problem, however. The panels were specifically designed for a room in the Berlin palace that was much smaller than any of those in Russia’s royal residences. Peter I seemed to take little interest in them until his daughter Elizabeth put them on display at the St Petersburg Summer Palace in 1730. When she ascended to the throne in 1743, she ordered the panels moved to the much larger Third Winter Palace in that city, forcing her to hire another crew of craftsmen to build out the room to fill the space.

Without the amber-working skills of the Danzig craftsmen, builders resorted to mirrors and pilasters (columns sent into walls) to fill the space between the panels, and painting to simulate an amber mosaic atop the walls and in the narrow spaces between the pilasters.

The craftsmen managed the task, not without mishaps, and the room served the regent well until she, once again, ordered the panels to be removed and sent to the newly built Catherine Palace in Tsarskoye Selo, about 20 miles outside St Petersburg. The room she selected was literally three times the area of the original and took another 37 years (until 1780) to complete. 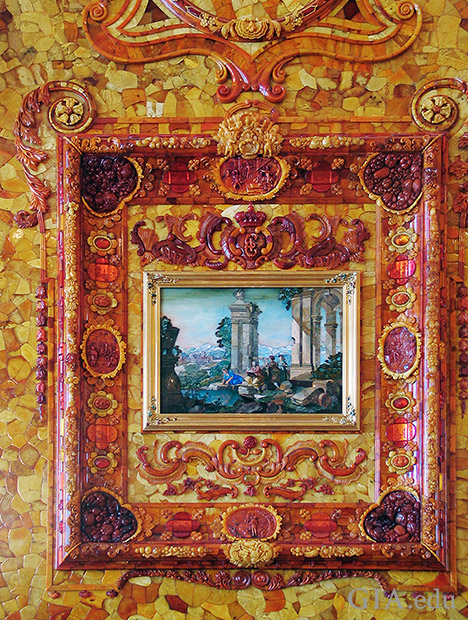 Detail showing the Florentine mosaic “Sight”, one of four such recreated mosaics in the room. The frames are fashioned from carved and sliced pieces of amber of various hues. Photo courtesy of Amberif

The Amber Room remained an integral part of the Catherine Palace through the following century and the 1917 revolution, until 1941, when invading Nazi soldiers burned the palace and seized the amber panels and adornments, claiming they were German-made works of art. The army unit, which included art historians, packed up the entire contents of the room in three days and put the panels on display in German-held Konigsberg until 1945 when Allied armies began bombing the city.

An account by a German officer tells of the hurried efforts to pack up the room panels yet again and ship them out of harm’s way. He was apparently the last person to see the original Amber Room panels, as they never reached their destination and, despite periodic tabloid reports of the discovery of the lost room (usually with a wildly exaggerated price attached to it), no one has ever located them.

The Soviet government approved a plan in 1979 to recreate the room, which it deemed a national treasure, and appointed researchers Alexander Zhuravlov and Alexander Krylov to begin the groundwork. They literally had to pick up the pieces – a few amber bits found in the Konigsberg site – and worked from a set of grainy black and white photographs and a single colour slide to determine the design and colour scheme of the original room. Three years of examining other amber artefacts and analysing the black and white photographs to discern colour patterns were necessary before any work could begin.

The Soviet government provided the amber from the Baltic deposit gratis, as a “state resource”. The amber studio, headed by Marina Trutanova and Boris Igdalov, faced several challenges. No one knew the composition of the adhesive or the dyes and treatments used to colour the material, especially for the decorative elements. Through a system of educated trial and error, the studio craftsmen managed to replicate the 18th-century techniques used in the panels’ construction. Progress was slow and with only 40% of the room completed, world events again intervened: the Soviet government dissolved and no more funds were available for the reconstruction.

The unfinished project languished for seven years through the turmoil and fiscal problems of the new Russian Republic, but in 1999 a corporate angel arrived – the German energy company Ruhrgas agreed to put an additional $3.5 million toward the project, provided it was completed by April 2003.

Since amber is a “living stone” that reacts strongly to relatively small changes in temperature and atmospheric pressure, there is always work to be done to maintain the completed room, especially with some 7 million tourists traipsing through it every year.

The History and Reconstruction of the Amber Room (in English)

Chronicles the history of this cultural landmark, originally assembled for the Prussian king between 1701 and 1714, and its reconstruction by the Soviet Union starting in 1979.

Amber has been found in various parts of the world, but the main historical source is the land that surrounds the Baltic Sea.