And what a dream it is: after retiring from the United States Marine Corps with more than three decades of service and 20 deployments, Diaz finally pursued his decades-long goal of earning a Graduate Gemologist diploma from GIA, and began to work as an independent field gemmologist.

For Diaz, the gem and jewellery trade is no mere industry, but a family that embraced and mentored him as an 18-year-old Marine.

“On my first overseas assignment, I was on ‘R&R’ and was introduced to a gem broker who worked with Australian opals,” Diaz says. “He was friendly and open to questions, and gave me my first introduction to the ‘mine to market’ concept – he then introduced me to many others along that journey. I was befriended worldwide by brokers, miners, cutters, jewellers − even pearl divers for the Bahrain royal pearl beds.” 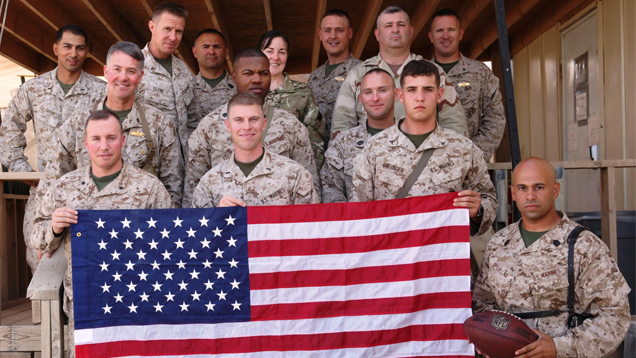 Manuel Diaz, third from left in the back row, served 20 deployments over three decades in the United States Marine Corps. Diaz, who earned his GIA Graduate Gemologist diploma immediately after his 2014 retirement from the Marine Corps, is pictured here on his final deployment, to Afghanistan. Courtesy of Manuel Diaz

The more Diaz travelled with the military, the more he met like-minded gem enthusiasts. In 1987, while stationed in the Philippines, he began to research how he could gain a formal education in gems and minerals.

“I came across GIA in a reference book, and promised myself that I would attend any and all courses they offered when I completed my Marine duties,” he says.

As Diaz gained a working knowledge of gems, minerals and the supply chain, his information proved useful for military operations. On one combat deployment, Diaz was required to investigate and advise how Marines might reduce conflict at a nearby marble quarry. Hostile forces there were taking over the deposits, stealing income and trade revenue from the rightful owners.

“Some personnel immediately recommended air and artillery bombardment of the quarry,” Diaz says. “But having an experienced knowledge of mining operations, I quelled those ideas for a more tactical approach. The quarry began operations that soon deterred the hostiles and kept them from taking advantage of the deposits. It reduced the income base for hostile forces and increased revenue for the indigenous people.”

Diaz also found that his fellow Marines wanted to tag along on his exploratory trips during their “R&R” breaks.

“There were times I would take 10-20 people on a trip and be able to teach them about gems and participate in their personal trades,” he says. 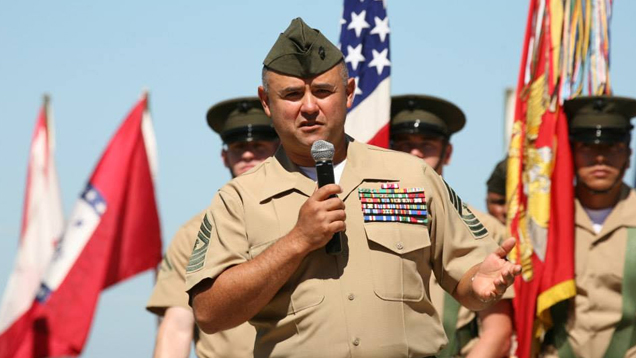 Manuel Diaz, addressing the crowd at his 2014 retirement ceremony at the Marine Corps Base Camp Pendleton, says that no one in his family was surprised at his career change. He spent his time off when on international deployments exploring and learning about the local gem and jewellery industry. Courtesy of Manuel Diaz

Diaz was able to pursue his dream in 2014 when he retired as a Master Gunnery Sgt. from the First Marine Expeditionary Force at Marine Corps Base Camp Pendleton – just a 20-minute drive from GIA’s World Headquarters in Carlsbad. He was able to use the G.I. Bill to begin his studies online and on campus immediately and, by the end of the year, had earned his AJP, Graduate Pearls and Graduate Gemologist diplomas.

As a student, Diaz attended a lecture by Vincent Pardieu, a GIA field gemmologist based in Bangkok, and approached him to talk afterwards. Soon after, Diaz was on his first expedition as an independent field gemmologist, travelling along with a GIA team to Vietnam. It turned out that Diaz – who had extensive experience in expeditionary engineering, international security, emergency response management and military special operations (including serving the U.S. Department of State as a Security Guard Detachment Commander for consulates and embassies in Athens, Greece and Addis Ababa, Ethiopia) – was well-equipped to handle the rigours and often-harrowing conditions of field expeditions.

“I had 30 years to hone my skills in packing and personal equipment preparation for long durations,” he says. “Nowhere else could a person gain the experience and knowledge given to a Marine going through deployment preparation and execution. Our thought process is different – foreign for someone who has not had to survive a life-altering experience.

“It’s not that there are no new experiences for me, but I travel prepared, regardless of location and time on deck,” says Diaz, who is also certified as a master scuba diver. “With the ‘ruby rush’ expedition to Madagascar, for example, I was familiar with the conditions – it wasn’t the first time I had visited Madagascar – and I have a huge amount of experience in jungle environments around the world.” 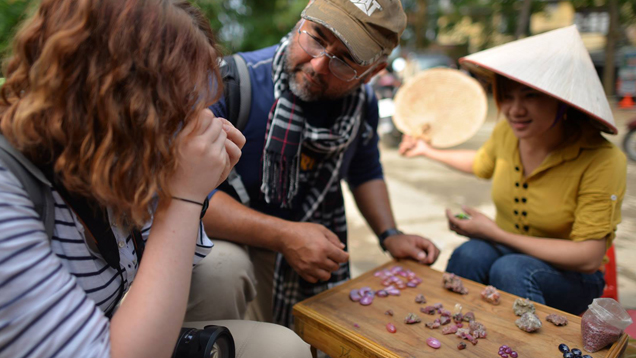 “Know yourself and seek self-improvement – no one is going to do it for you,” says field gemmologist Manuel Diaz, pictured in a morning gem market at Yên Thế, Lục Yên, Yên Bái, Vietnam. After a three-decade-long career in the military, Diaz followed a long-time dream to join the gem and jewellery industry. Photo by Vincent Pardieu/GIA

That preparedness − and not being unsettled by harsh terrain, aggressive people or even life-threatening experiences that could rattle those less-experienced – make it possible for Diaz to focus on the people involved.

“As a Marine, you find that it’s all about those people who are with and around you,” he says. “For me, the experience in field gemmology is about the people I come into contact with. Finding the gem is key, but finding it with those around you – that’s the reason for me being there.”

Diaz, who lives in north San Diego County with his family and volunteers as a docent for the Fallbrook Gem and Mineral Society, also enjoys helping individuals hunt for gems closer to home.

“If a family wants a particular quartz variety, a collector wants to explore a show or market, or a young couple wants a lesson on gem and jewellery purchases, I’m their guy,” he says. “Nothing is more important than tending to the needs and passions of my clients.”

Diaz says his time at GIA – and the “dedicated” faculty and staff members who became like extended family to him – opened the doors to professional dreams that were decades in the making. He is now trying to help other veterans find what lies ahead for them after the military by encouraging them to consider the gem and jewellery industry.

“I’ve lured a few of them to GIA,” he says. “Using the G.I. Bill for my GIA education was a great resource and a comfort for me – that is priceless.” 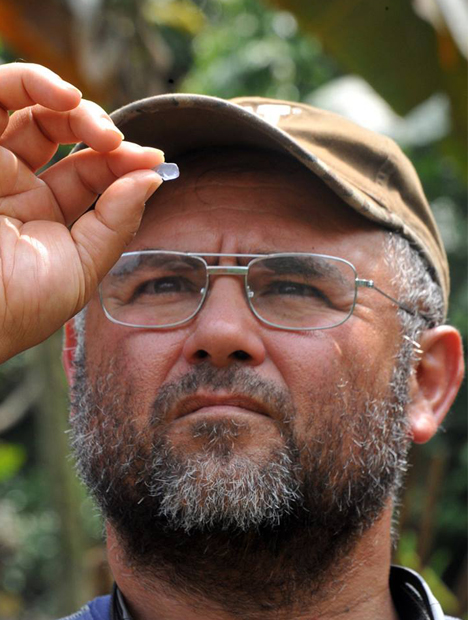 Manuel Diaz, here studying a blue spinel in Vietnam, says his GIA training equipped him to communicate with clients. “Being able to describe colour in such a clear manner is helpful for not only grading, but in being able to explain it to clients looking for a particular hue or saturation in a gem,” he says. Photo by Lucie Martinez/GIA

One of those veterans is Diaz’s brother, Ramon – also a 30-year veteran of the Marine Corps and a retired Master Gunnery Sergeant. Ramon Diaz graduated in 2015 with a Graduate Jeweler diploma and in 2016 with a Jewelry Design and Technology diploma from the Institute.

The brothers are mulling how they might work together in the future, whether that is in the field or helping people learn about and buy gems. But Diaz knows one thing for sure.