2018 GIA Symposium: The Future Belongs to Those Who Adapt

The future will be robust for businesses and individuals in the diamond and gemstone industry who can adapt quickly to change in both consumer preferences and technology. This was the message from various presenters to the nearly 800 attendees of the sixth GIA Symposium held 7-9 October in Carlsbad, California.

The event featured a gemmological research track that brought together scientists and experts from around the world and a business track, conducted by Harvard Business School (HBS) professors, who focused on ways business have responded to disruptive innovations and changing consumer behaviour. 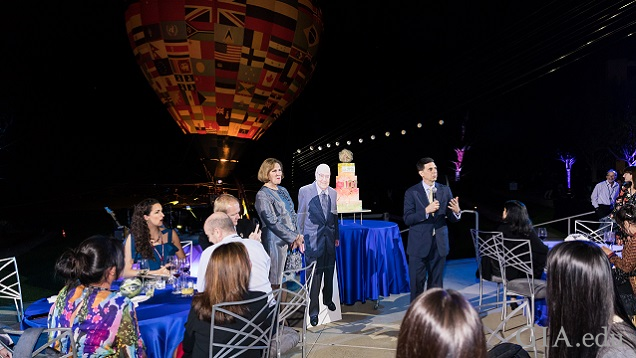 Both the business track and the "Futurescape Forum", which began with an industry forecast via a video from Scott Galloway of the NYU Stern School of Business, centered around several key points: 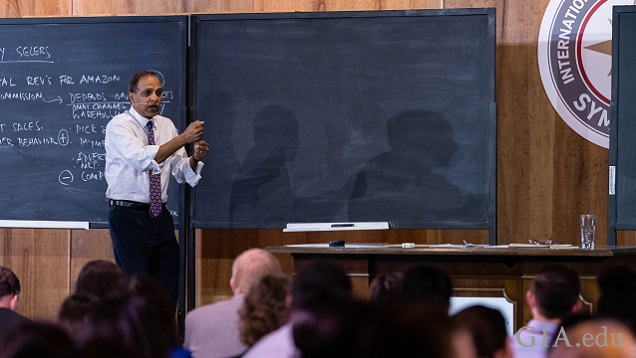 There was broad agreement that retailers must adapt to technology, not just in sales channels, but in ways it can help individualise each customer.

In one discussion led by HBS Professor Dr Krishna Palepu, attendees heard a case study detailing the benefits and risks of selling on Amazon. While the company can offer manufacturers and retailers a new sales platform, there is constant pressure to reduce prices, and in one significant instance, the risk of Amazon sourcing products from the same supplier and selling them at a lower price.

In the “Futurescape Forum”, Drosos explained that omni-channel retailing is a necessity because customers routinely cross channels in their shopping experience; starting online and ending in the store. Online channels can enhance the in-store experience by making it possible for customers to make appointments online – 90% of such appointments result in a sale, she noted.

Wong said that 15% of Chow Tai Fook’s sales by volume are done online, but mainly in small gold items and in charms, such as Hello Kitty and Disney characters. At the high end, Kadakia said that 90% of Christie’s auction business is still done by traditional bidding, but the remainder is online, mainly from younger clients buying pieces under $10,000.

“This is how we target younger customers,” he said. 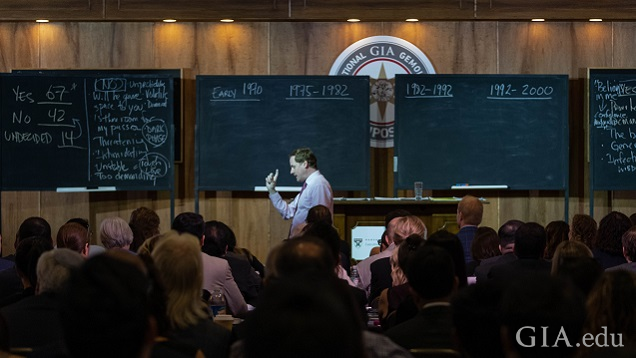 Connecting with consumers in new ways with new messages is necessary today. And, trying to be all things to all people makes everything average, which consumers do not want. In addition, business must adapt to a millennial workforce comprised of people who switch careers often because they value diverse experiences and often do not want to stay for a company over the long term.

The business programme, led by Dr David Ager, managing director of executive development at HBS, analysed the case of Swiss watch executive Jean-Claude Biver, who helped revitalise an industry beset by competitive challenges from Japanese quartz watches and a lack of new thinking.

Another Harvard session led by Palepu described how Apple’s success was driven by making consumers love technology and equate it as a luxury brand.

“It delivered a difference that the customer wanted,” Palepu said.

The changing workforce was a key discussion point in the “Futurescape Forum”. Goldberger told the audience that organisations should not become too insular and that people with diverse backgrounds bring new thinking. Also, he said, “the reality of today is that tech people move every two or three years, so we have a choice: do we lose them entirely or benefit from their talent while they are here.”

Cleaver noted that there are excellent opportunities to diversify the diamond industry because it traditionally has not been so, while Wong said his company brings in talented designers by offering them a platform to create and sell their designer pieces.

“Talented people need that freedom,” he pointed out.

Johnson added that not everyone wants to switch careers, but businesses must adapt to workers who cannot be on hand full-time. 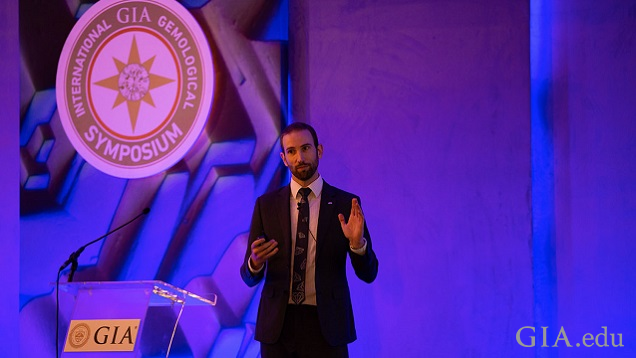 GIA research scientist Dr Evan M. Smith presenting his most recent discoveries on “The Formation of Natural Type IIa and IIb Diamonds” during the research track. Photo by Eric Welch/GIA

Laboratory grown consumed a great deal of discussion in the gemmological research sessions and in the “Futurescape Forum”, where panelists agreed they have a place in the market, but that natural diamonds will still be the choice to mark life’s landmark occasions.

Dr David Fisher, of De Beers’ Technologies, described the evolving technology in detecting synthetic diamond, noting “the key to any detection technique for synthetic diamonds is a fundamental understanding of the differences between them and natural diamonds.” Dr Sally Eaton Magana, of GIA, offered a summary of CVD grown synthetics seen in the Institute’s labs.

The discussion in the “Futurescape Forum” focused mainly on the market for man-made diamonds.

Kadakia said he was confident that natural diamonds will remain the consumer choice because they will always have value, while synthetics will not hold value over time.

Goldberger noted that, while engagement ring buyers invariably prefer natural diamonds now, we cannot take this for granted for the future. He cited the examples of consumers who in the 1990s said they loved browsing bookstores, and then deserted them for online channels.

Cleaver said that synthetic diamonds’ place in the market was firmly in the fun and fashion side. 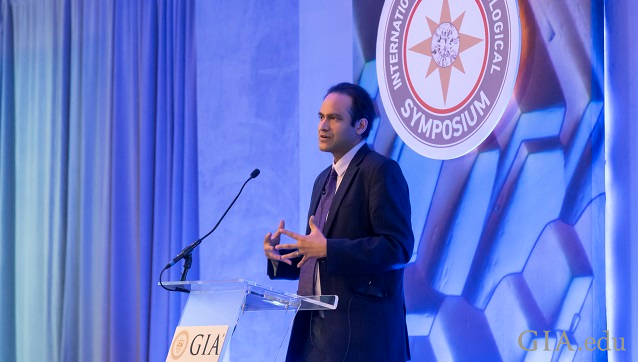 Research track keynote speaker Dr Saleem Ali, a Blue and Gold Distinguished Professor of energy and the environment at the University of Delaware, presented "Gemstones and Sustainable Livelihood: From Mines to Markets". Photo by Emily Lane/GIA

Dr D Graham Pearson, professor at the University of Alberta, Canada, described advances in understanding of how diamonds were formed through geothermal analysis, and Dr Steven B Shirey, of the Carnegie Institution for Science, talked about how to interpret diamond ages by studying mineral inclusions within the stones.

Sustainable gem production and trading was also an important topic at the Symposium.

Dr Saleem Ali, of the University of Delaware, said gemstones had a good story to tell: they are passed down through generations; they are an important source of wealth transfer from rich nations to poorer ones; and gem origins often determine value, which provides a base for consumer assurance.

In the “Futurescape Forum”, Cleaver related the economic and political success of Botswana, once one of the world’s poorest nations. Diamond revenues, he said, coupled with good governance, helped transform the country into one of Africa’s most prosperous nations.

Echoing Ali, he said “it’s a story not always told – the good that diamonds can do in employing people and development.”

Drosos said customers are interested in knowing the origins of their diamonds and that Signet is working to acquaint all of its employees with its corporate social policies regarding sourcing.

Wrapping up the Symposium, GIA President and CEO Susan Jacques said, “The future of our industry is incredibly bright. Disruption is not unique to gems and jewellery, and these challenges are great opportunities.”

“Embrace innovation and embrace change, for those most able to adapt to changes survive and thrive.”

The Symposium proceedings will be published in the Autumn 2018 issue of Gems & Gemmology, GIA’s quarterly journal, which will be available at no cost on GIA.edu in November.