Demand for diamonds and coloured gems at the 13-19 Sept Hong Kong Gem and Jewellery Fair exceeded the expectations of most exhibitors, even if some of the demand came from other dealers bargain hunting from their colleagues in need of cash. Most dealers reported an improvement on last year’s trade.

Chinese retailers and wholesalers believe consumer demand in China is starting to stabilise at a sustainable trading level after two years of market correction following a decade of double-digit growth. In diamonds of less than a carat, demand centred on medium colours and clarities. Dealers reported a slight upturn in demand for better quality diamonds over three carats. Price was still a major issue, with hard bargaining over relatively small differences delaying a lot of deals.

In coloured stones, demand still focused on finer colours for ruby, emerald and sapphire, with continuing strong demand for popularly priced gems, such as amethyst and citrine.

As with last year, the stronger dealers began the show by buying a lot of goods from colleagues in need of hard cash after finding their credit lines severely reduced or cut off entirely.

As one major dealer noted, “In the past, there were sellers offering big discounts, which pushed down prices for everybody. If we buy them first, it helps us maintain prices.”

Paspaley Pearling Company held its annual tender auction of South Sea white cultured pearls and golden cultured pearls from the Philippines on the final two days of the Hong Kong show. Demand for both varieties remained similar to last year, an executive from the company said. 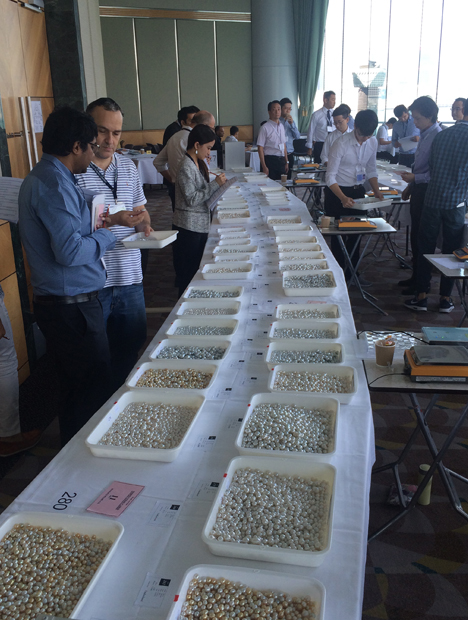 Dealers from around the world inspect lots of South Sea and golden cultured pearls at the Paspaley pearl auction held in conjunction with the Hong Kong Gem and Jewellery Show. Photo by Russell Shor/GIA

Demand at De Beers’ 29 Aug-2 Sept sight (cycle) was strong, according to the company. The $630 million (£485 million) total includes all sales – tender auctions, side deals (called “ex-plan”) and sight sales. De Beers made no announcement about prices, which means they remained steady.

This sight is the last of the year at which rough diamonds can be bought in time to be polished ready to reach key U.S. and Asian markets before the end-of-year holidays.

The total is considerably higher than July’s cycle of $528 million (£406 million); the final three sales of the year will probably show strong increases over last year’s numbers when the market was in extreme turmoil and many clients were refusing goods.

Alrosa, the world’s largest diamond producer by volume, reported that its first half sales totalled 21.7 million carats, a 21% increase over 2015. Its revenues were up 46% over the same period.

In a surprise announcement, Rio Tinto bailed out of the Bunder diamond project in Madya Pradesh, India. The final stages of sampling were complete and estimates indicated that it would yield about 27.4 million carats over its lifetime from a cluster of eight kimberlite pipes. Rio Tinto built a highly automated recovery plant to process the samples, along with ore from the mine, after start-up.

Rio Tinto’s then-CEO Sam Walsh called on India’s Prime Minister Narendra Modi in 2013 to help expedite the approvals process for the project. As late as July of this year the company was issuing optimistic reports that it would begin production in 2019, but later in the month Jean-Sebastien Jacques replaced Walsh as CEO. The company announced it would sell Bunder as a cost-cutting move in August.

A report by Bloomberg said that several large companies have cancelled development plans in India because of costly, drawn out approval processes and land acquisition procedures.

This was the second major diamond project to be scuttled this year. De Beers closed Snap Lake in northern Canada earlier in the year because it had become unprofitable. The company is still seeking a buyer.

Signet Group, the parent company of Kay Jewelers, Jared Galleria and Zales, reported that its second quarter same-store sales were down 2.3% on the same period last year. For Kay Jewelers, the average transaction price fell by 0.8%, but rose slightly for the Zale division, which generally trades in a lower market segment. A statement from chairman Mark Light noted that sales were particularly depressed in “energy-dependent” areas of the U.S., referring to regions where oil and gas production is a significant part of the economy. In addition, stagnant wages and a general malaise in the national mood have dampened demand for luxury goods.

Tiffany & Co. saw its second quarter same store sales fall by 9% worldwide. Declines were steep in every major market: 8% in North America; 6% in Asia-Pacific; and 17% in Europe. The company cited “well-known” economic factors for its sales decline, as well as a steep decline in Chinese tourism that has had a worldwide impact on the company’s revenues.