The first discovery happened in 1998, near Ilakaka Be. Because the village was near Route Nationale 7 (RN7), the main road linking the capital city Antananarivo to the port of Toliara, the locals quickly found a thriving market with Thai and Malagasy merchants. Within months, miners from around the island settled near the bridge on the Ilakaka River, and a boomtown was born. Ilakaka is a much quieter place today. Tourists regularly stop there, while Sri Lankan, Thai and Malagasy gem traders still conduct business. 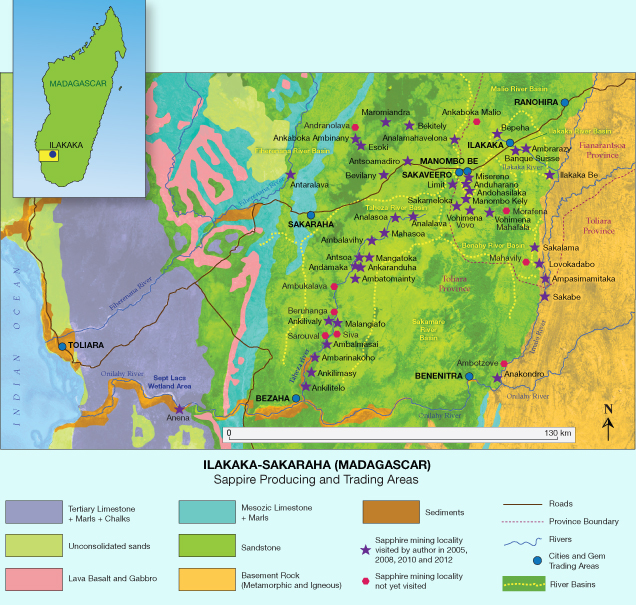 A map of the Ilakaka-Sakaraha mining areas of southern Madagascar.
Many gemmologists and traders are surprised by the extent of the deposit. Discoveries occurred beyond the Ilakaka area on the Malio and Fiherenana River basins in the north and on the Benahy, Taheza, Imaloto and Onilahy River basins to the south and west of Ilakaka (basins are separated by yellow dots on the map). As the map shows, the deposit extends about 120 km east from Anena (on the Onilahy River) to Anakondro (on the Imaloto), and nearly 100 km north from Anena to Antaralava (on the Fiherenana) and Anakondro to Ankaboka Malio (on the Malio).

Ilakaka River Basin: The discovery near Ilakaka Be fell short of its early promise, and within months activity moved upstream to Ambarazy, which was briefly an important trading centre, and the famous Banque Suisse mining site, one of the largest pits ever dug by hand in Madagascar. Mining also occurred north of RN7 on the western side of the Ilakaka River, up to the village of Bepeha. Mining was not allowed on the eastern side of the river, which is part of Isalo National Park. While small groups were still active at Banque Suisse in 2012, mining had nearly stopped elsewhere in the basin. In addition to a few groups working around the town, a small mechanised Thai operation is still at Amabrazy. Overall, some 300 people are still mining in the Ilakaka River basin, a fraction of the estimated 60,000 there in 1999.

Eastern Boundary and Imaloto River Basin: Very few sapphires have been found beyond the eastern limit of the sandstone-related rocks. The only exceptions are the secondary deposits along the Imaloto, near Lovokadabo, Ampasimamitaka, Sakabe, Ambotzove and Ankondro, where sapphires were trapped in river sediments, probably transported from sandstone-covered regions by the Ilakaka and Benahy Rivers. In 2012, the area along the Imaloto seemed to be producing again after several relatively quiet years. Gems were also found in several areas closer to Sakalama. A rush occurred in 2004 at Ampasimamitaka, where the sapphire-rich Benaha River joins the Imaloto. A parcel of mostly milky blue sapphires mined there were later found to contain natural beryllium. In 2008, it was difficult to find miners anywhere except Sakabe. Returning in 2012, the contributor witnessed a rush near Sakalama, with about 200 people at two large pits. Nearby at Mahavily, another 100 were reportedly mining on the Benahy River. At Ampasimamitaka, about 50 people were mining on the Imaloto. Other groups were reportedly working upstream to Lovokadabo, but also far downstream. At Ankondro, 50 km downstream near Benenitra, about 50 people were digging for pink and blue sapphires. Another 200 were said to be near Ambotzove. In 2012, we estimated 500 to 1,000 miners on the eastern side of the region, mostly along the Imaloto. 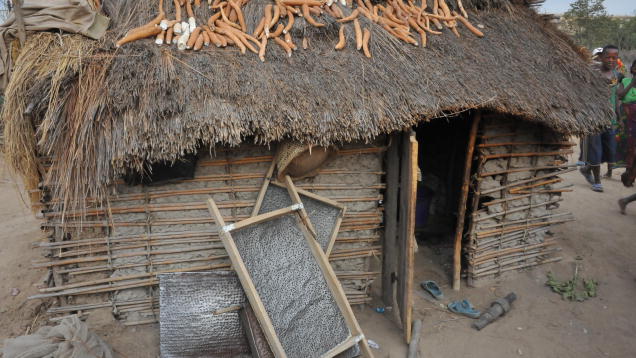 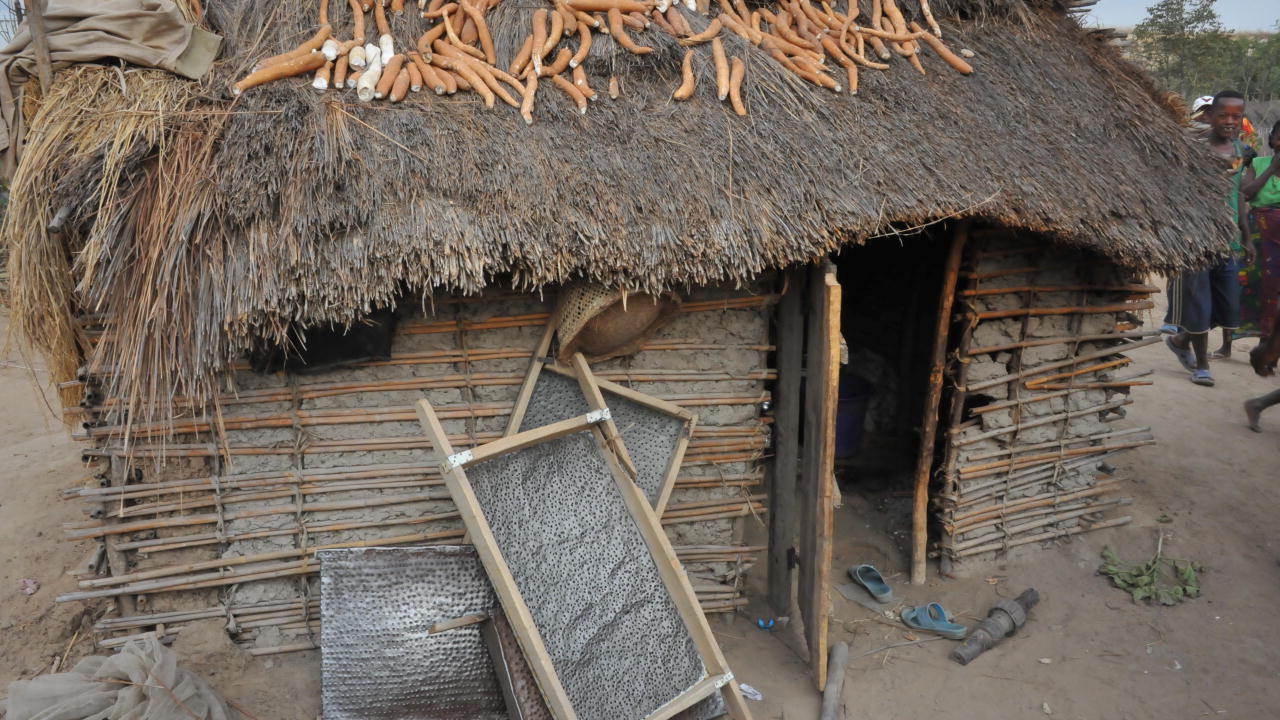 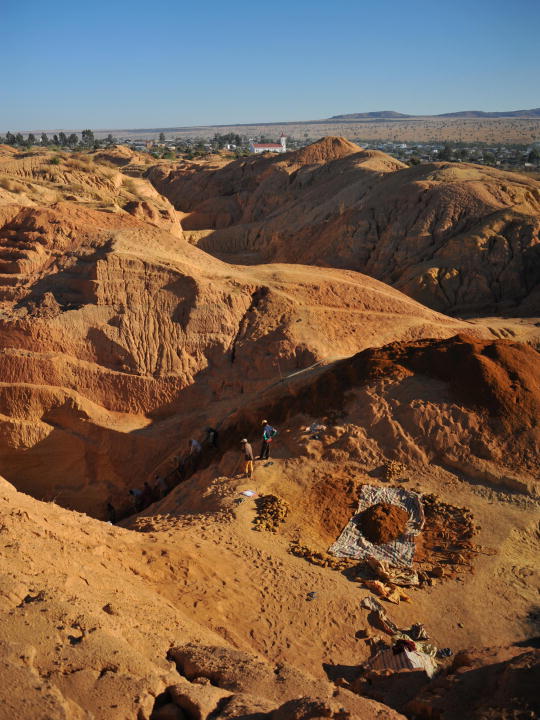 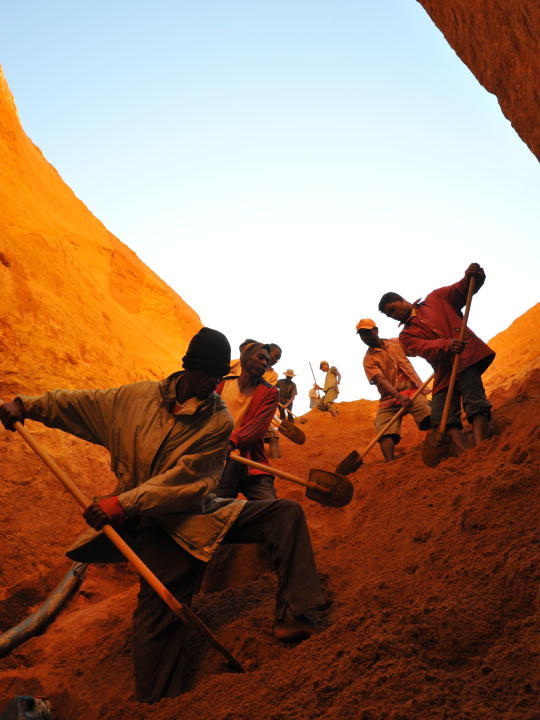 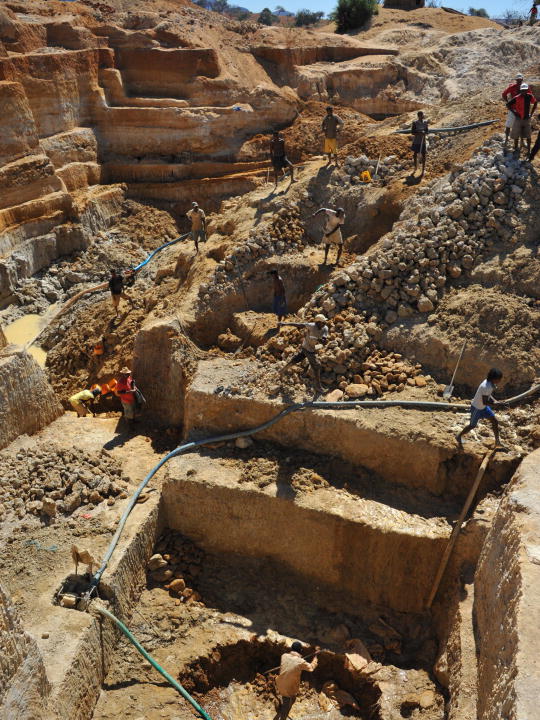 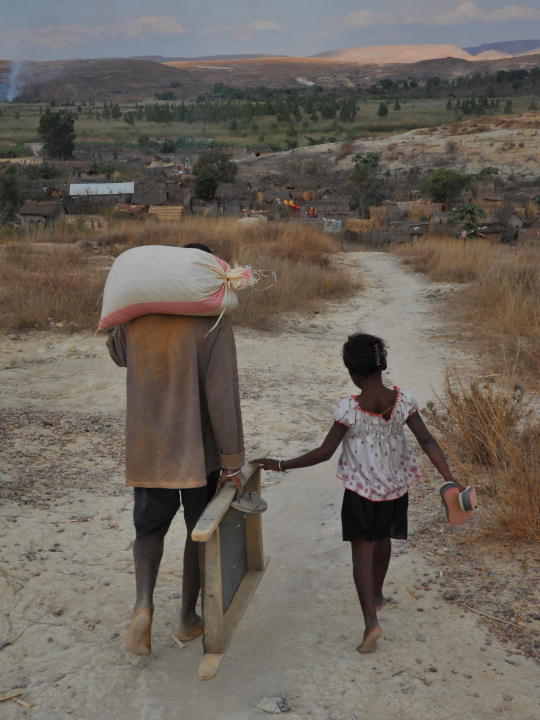 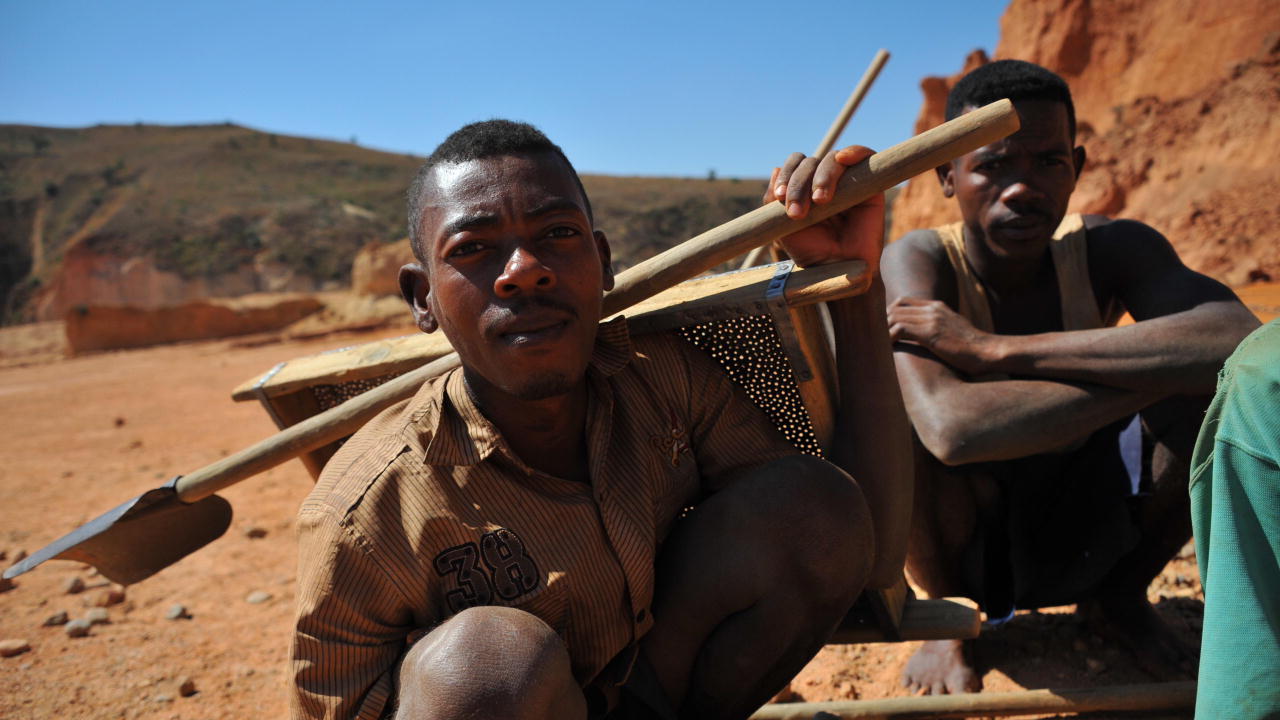 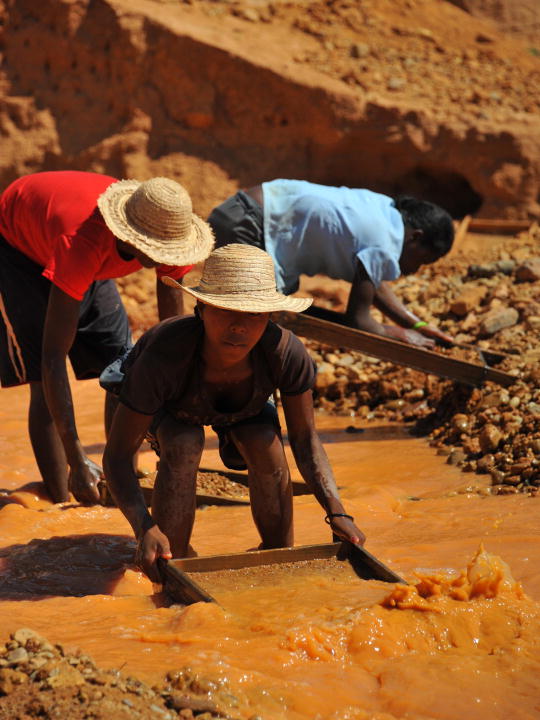 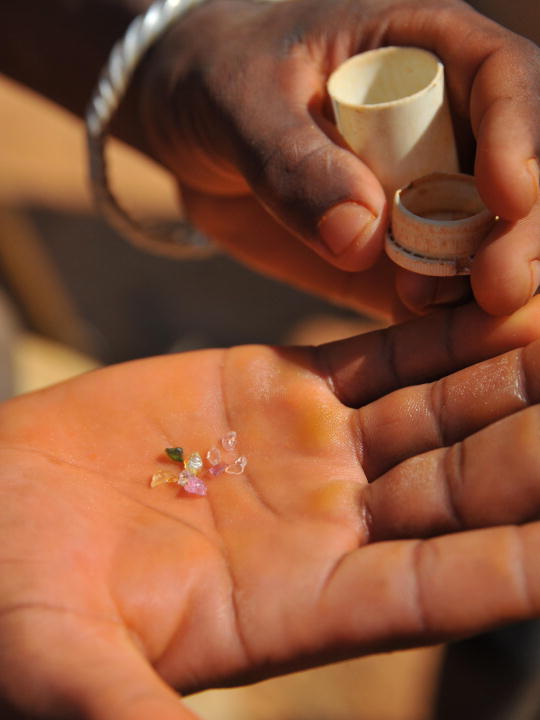 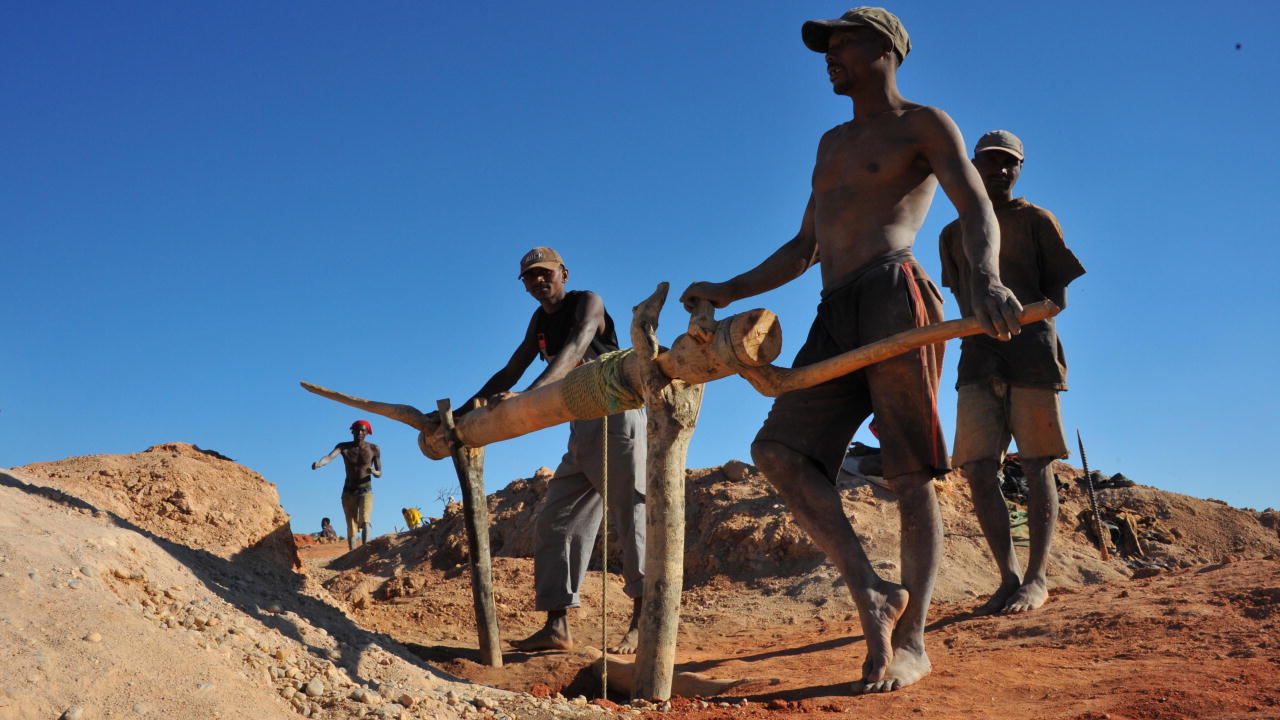 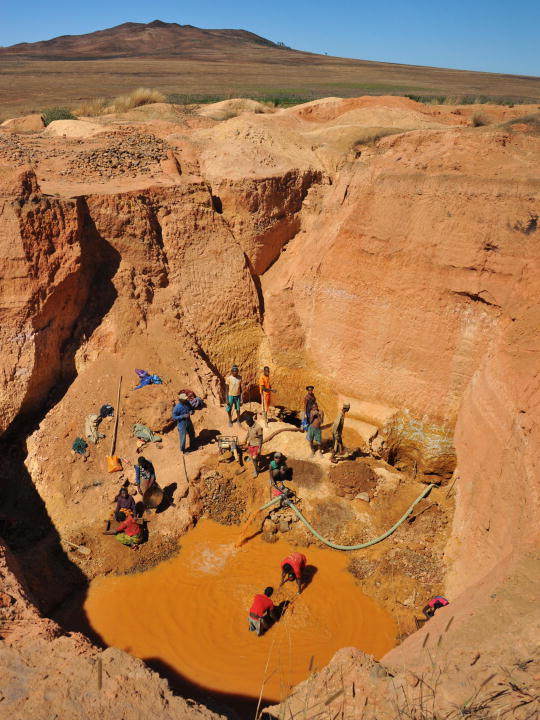 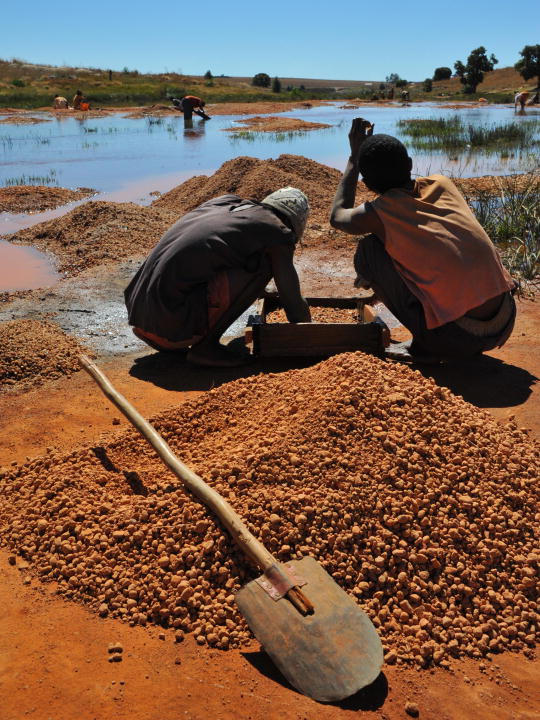 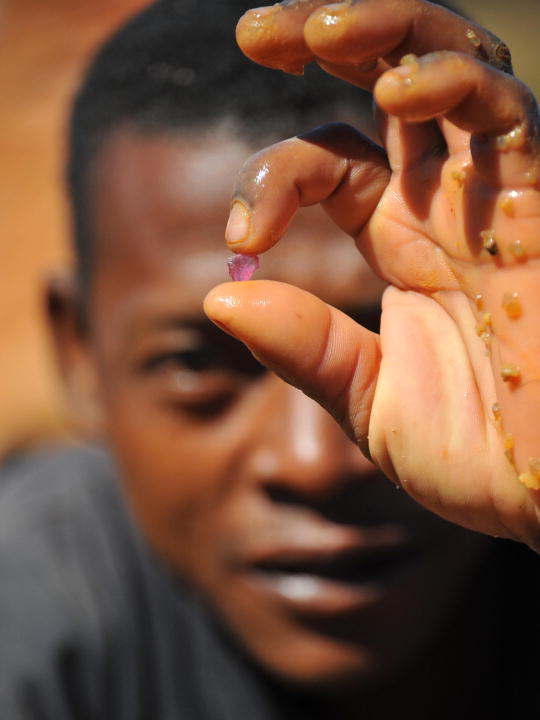 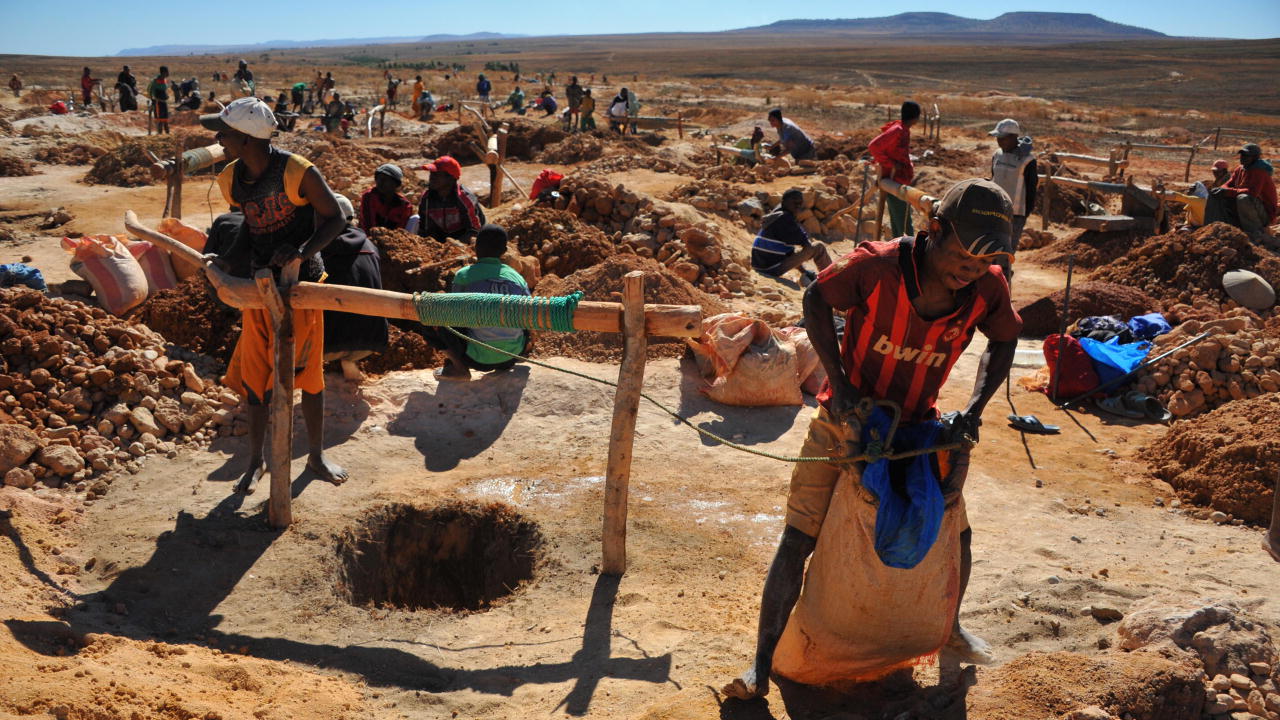 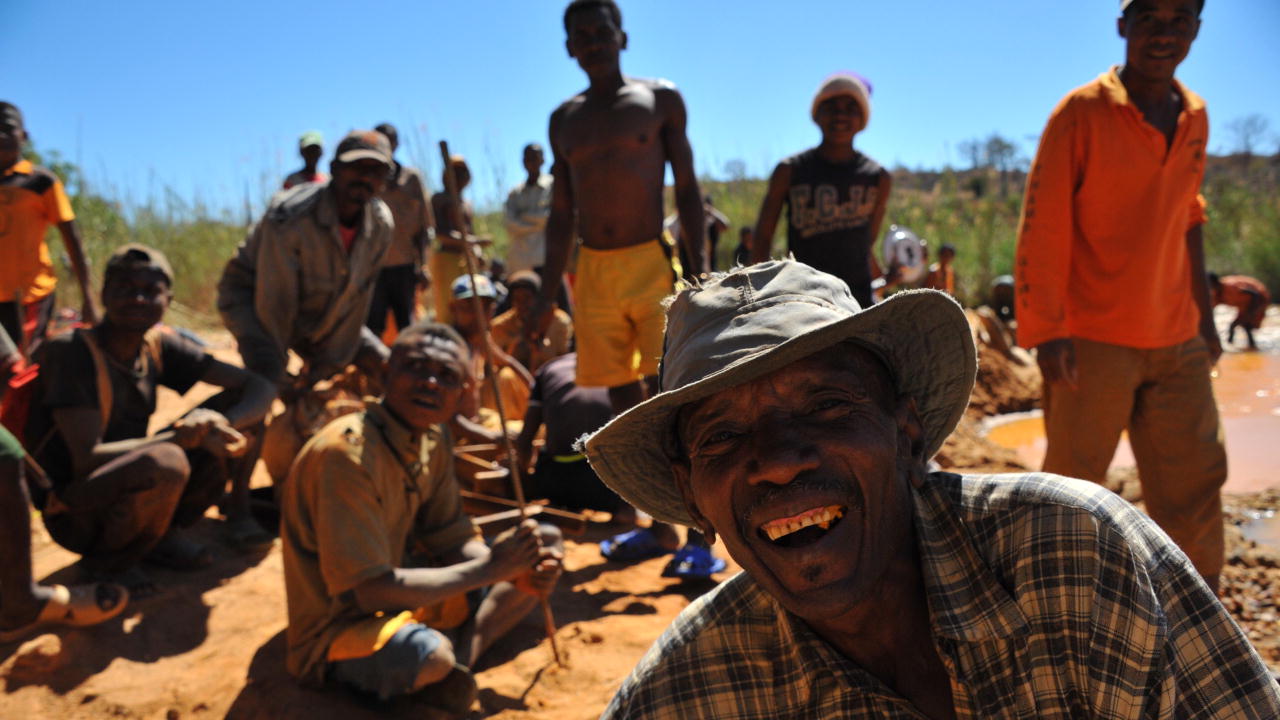 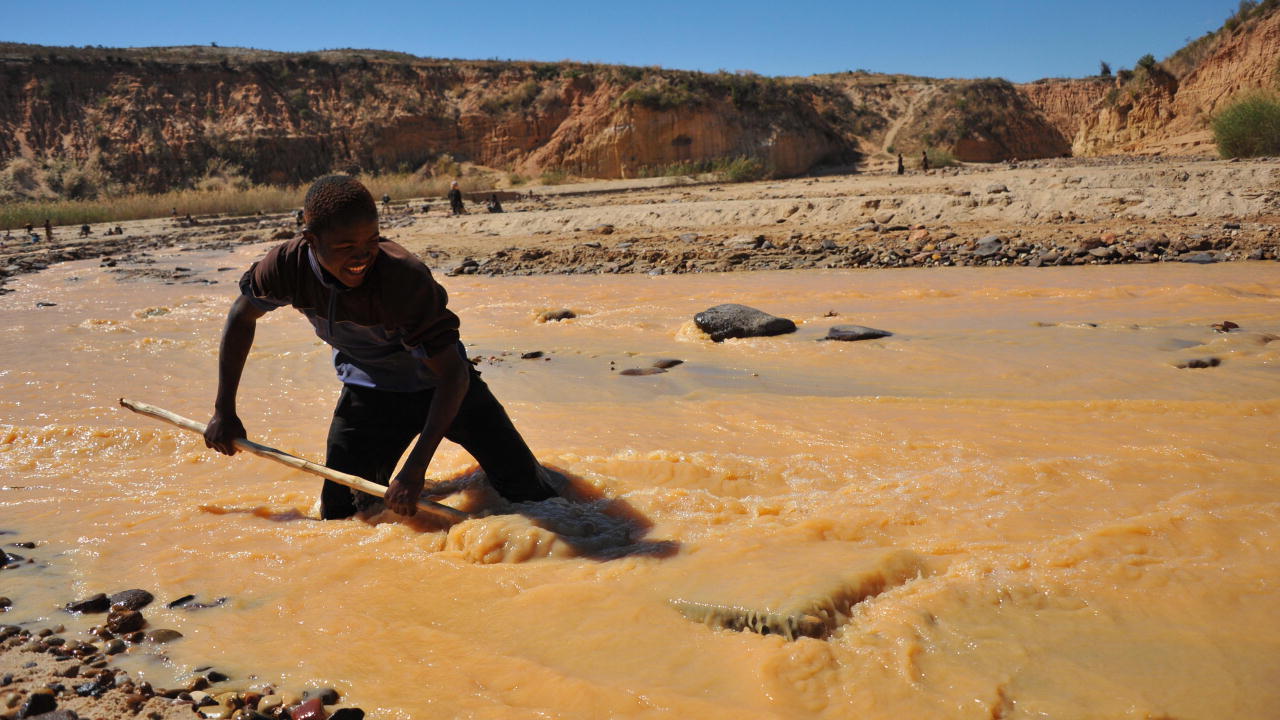 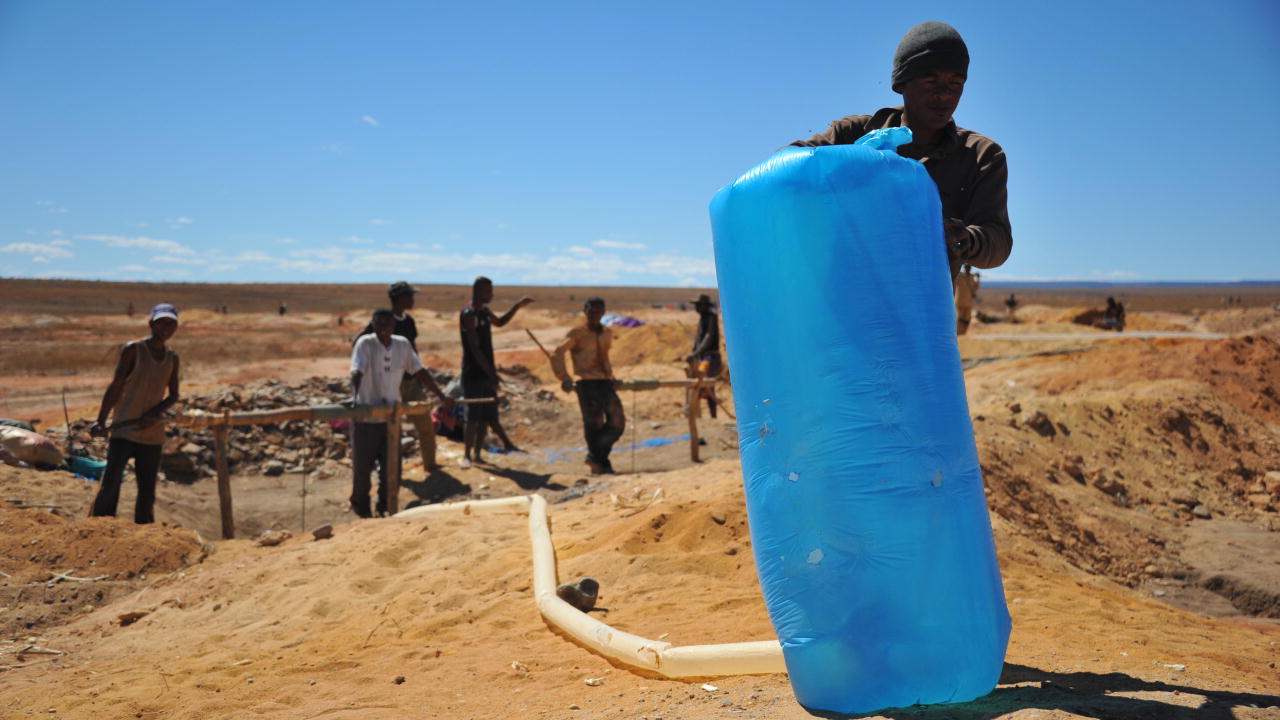 In the north-west near Antaralava, at the intersection with the sapphire-rich Fiherenana River, a narrow sandstone-rich area extends north to south between two regions containing limestone. Mining started in 2000, and in 2012 about 50 people were there.

In the south-west near Anena, on the Onilahy River, a minor rush occurred in 2005, and five years later about 100 miners were believed to be at the site. Anena is the only known deposit south of the Onilahy, a deep, powerful river not currently mined for gems. The discovery at Anena and the fact that the sapphire-rich Ilamoto and Taheza Rivers flow into the Onilahy suggest that this river is abundant with sapphires. Yet the area is too remote to attract the mechanised mining needed to work the deep sands.

Benahy River Basin: Mining along the Benahy started in 1999. The village of Vohimena soon became famous, and several mechanised operations were there from 2000 to 2011. In March 2005 an important discovery happened near Sakameloka, an area that became known for pink sapphires. Several other mechanised operations followed until late 2007, when prices for small pink rough in the Ilakaka market reportedly dropped by 90% from the year before.

Other mining villages lower on the Benahy, such as Morafena, were too remote to explore. Visiting the area from Sakameloka down to Vohimena Mahafala in 2012, the contributor observed fewer than 500 miners along that portion of the Benahy. The mechanised operations seen there from 2005 to 2010 had ceased. 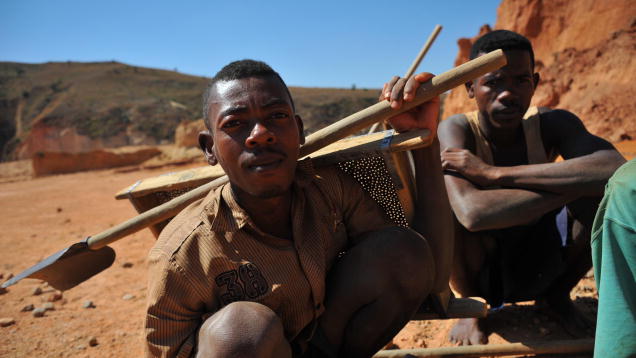 Sapphire miners pose with their hand tools at a site on the Benahy River near Sakameloka. Photo by Vincent Pardieu, © GIA.
Malio and Fiherenana River Basins: In late 1999, mining started north of RN7 in the Fiherenana and Malio River basins near Ankaboka Malio, Analamahavelona, Betikely, Maromiandra, Ankaboka Ambinany, Andralanova, Bevilany and Antaralava. Several Thai companies were operating machinery near Ankaboka Ambinany and the bridge at Bevilany. After the 2003 discovery of significant deposits near Manombo Be, Sri Lankan buyers opened offices there to intercept the sapphires before they reached the Thai buyers in Ilakaka.

By 2005, Manombo rivalled Ilakaka, but most of the evening activity now happens at nearby Sakaveero, the trading centre built circa 2007. Activity north of RN7 was reportedly weak in 2010, but in August 2012 about 1,000–1,500 locals using hand tools were scattered north of the road, including in areas of the Zombitze-Vohibasia National Park. About 400 miners were south of Manombo Be at Manombo, Misereno and Anduharano. Near Analamahavelona, the discovery of fine blue and pink stones in May 2012 attracted some 400 miners. Near Ankaboka Ambinany, a few hundred people were working different deposits around the villages north of the Bevilany Bridge, where a mechanised Thai operation used two excavators and a washing plant. Another few hundred were reportedly at Ankaboka Malio and other remote areas of the Malio River.

Taheza River Basin: Since about 2000, sapphires have been mined along the lower Taheza north of Bezaha and in the upper valley. Mining villages sprang up at Analasoa, Analalava, Mahasoa and Ambalavihy, where tens of thousands were reportedly working. Mining rights were soon acquired by large Sri Lankan companies. After attempting to mechanise, they decided to buy stones from locals instead, supporting them with food and tools. This model became very successful in the Taheza basin, and by 2008 it was probably the main sapphire region in the whole deposit. While activity in the upper basin has declined, it has increased near Antsoa, where about 5,000 people were mining and washing gravels in 2011 and 2012. In 2011 the main mining area was Mangatoka, but the next summer it was Ankaranduha, where more than 1,000 were working. In the Taheza basin the sapphire-rich gravels are usually about 30 metres deep, but some artisanal miners used a 50-metre vertical shaft to reach the gravels, which were mined by digging narrow horizontal tunnels. For the digger to breathe, air had to be sent underground using large plastic bags and tubes. The gravels were extracted and taken to the river for washing. 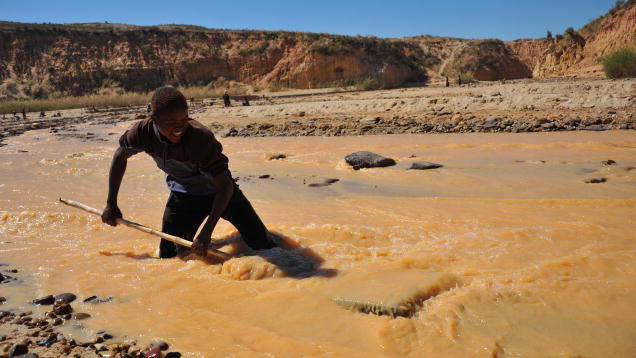 A sapphire miner works with hand tools in the Taheza River at Analalava. Photo by Vincent Pardieu, © GIA.
Due to the lack of roads, activity could not be observed on the Taheza south of Ambatomainty, where there were remnants of Sri Lankan operations. From Bezaha up to Ankilivaly, the contributor explored the lower Taheza basin in 2010 and 2012 and saw mining near Ankilitelo, Ambarinakoho and Ankilivaly. A gem rush occurred at Ambalmasai in late 2011, and the following year about 500 people were still mining that remote area. Some activity was also reported at Sarouval, about 5 km north of Ambalmasai on the other side of the Taheza. At each site, Sri Lankan companies supplied the miners with loading trucks, tools and food.

Circumnavigate the boreal reaches of the globe from Greenland, proceeding in an easterly direction to Canada to explore polar gems.

Natural pearl identification is one of the critical problems in pearl research. The DNA study of pearly molluscs and oysters facilitates the solving of this problem. To fulfil this goal, GIA sent a group from both research and education to Tennessee to sample the freshwater molluscs for DNA bar-coding. Come with us to Camden, Tennessee, to see how we dive for pearly shells.

Fossicking is a special type of mining activity that Australians love. Australia is a large country rich in many types of gem resources. Come to Australia with the GIA field gemmology team to feel the passion of gem fossicking in the southern hemisphere.