Witnessing the Creation of Jadeite Masterpieces

Gemmologists seldom get the opportunity to visit a factory staffed by highly skilled jadeite carvers and then get to see the final products in a retail store specialising in high-end jadeite. But this was what the authors experienced during their extensive trip through China and their stop in Sihui Guangdong province. We visited Mazu, a company synonymous with highly skilled jadeite artists and fine-quality jadeite carvings and jewellery.

At the carving factory we witnessed the entire production process that turns a rough jadeite boulder into an intricate object of beauty. Jadeite boulders are among the most difficult gemstones to evaluate in the rough state. Often, there is little evidence on the exterior of the quality that lies within. This is a special challenge when planning carvings, where the colour zoning becomes an intricate part of the final product. The craftsman has to begin by determining the true nature of the rough jadeite boulder’s interior.

The first step is for the artist to determine the rough jadeite’s potential and the carving design that will unlock that potential. Photo by Eric Welch, courtesy Mazu Jade Co. Ltd.
Jadeite’s colouration is commonly mottled. While it’s a challenge for jewellery when a uniformly coloured piece is desired, this characteristic is a blessing for artists who are creating intricate carvings. By incorporating the natural colour zoning of the material into the design, they achieve a balance between nature and artistry. The key is for the artist to determine the colour zoning of the rough jadeite and then select a design that will blend it into the carving’s theme.

The artist uses a torch to shed some light on the colour zoning in this rough piece of jadeite. Photo by Eric Welch, courtesy Mazu Jade Co. Ltd.
Once the rough jadeite is examined and its internal colour zoning is revealed, the artist will sketch a design for the carving. Designs are often based on classic Chinese paintings and themes. In many cases, they will depict scenes from classic Chinese life. The extent of the depiction will depend on the size and shape of the rough jadeite, as well as the nature of the colour zoning. Before carving begins, the artist might draw the design on paper while viewing the face of the rough. 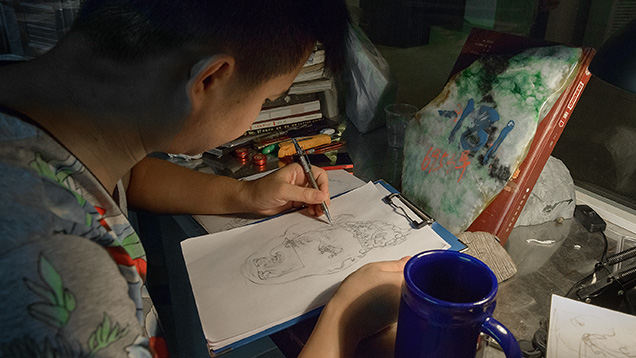 This carver is a true artist. He is sketching the design he will follow when he carves into the jadeite. Photo by Eric Welch, courtesy Mazu Jade Co. Ltd.
Once the rough has been evaluated and the most appropriate design has been chosen and sketched out on paper, the carver will transfer the design to the jadeite rough. This is a crucial step, as it directly translates the design concept into a working plan for the carving, converting a two-dimensional design into a plan for a three-dimensional carving. The first step in this process is to paint the design onto the piece of jadeite rough. 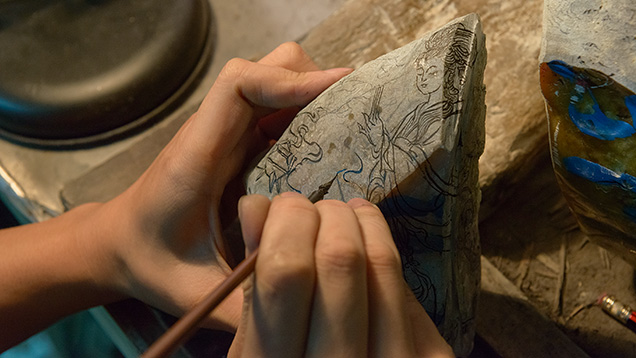 The intricate design that the carver will follow is first drawn onto the rough piece of jadeite. Photo by Eric Welch, courtesy Mazu Jade Co. Ltd.
Carving the jadeite is a time-consuming process. These highly skilled professionals often make use of burrs attached to flex shafts. As we toured the factory, we saw carvings at all stages of production, from the beginning stages where the mystery of the rough jadeite was being unlocked, to completion of the final finishing details and polishing. It was an amazing experience for us to witness the enormous complexity involved in producing a single carving. It was remarkable to witness all the stages involved. 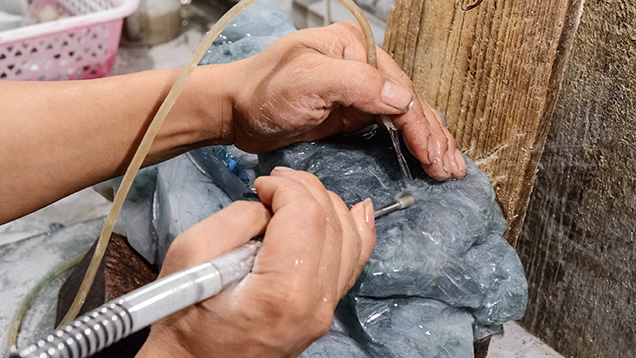 This carver is just beginning to unlock the magic inside this rough jadeite. Notice how water is incorporated to reduce heat and friction. Photo by Eric Welch, courtesy Mazu Jade Co. Ltd.
We began by observing a craftsman evaluating a rough piece of jadeite with a torch and then beginning to carve the jadeite with a burr. As we moved through the factory, we observed that the carvings were based mostly on naturalistic and traditional Chinese themes. Some jadeite carvings had amazing zones of green and lavender that were beautifully incorporated into them. 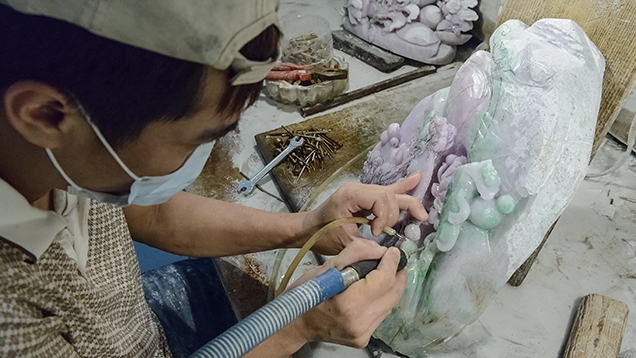 This carver incorporates the green and lavender colour zoning of the jadeite rough into the carving’s floral design. Photo by Eric Welch, courtesy Mazu Jade Co. Ltd.
Some of the detail incorporated into these carvings was truly amazing, especially considering the rough boulders that were often the artists’ starting material. Like fine sculptors, these artists gradually removed material to create the resulting designs. As more and more of the fine detail appeared, the artist would use smaller and smaller burrs to facilitate the intricate nature of the carving. The carvings’ details included fine floral or structural designs or people’s facial features. 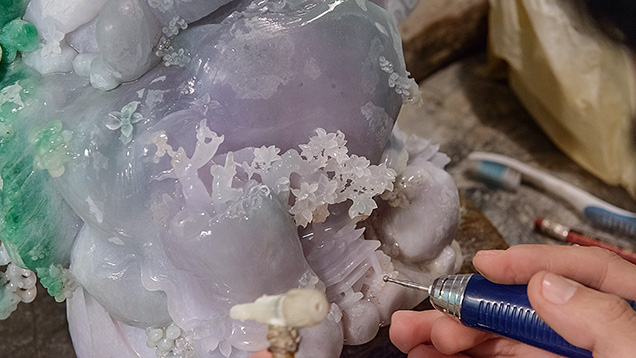 This carver uses a small burr to carve details into the floral and structural design. Photo by Eric Welch, courtesy Mazu Jade Co. Ltd.
As we continued our observations of the factory, we were impressed to see a young lady carving a Buddha figure from a piece of jadeite. I felt this symbolised the rich traditions of Chinese culture and honoured the jadeite that is embraced by, and so much a part of, this culture. Along with the rest of the nationally famous carvers and the designs they were working on, it illustrated that jadeite was not just a medium for personal adornment or artistic display, but actually part of the Chinese culture. 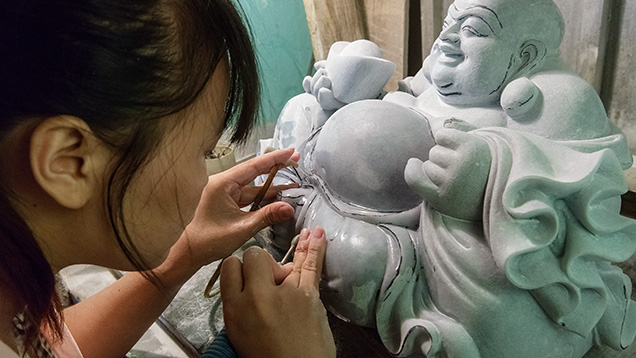 Buddha carvings are a popular jadeite theme. Photo by Eric Welch, courtesy Mazu Jade Co. Ltd.
As we were leaving the factory, we noticed a rough piece of jadeite with beautiful green zoning that was just beginning to be marked up for carving. Beside it was an almost-finished Buddha carving incorporating very light lavender and green colours. It was a striking image that demonstrated the skill and artistic eye required to see what nature offers and what it can become. 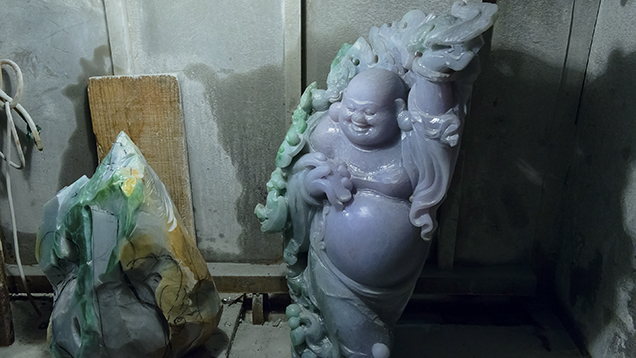 The close proximity of the starting material and the finished piece of art illustrates the talent and skill needed to make the transformation. Photo by Eric Welch, courtesy Mazu Jade Co. Ltd.

As both authors are very interested in the mine-to-market aspect of the gem business, it was a pleasure to be able to go from Mazu’s carving factory to one of their retail stores. The store and its jadeite inventory and staff were all highly impressive. We were greeted by two young ladies who proved to be very knowledgeable sales staff members. They were very well versed in jadeite carvings and jewellery, and also possessed the skills needed to describe their characteristics and qualities. 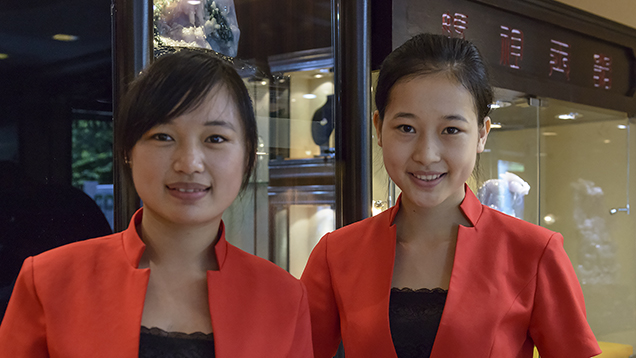 The Mazu staff members were highly knowledgeable about jadeite and eager to share their passion for this stone. Photo by Eric Welch, courtesy Mazu Jade Co. Ltd.
The store itself was designed to reflect the high-end nature of the jadeite pieces it contains. After witnessing the impressive artists working in the Mazu factory, it was even more stunning to see the store’s amazing jewellery and carvings. Various traditional carving design themes were on display. The carvings also revealed the skill needed to utilise jadeite’s colour zoning. We were struck by the high quality of the jadeite that was used as starting material for the carvings. 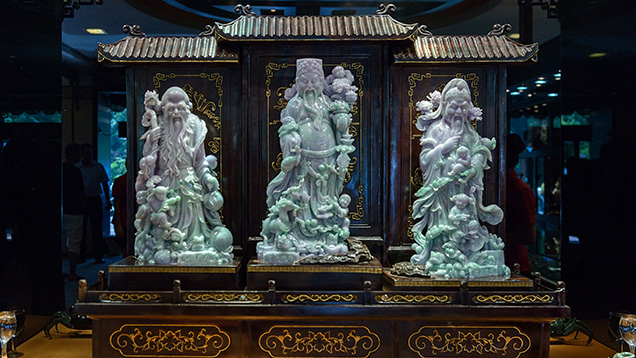 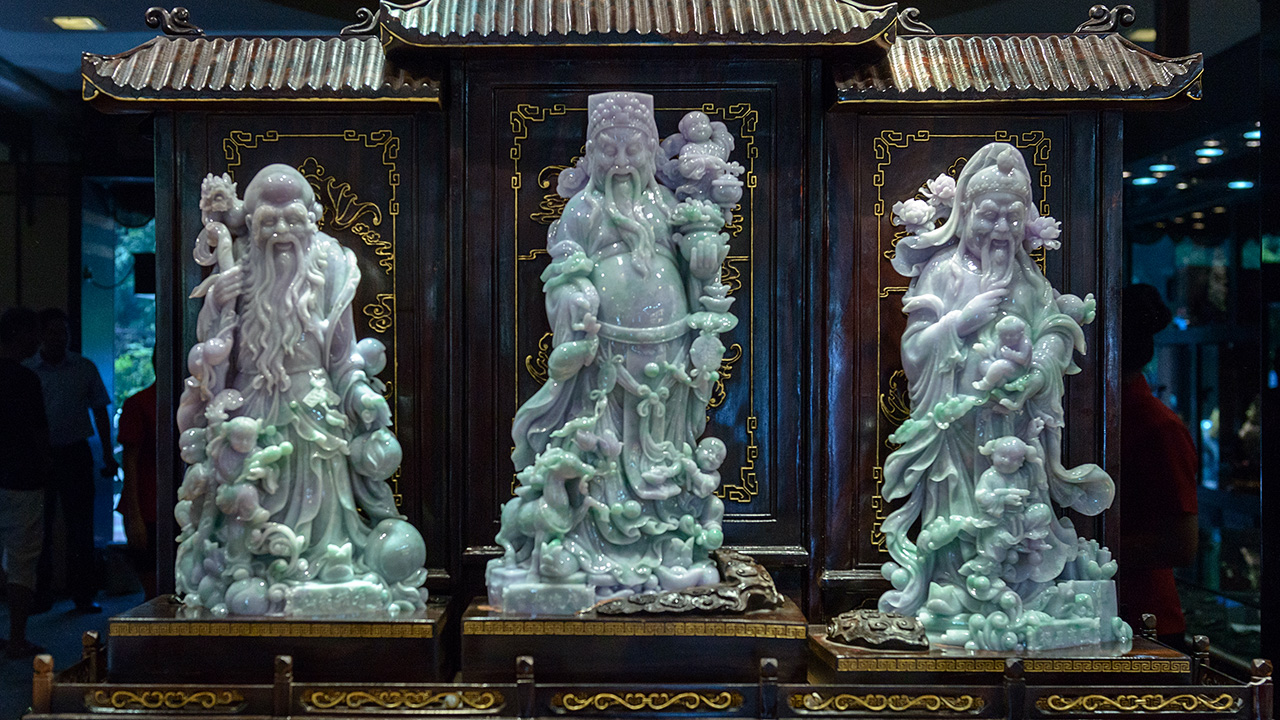 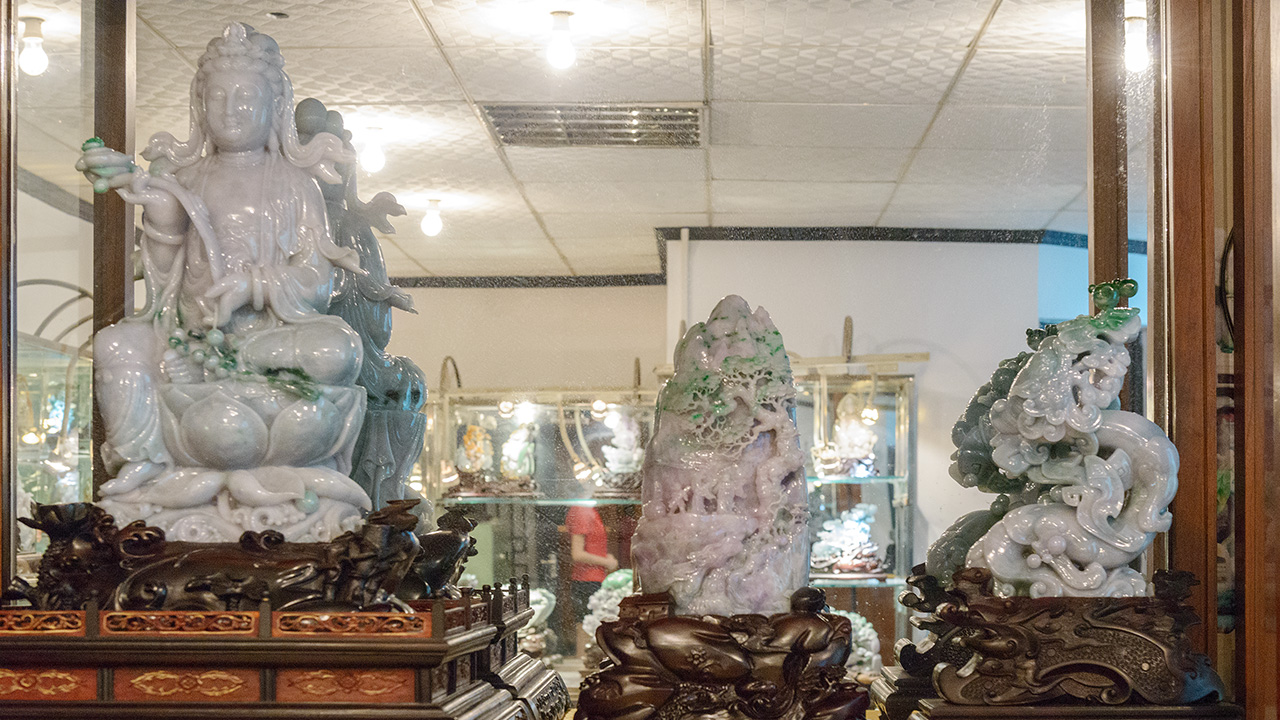 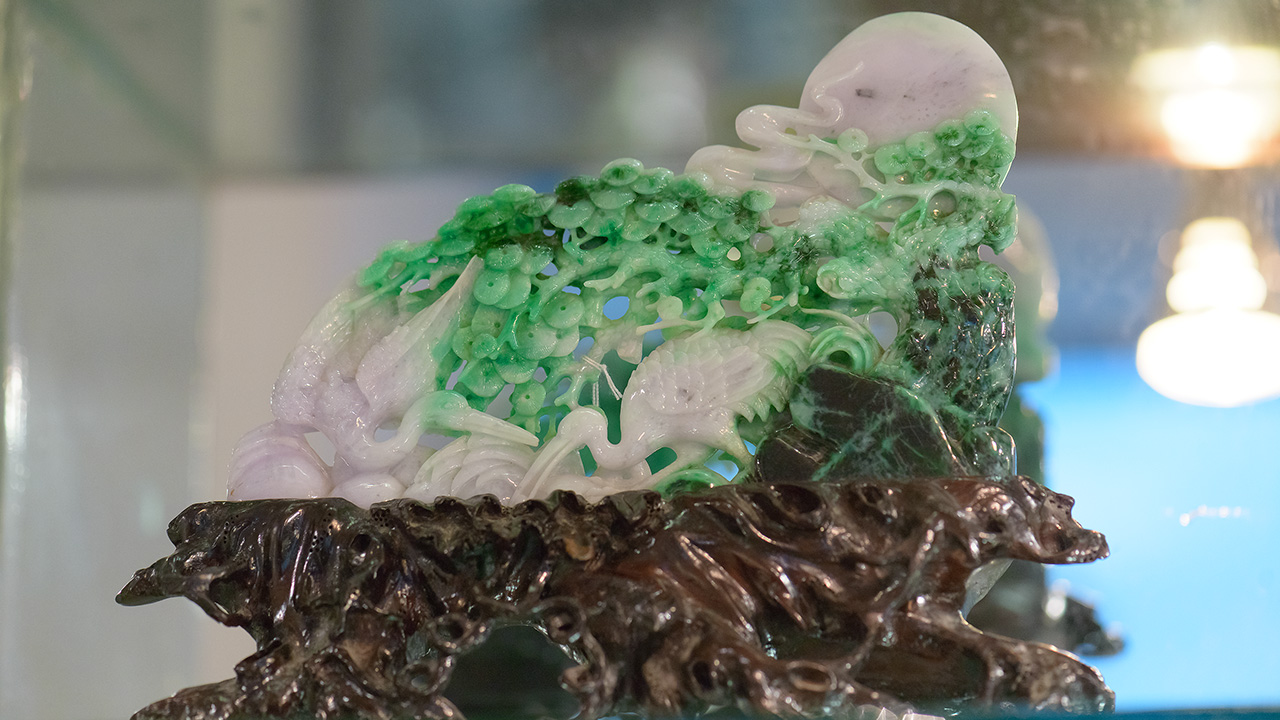 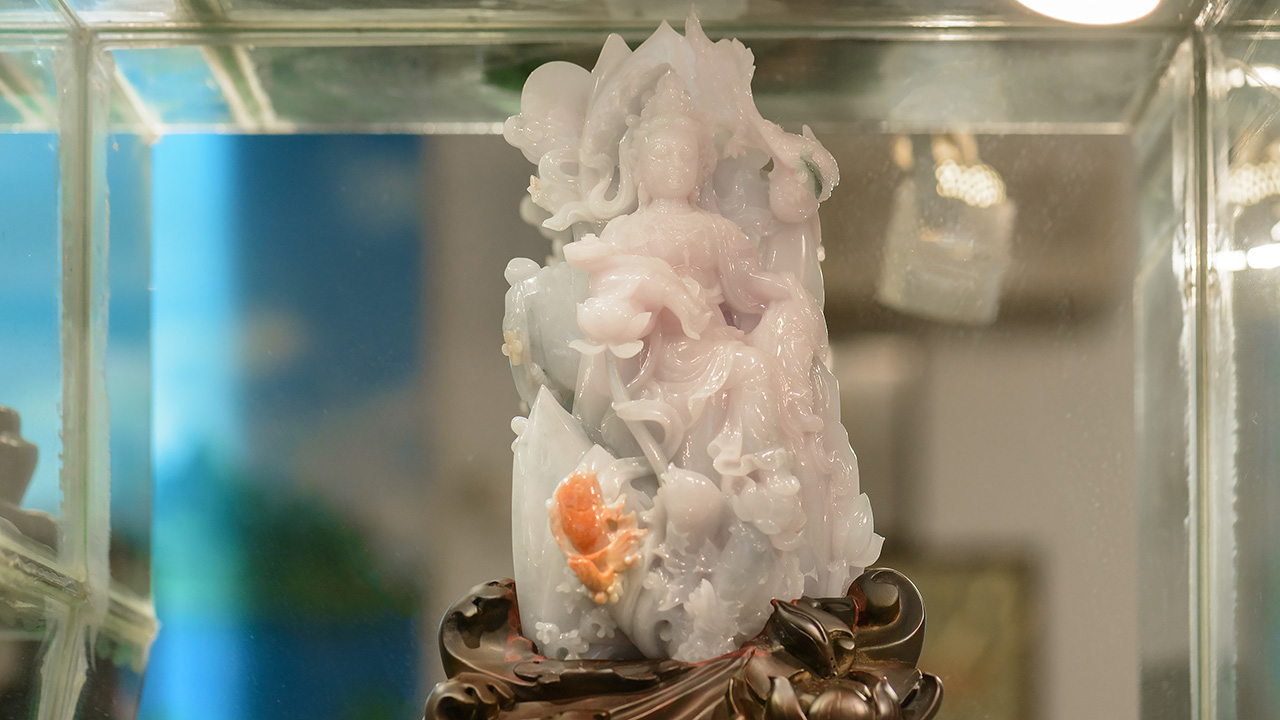 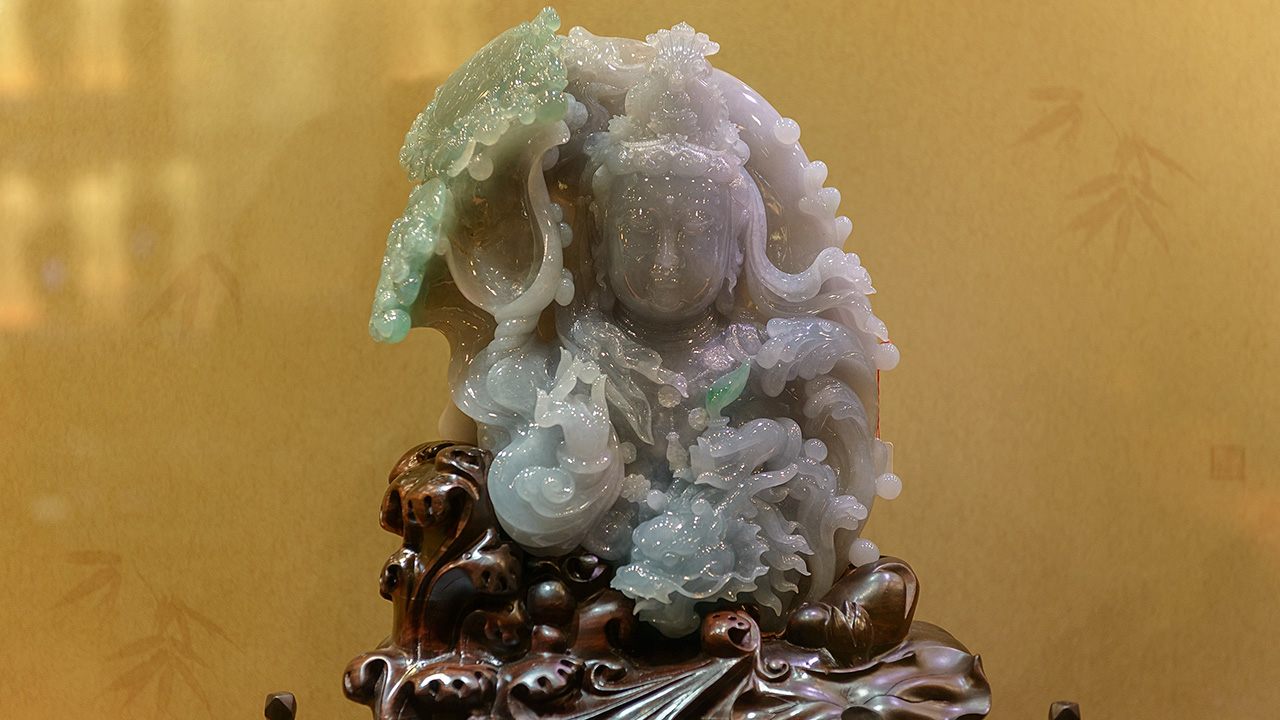 Jade Carvings
Along with the amazing carvings at the Mazu store we were able to see some beautiful jadeite jewellery pieces. One of the sales professionals modelled an incredible necklace with imperial green jadeite cabochons. She also modelled a striking green jadeite bead necklace. 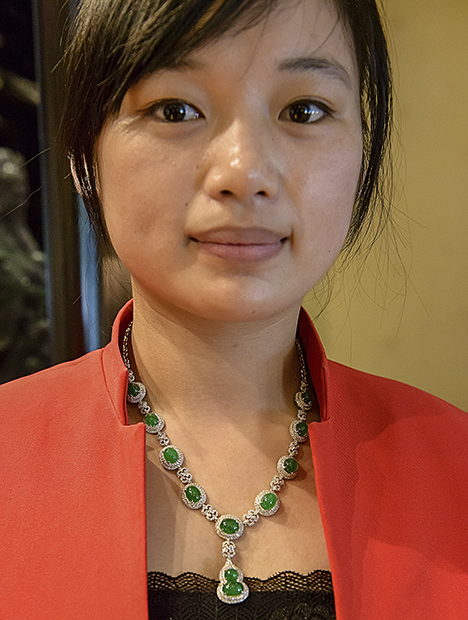 Few green gems are as captivating as jadeite. Diamond accents were incorporated to
add richness to this necklace. Photo by Eric Welch, courtesy Mazu Jade Co. Ltd.
One young lady showed us a beautiful mottled green jadeite bangle bracelet that she was wearing. The different intensities of the green colour throughout the piece added character and intrigue. The young jadeite professional explained that the nature of colour mottling in a piece is one of the more complex characteristics to consider when valuing a piece of jadeite jewellery. It’s one of many visual factors to consider when judging a colour-zoned piece of jadeite. 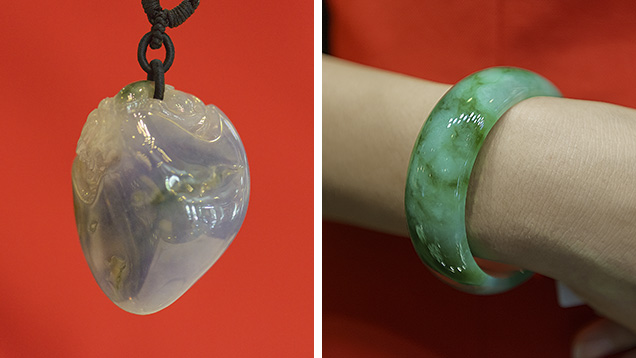 Jadeite carvings in jewellery often follow themes similar to those found in art objects, but are not as intricate (left). Colour-zoned jadeite jewellery is common, but can be complicated to evaluate (right). Photo by Eric Welch, courtesy Mazu Jade Co. Ltd.
While cabochons and beads are very common for jadeite jewellery, jadeite carvings are also popular. Carvings are not just used for art objects, but also for personal adornment. The store featured jewellery in a variety of jadeite colours.

We spent the better part of a day with our Mazu hosts. It was an incredible experience, with highly talented and passionate people sharing their expert knowledge with us. Everywhere we went, we could see the enthusiasm for their work, from the talented artists in the factory to the expert sales professionals in the store. 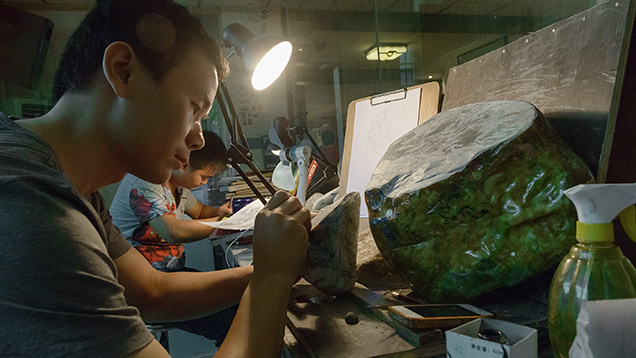 The knowledge, skill and passion we found at the Mazu factory and store was contagious and left us eager to know more about jadeite. Photo by Eric Welch, courtesy Mazu Jade Co. Ltd.
About the Authors

Dr Tao Hsu is technical editor of Gems & Gemology. Andrew Lucas is manager of field gemmology in content strategy and education at GIA in Carlsbad, California.

The authors gratefully acknowledge the staff, management and highly talented artists of Mazu Jade Co. Ltd. for their graciousness in sharing their expertise with us. Everyone from the company made every effort to ensure that our team had a successful visit.