For more than 50 years, G. Robert Crowningshield was the mainstay of GIA’s New York laboratory. After serving as a naval officer during the Second World War, he joined GIA as an instructor in Los Angeles before being sent east in 1948 to set up the New York office. In 1950, Crowningshield was named director of the New York office, where he began groundbreaking work that would take GIA and the young field of gemmology to new heights.

His first breakthrough came in 1956, when he found the spectroscopic feature for detecting yellow irradiated diamonds. The spectroscope was a largely overlooked gem instrument at the time, but Crowningshield used it to examine every transparent gemstone submitted to the lab, meticulously drawing the absorption patterns with charcoal on paper. By examining the spectra of more than 10,000 natural-colour and irradiated yellow diamonds, Crowningshield spotted the 592 nm absorption line that indicated irradiation treatment. It was a landmark contribution, one that also established the spectroscope as an invaluable tool in gem identification.

In 1970, Crowningshield reported on the new laser drilling process used to bleach dark inclusions in diamond. A year later, after General Electric announced the development of gem-quality synthetic diamonds, he wrote the first scientific study of the material. During the mid-1970s, he examined hundreds of Tahitian black cultured pearls and determined they were of natural colour, an important milestone in the trade’s acceptance of these products. His 1983 Gems & Gemology article describing the colour nomenclature of orange-pink “padparadscha” sapphires is considered the authoritative explanation for these rare and highly prized specimens.

Over a span of four decades, Crowningshield published more than a thousand brief observations in G&G’s Lab Notes column, which he started in 1957. 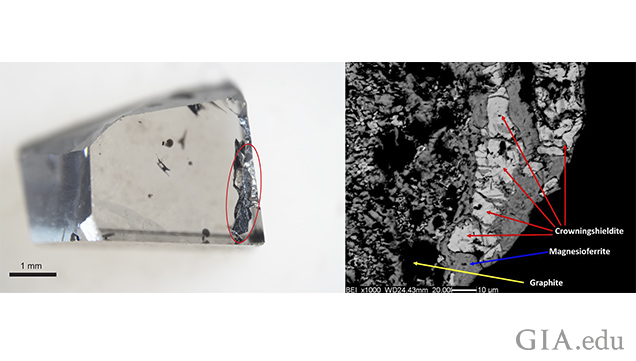 The left image shows a diamond sample that contains the newly recognized mineral crowningshieldite, in the dark area circled in red. The sample is an offcut from a larger type IIa diamond from the Letseng mine, Lesotho. The right image shows an enlargement, using an electron microscope, where individual grains of crowningshieldite are seen in a fine grained mixture with other minerals. Photo credits: Evan M. Smith (left image) and Fabrizio Nestola (right image).

GIA scientists, in collaboration with researchers at the University of Padova, discovered a new mineral and named it in honour of Crowningshield in 2018. Crowningshieldite was discovered as an altered inclusion in two CLIPPIR diamonds – a variety of type IIa diamond that forms at significantly greater depths than most diamonds – from the Letseng mine in Lesotho. Crowningshieldite is a nickel sulphide mineral with a hexagonal crystal structure and can be regarded as the high-temperature polymorph of the mineral millerite.

Stories of leaders who have shaped GIA, from past to present.