Tom Munsteiner is a third-generation gem cutter from Idar-Oberstein, Germany, a centre for fine lapidary work from the Renaissance to the present day. Training with his father, Bernd Munsteiner, in traditional lapidary techniques, combined with his studies in art and jewellery fabrication in Pforzheim, inspired him to create new interpretations of natural mineral pieces and take gem carving to the level of abstract art.

“Visions in Crystal” stands at more than 6 feet (210 cm) tall and is comprised of 264 tiles of rock crystal quartz, citrine and smoky quartz, each cut with various angular facets and measuring 60 x 40 mm. The smoky quartz and citrine tiles snake down the face of the piece, which is framed in aluminium.

He created the piece as an example of how gemstones can be seen as fine art.

“The idea for the sculpture started in Las Vegas, where we exhibit once a year at the Couture fair,” Munsteiner says. “Many of the hotels and buildings host impressive artworks in large-scale dimensions, and this brought me to the idea of creating a similarly large ornament: a whole wall of rock crystal.”

It took him two years – from concept to completion – to carve the tiles (all cut exactly the same) and put them all together in this pattern.

“The design is supposed to have contrast: The same kind of cut, facing left and right, leaves a stronger impression on the viewers,” he says. “The slight colour nuances I implemented with the smoky quartz and the citrine further support this contrast. It creates a tension within the design of the artwork, and makes it more exciting and interesting.” 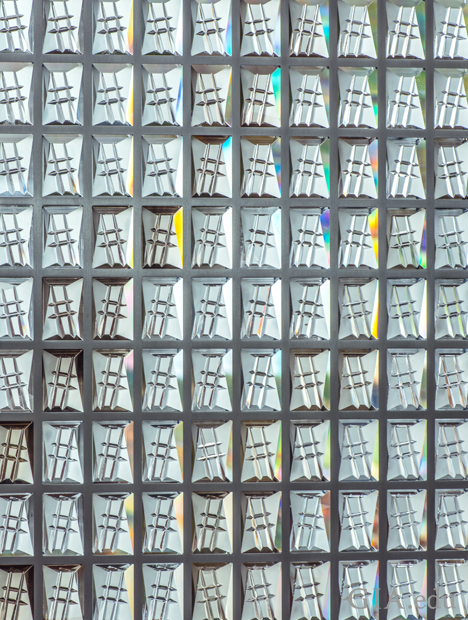 Each gem tile is cut with the same pattern, but in slightly different directions, to give the overall design texture and contrast. Courtesy of Tom Munsteiner. Photo by Robert Weldon/GIA

Terri Ottaway, Museum curator for GIA, is impressed with the amount of time and effort Munsteiner put into this piece.

“It is difficult to obtain such large quantities of gem-quality rock crystal quartz and smoky quartz,” she says. “Our visitors and students are mesmerised when they see it.”

Munsteiner says he created the piece to show that gemstones are not just meant for jewellery. “I would like people to see gemstones from a different angle, from a whole new perspective. They can be much more than a gem inside a ring or a pendant. They can be seen as art, too!” he says. “I hope that pieces like 'Visions in Crystal' will be a stepping stone to a new mindset towards gem cutting and art."