Living ‘Miracle to Miracle’: Gemmologist Reflects on 30 Years in the Colombian Emerald Trade

Ron Ringsrud’s three decades as a wholesale emerald importer − and his eventual ascent to operations and sales director at Muzo International, which sources emeralds from Colombia’s Muzo mine − are a heady mix of international business, golden opportunity, old-fashioned good timing and an entrepreneur’s hustle.

That’s all with a dash of “Yo vivo de milagro en milagro”, or, as Ringsrud translates the Colombian emerald dealer's expression: “I live from miracle to miracle.”

Ringsrud, a popular lecturer, field guide and author of 2009’s “Emeralds: A Passionate Guide”, began a career of “capricious spontaneity” in a decidedly unremarkable way: reading the classifieds. In 1980, as the Midwest native and young college graduate thumbed through the pages of the Santa Monica Evening Outlook newspaper looking for work in Los Angeles, he noticed an ad – “Warehouse Work, Gemological Institute.” He knew nothing about gemmology, but applied and got the job.

Every decade is unique in its realities of finance, economics, growth or non-growth ... When it goes great, it feels really great ... That’s the intoxication that coloured stone dealers have … you can feel the passion.

“The first thing I learned at GIA was that the best emeralds in the world come from Colombia,” says Ringsrud, whose fluency in Spanish and post-college trip to Bogotá helped pique his interest in a 1981 Gems & Gemology cover story on the subject. He signed up for GIA Distance Education courses, fervently studying at home after work, and before long, his career aspirations crystallised.

“I wanted to become a gemmologist,” says Ringsrud, who had already begun collecting annual leave days for a trip to Colombia. “I was into it.”

Supervisors noticed his drive and moved the new recruit to the Institute’s Gem Instruments department, where he became fascinated with the coloured stone dealers he met from Sri Lanka, Australia and South America – and the stories they told.

“It started getting kind of infectious,” he says. “I started wondering, ‘Can I do that, maybe?’”

Ringsrud, GG, is a scientist who also likes to talk about the “unquantifiable, non-verbal beauty of the coloured stone.” With emeralds, he says, “there is much more than just the refractive index and specific gravity.” Photo by Robert Weldon/GIA
Ringsrud took his first short visit to Colombia as a budding gemmologist over the Thanksgiving break. He knocked on the doors of those whose business cards he’d collected in Gem Instruments, made new contacts and bought his first emerald.

“In my time down there, I learned how emeralds are cut, how they’re processed and a little bit about the oil-enhancement procedures,” he says. “Back in 1981, that was a big mystery.”

Ringsrud had chatted with Gems & Gemology editor-in-chief Alice Keller on his bi-weekly trips upstairs to refill her copier paper when he worked in the warehouse, so he knew she might be interested in information about oil enhancements.

“Finally, I walked into Alice Keller’s office with a typed, five-page article about the oil enhancement of emeralds in Bogotá,” says Ringsrud. “Emeralds were a subject of interest and (enhancement was) a new subject, so I gave some of the background and the physics of the enhancement process.”

Keller, who was pleased that Ringsrud had been studying gemmology, says she had no idea he had been working on an article for the journal.

“He said he wanted to surprise me, and he did!” she says. “I was impressed when I read the manuscript and saw that not only did Ron write well, but he also had a good grasp of the level of detail and research necessary for a scientific article.”

After a strenuous editing process, Ringsrud’s article was finally ready for publication. It debuted in the autumn 1983 issue of Gems & Gemology, garnering industry recognition and awards.

“This wild thing that lives inside all of us – especially me – was eager to get out,” he says. He soon left full-time work at GIA to become an independent coloured stone dealer. 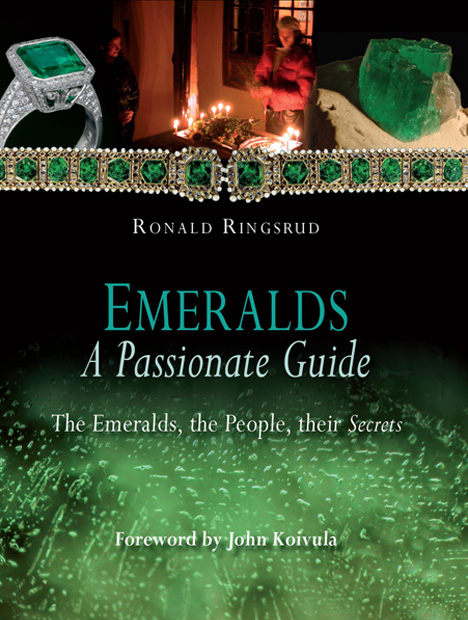 Ringsrud’s book, “Emeralds: A Passionate Guide”, was published in 2009. Former Gems & Gemology Editor-in-Chief Alice Keller, who published Ringsrud’s first article on Colombian emeralds, says of his work: “With his book and subsequent articles – his 1986 G&G piece on Coscuez emeralds is a classic – Ron has established himself as both a fine gemmologist and a respected researcher.” Book cover courtesy of Ron Ringsrud. Book cover art by Cristina Lopez of Editorial Maremagnum, Bogotá
Timing ‘Could Not Have Been Better’

His timing, Ringsrud says, turned out to be fortuitous. Though he’d missed out on the high-priced, 1970's heyday of diamonds, rubies, sapphires and emeralds, the market was vibrant and the ‘80s were “a good time to start a gem business.”

In large part, Ringsrud attributes that to the birth of the now-multi-billion-dollar diamond cutting industry, which blossomed when cutters in India noticed an opportunity with a substantial amount of smaller, “decent” rough being sold inexpensively from South Africa as industrial diamond.

“I worked in downtown Los Angeles, and I would borrow top light brown diamonds on consignment there – maybe $30,000 worth – and take them to Colombia and trade them for emeralds, or sell the diamonds outright and buy emeralds,” he says. “I’d come back and still have 70-80 days to sell the emeralds, pay back the diamond dealers and start the cycle again. My business was financed by the Indian diamond industry in the 1980s in this way.”

The following decades, though mostly successful, were full of ups and downs: Ringsrud says it’s the nature of working as an independent coloured stone dealer.

“Every decade is unique in its realities of finance, economics, growth or non-growth – we have to live through it all. It’s kind of living on the edge, and there’s an attraction to that,” says Ringsrud, who married and had two children during that time.

“When it goes great, it feels really great. Of course when it goes badly, it’s all on you. That’s the intoxication that coloured stone dealers have, and you can sense that – you can feel the passion. Because besides living on the financial edge, you’re dealing with a product that people love and associate with a connection to the earth.”

Though Ringsrud says he enjoyed that “intoxication”, it was hard to turn down the opportunity at Muzo International, which has operated the concession at the 500-year-old Muzo mine for the last six years. The company asked Ringsrud to direct its international operations and sales shortly before gaining responsibility for 100 per cent of the mine. 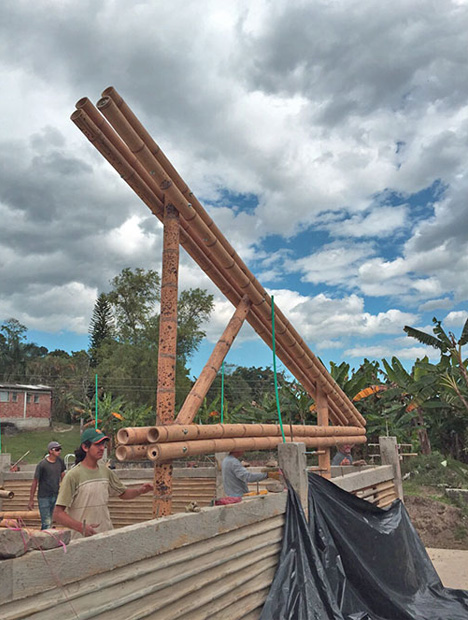 Ringsrud’s Clayhands, which has six employees, provides homes for the many displaced people in Colombia’s rural areas by training young, local men in earth-friendly, alternative forms of construction. Workers construct a concrete support for an adobe wall and guadua (“large bamboo”) roof supports for a building in Sasaima, Colombia, two hours north of Bogotá. Photo by Ron Ringsrud
The Future of Emerald Mining

Ringsrud, who maintains a home in California and one in Bogotá six blocks from the emerald district, says “they are putting technology into the Muzo mine and bringing it up to 21st-century standards of safety and technology.”

Just prior to assuming his position with Muzo International, Ringsrud founded a non-profit, Clayhands, that focuses on bringing funds from the United States to the rural areas of Colombia, where large numbers of displaced people – second only to Syria, he says – live without shelter. Clayhands supports alternative construction in these areas, training young people in modernised versions of traditional, earth-friendlier forms of construction such as adobe, pressed earth and bamboo techniques. They don’t have to pay for the vocational training or their homes, but they do have to pay a favour in return, helping build houses for others struggling in their communities.

Still fascinated with the stones that initially captured his imagination, Ringsrud says there is a need for a new generation of budding gemmologists to join the emerald trade.

“If you gaze into a crystal, you’re looking at something very deep and intimate to nature’s most intricate workings,” he says. “I think that is part of our fascination with gemstones. There is beauty, allure, timelessness, all subjective and unquantifiable. And yet the process of crystal formation is another mystery: There is great orderliness in the stacking of the unit cells; great coherence and intelligence. We need to bring out, share and celebrate the passion of these stones.

“My advice to young people is to stay fascinated,” he says. “If there is a path in front of you, it will open up, it will happen. If you can get on the coloured stone roller coaster, it’s quite a ride. Do whatever you can to get on it.”
About the Author

The oil treatment of emeralds in Bogotá, Colombia (in English)

The Coscuez Mine: A Major Source of Colombian Emeralds (in English)

The finest and rarest emeralds are sometimes said to have an optical effect called gota de aceite.