GIA’s New York lab recently encountered an HPHT-treated Fancy Vivid yellow diamond with unique inclusions. The diamond was determined to be HPHT-treated due to the presence of a strong solitary peak at 1344 cm–1 in the infrared absorption spectrum, indicating isolated nitrogen C-centers, a relatively even distribution of color, and the absence of certain peaks in the diamond’s Raman spectrum. However, the color treatment of this diamond was not its most interesting aspect. The diamond was unique for possessing many small inclusions with fine, tail-like filaments (figure 1). Visually, the filaments within this 0.164 ct round brilliant-cut diamond resembled horsetail inclusions in demantoid garnet. Raman spectroscopy of four separate inclusions gave peaks for coesite, a high-pressure SiO2 polymorph (figure 2). 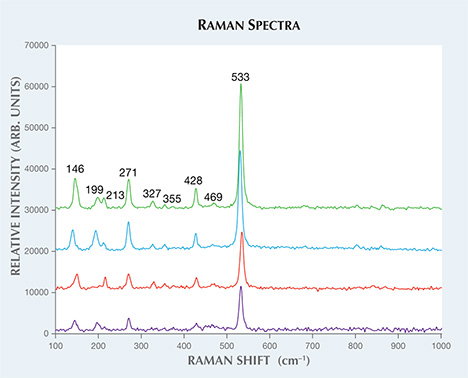 Figure 2. Raman spectra of four inclusions corresponding to coesite with high remnant
pressure inside each inclusion. Spectra have been vertically offset for clarity.

The measured peaks of coesite are shifted with respect to reference spectra due to high confining pressures within each inclusion. The shift of the main peak from its unconstrained position at 521 cm–1 to the measured peak in the inclusions, at 533 ± 1 cm–1, can be used to calculate the internal pressure, which is an incredible 4.3 ± 0.4 GPa (R.J. Hemley, “Pressure dependence of Raman spectra of SiO2 polymorphs: α-quartz, coesite, and stishovite,” in M.H. Manghnani and Y. Syono, Eds., High-Pressure Research in Mineral Physics, AGU, Washington, D.C., pp. 347–359). When a diamond is carried to the surface, the diamond and its inclusions do not decompress coherently, so it is fairly common for inclusions to have some amount of “locked-in” remnant pressure. HPHT treatment is unlikely to have modified this remnant pressure, although the possibility cannot be entirely ruled out without more detailed study. These particular coesite inclusions preserve an especially high pressure because the inclusions are small. Larger inclusions are more likely to crack or deform the surrounding diamond and relieve some of the built-up pressure.

Coesite inclusions are not uncommon in diamond, and they are interpreted to indicate an eclogitic mantle host rock paragenesis. The curvilinear filaments extending from the inclusions are, however, both uncommon and unusual. They have a preferred orientation, extending to the right in figure 1 (center). This direction corresponds with the interpreted direction of growth, outward from the center of the diamond. Most filaments are singular, measuring 20–200 µm long, but a few branch into a fan-like spray of sub-parallel filaments. The thickness of each filament is less than 1 µm, making it difficult to observe or characterize them in more detail. Interestingly, the inclusions occur within discrete regions in the diamond, which correspond to cuboid {100} growth sectors when examined in the DiamondView (short-wave UV fluorescence imaging). A possible explanation for the filaments is that they are grown-in dislocations, originating from the point where the diamond just finished enveloping each inclusion. The filaments resemble the dislocations seen in X-ray topography of natural diamonds (e.g., B. Rondeau et al., “On the growth of natural octahedral diamond upon a fibrous core,” Journal of Crystal Growth, Vol. 304, 2007, pp. 287–293). A dislocation alone, however, would not be optically visible. Small amounts of solid or fluid material trapped with the dislocation might be responsible for its visibility.

Evan M. Smith is a postdoctoral research fellow, Christopher Vendrell is a staff gemologist, and Paul Johnson is supervisor of diamond advanced testing at GIA’s laboratory in New York.