In an effort to establish standards for cut in the same manner as it has for colour and clarity, GIA began issuing reports that included a cut grade for round brilliant diamonds in 2006. This grading system is based on research conducted over the previous decade, which was chronicled in several articles published in Gems & Gemology.

GIA had been studying diamond cut for decades, when in 1989 the Institute turned a significant corner. It was at this time that new advances in computer technology allowed GIA researchers to analyse aspects of the visual appearance of round brilliant cut diamonds that it had once been impractical and difficult to explore. 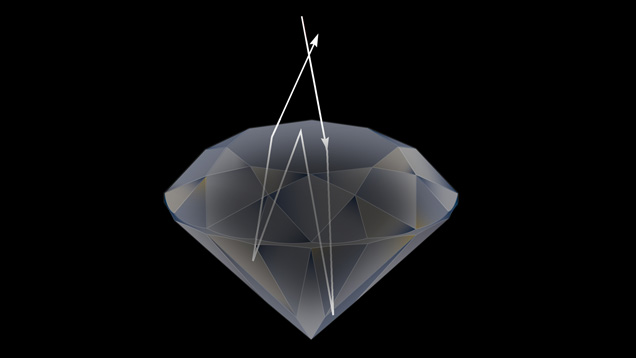 GIA developed an advanced ray-tracing programme to understand how light interacts within a diamond. This helped researchers determine which proportion combinations create a brighter and more fiery appearance.

Using advanced computer modelling, we were able to replicate the way light behaves within a round brilliant cut diamond so that we could predict how a diamond would perform with regard to brightness and fire. To study these two aspects of face-up appearance, we analysed tens of thousands of proportion sets which included: table size, crown angle, pavilion angle, star length, lower-half length, girdle thickness, culet size and total depth. We also studied the effects of polish and symmetry on appearance. We found that all of these parameters were interrelated in their effects on light performance, and contrary to some traditional thinking in the trade, that no single proportion, or subset of proportions, could be considered alone in judging diamond appearance. We found that there was a wide range of proportions that had the potential for high-quality light performance.

But that was just the beginning.

The Questions Behind Cut

We wanted to answer two important questions: First, to what degree do changes in proportion values create distinctions in appearance that can be seen by an observer? And second, which proportion sets produce results that are deemed attractive or unattractive by most observers?

With extensive observations and research, we were able to answer these questions, and more.

Development of the Cut Grading System

The GIA Diamond Cut Grading System for round brilliant cut diamonds is a predictive system that is grounded in science and research.

In an effort to validate the calculated values for brightness and fire, as well as analyse other components that contribute to a round brilliant's overall cut appearance and quality (such as scintillation, design and craftsmanship), GIA embarked on an extensive journey of observation testing using a standardised lighting environment.

Over 70,000 observations were made on more than 2,300 diamonds using observers from all sectors of the jewellery industry: diamond manufacturers, dealers, retailers and jewellery consumers. This undertaking was, without a doubt, the largest study of this type ever conducted. 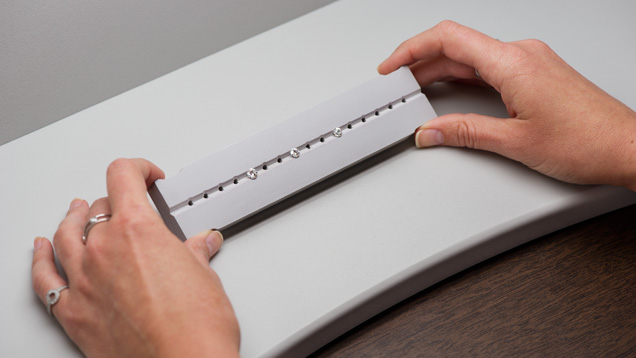 Observing real diamonds provided critical insight as to how the contrasting pattern of light and dark areas contributes to an attractive diamond.

In our experiments, each observer was asked to evaluate the brightness, fire and overall cut appearance of round brilliant diamonds representing many different proportion combinations. The results of this observation testing were vital to the development of the GIA Diamond Cut Grading System, and can be summarised as follows: 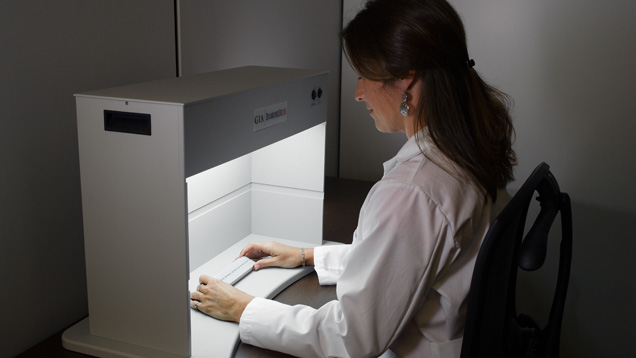 Thousands of diamonds were observed in a standardised lighting environment during the development of the GIA Diamond Cut Grading System.

Putting It All Together

Through computer modelling, observation testing and trade interaction, we confirmed that to be attractive, a diamond should be bright, fiery, sparkling and have a pleasing overall appearance, especially when the pattern of bright and dark areas is viewed face up.

In the same manner, GIA recognised that more than just face-up attractiveness should be incorporated into the assessment of overall cut quality. Quality in design and craftsmanship (as evidenced by a diamond's weight ratio, durability, polish and symmetry), even when face-up appearance is barely affected, should be considered in a diamond's final cut grade.

All eyes are on Las Vegas as the jewellery business slows down in other parts of the world.

DeBeers responds to fluctuations, and the US Federal Trade Commission issues warnings on laboratory-grown diamonds. Plus: 302.37 ct Graff Lesedi La Rona is revealed.

Learn the basics of the GIA Cut Grading System to help pick out the diamond that wows you.

Many beautiful older diamonds are cut to different proportions than modern round brilliants, which makes them a challenge to grade according to modern cut conventions. This article describes how GIA accommodates these historic gems.