Transparent, bicoloured quartz with the colours of both amethyst and citrine in the same gem is called ametrine or amethyst-citrine. The contrasting colours give it an intriguing appearance.

Fine ametrine shows medium dark to moderately strong orange, and vivid to strong purple or violetish purple. Larger gems, usually those over 5 carats, tend to show the most intensely saturated hues. Dealers look for an attractive half-and-half distribution of each colour, with a sharp boundary between the two colours at the centre of the fashioned gemstone.

Ametrine is often cut as a rectangular step cut because that style nicely displays the bicolour effect. Cutters try to emphasise both colours equally. 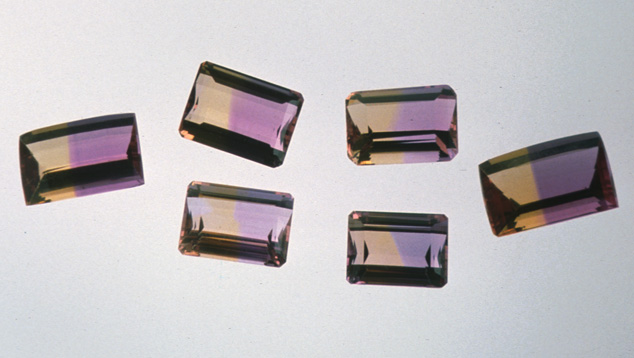 Rectangular step cuts clearly show off the striking bicolour nature of these ametrines. Photo by Maha Tannous/GIA.
Cutters sometimes fashion ametrines as mixed cuts or brilliant cuts and use internal reflections to mingle the amethyst and citrine colours. Ametrine is also popular in free-form or fantasy cuts.

Ametrine is a form of quartz in which the colours of the amethyst and citrine quartz varieties are present in the same crystal. Photo by Robert Weldon/GIA, courtesy Minerales y Metales del Oriente, Bolivia, SA. 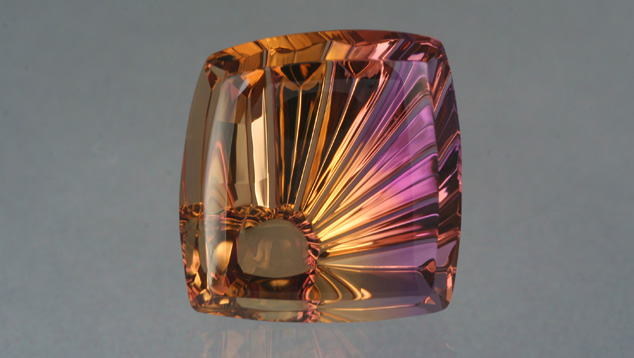 A unique display of ametrine’s colours blends and contrasts in this fantasy cut by noted gem designer John Dyer. He named his creation Ametrine SunRay ™. Photo by Lydia Dyer, © John Dyer & Co., gem courtesy John Dyer & Co.
There’s only one commercial source of natural ametrine: a deposit in eastern Bolivia, close to the Brazilian border. Legend has it that a Spanish conquistador discovered the location in the 1600s, but it was lost for more than three centuries. Ametrine began appearing on the market again during the 1970s. The mine, the Anahi, also produces natural amethyst and citrine. 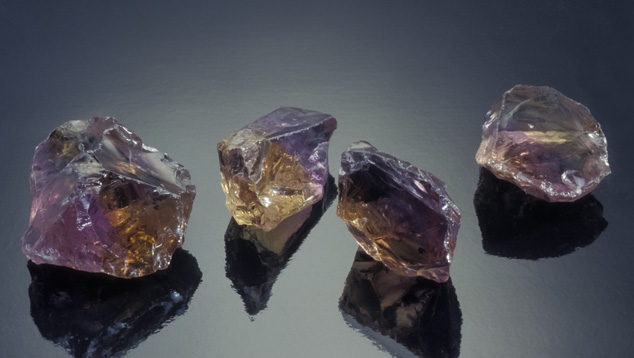 The Anahi mine in eastern Bolivia is the source of these rough ametrine crystals. Photo by Robert Weldon/GIA, courtesy Bart Curren.